In late September 2017, the Soap Factory held a symbolic groundbreaking. Soap stalwarts, artists long involved with the nonprofit arts center, board chair Roy Close, executive director Bill Mague, and then-City Council member Jacob Frey held shovels and posed for pictures around a pile of dirt. Plans were announced for a $6.2 million renovation of the 130-year-old, 52,000-square-foot historic warehouse near the Minneapolis riverfront, an area in the midst of massive redevelopment.

The building was closed in December 2017, with a grand reopening announced for May 4, 2018. In April, that was pushed to the end of October, the Soap’s 30th anniversary. In September, the reopening was moved to mid-2019.

On Wednesday, the Soap announced that it would “temporarily suspend programming as it seeks new sources of financial support.” Next Tuesday, the property will be sold in a sheriff’s sale – a public auction. The Soap explained in a release:

The decision by the Soap Factory’s Board of Directors was hastened by the realization that its future in its long-time home … is in jeopardy. RJM Construction, the contractor engaged by the Soap Factory to do a top-to-bottom renovation of the building, has incurred significant expenses on behalf of the project. In order to protect itself, RJM has taken the legal step of forcing a sheriff’s sale of the property next week. …

“The last three years have been very difficult for us financially,” said Roy M. Close, chair of the Soap’s Board of Directors. “We thought we had a path forward, but to date we have not been able to secure the financing we need to pay RJM for the work it has already done and to complete the project. RJM has been more than patient, and we are grateful, but it cannot wait any longer.”

A sheriff’s sale does not necessarily mean that the Soap Factory will have to move. Under law, the organization will have six months to raise a sum equal to the high bid at the sheriff’s sale, expected to be in the $2 to $3 million range, and reclaim title to the building.

RJM Construction is based in Golden Valley.

On Osmo Vänskä’s plans, and looking back five years

Learning last week that Osmo Vänskä will leave the Minnesota Orchestra in 2022, the end of his current contract, brought back memories of a time not that long ago when the orchestra teetered on the edge of extinction, or the brink of becoming a very different kind of organization. One in which lower-paid musicians played more pop music and less of what they had spent their lives mastering; one that had a harder time attracting top-notch musicians.

In early October 2013, the situation was dire. The musicians had been locked out for a year. Vänskä had just resigned. The concerts scheduled to open the 2013-14 season in the newly renovated Orchestra Hall, where the musicians had not yet set foot, had been canceled. So they played their own concert at the Ted Mann, calling themselves the Musicians of the Minnesota Orchestra.

Vänskä – who openly and outspokenly sided with the musicians during the lockout, something music directors don’t do – conducted for free. Guest pianist Emanuel Ax played for free. Introducing the encore, Sibelius’ “Valse Triste,” Vänskä asked the audience to please not applaud after.

Ever since, seeing the orchestra take the stage at Orchestra Hall has seemed like kind of a miracle.

Of course, it wasn’t a miracle. The musicians kept producing their own concerts, refusing to let the orchestra die or fade from public awareness. The performance with Ax was one of seven concerts that took place between October 2012 and January 2014. Three citizens’ groups formed, making waves and noise, staging protests and holding public meetings.

When the story of the lockout is told, if it ever is, attention should be paid to Orchestrate Excellence and Save Our Symphony Minnesota and the student group Young Musicians of Minnesota for keeping the faith, holding public meetings, and once (SOS Minnesota!) chaining themselves together outside of Orchestra Hall. And credit should be given to orchestra leaders who, after the lockout ended, didn’t tell Orchestrate Excellence and SOS Minnesota to take a hike, but chose new board members – MaryAnn Goldstein, Paula DeCosse, Laurie Greeno and, most recently, Jon Eisenberg – from among their ranks.

When Vänskä takes his final bow as the Minnesota Orchestra’s music director in 2022, he will have served 19 years, the same as Stanislav Skrowaczewski, who also sided with the musicians. (The orchestra’s original music director, Emil Oberhoffer, also served 19 years.) Between now and then, expect a parade of guest conductors, one of whom will become the new music director. Think of it as a four-year frisson of anticipation.

Saturday at the Black Dog: Steve Kenny “Quartets” CD release. It’s a month of milestones at the Black Dog, the Lowertown coffee house/café/bar/music venue/hang on the corner of East Prince Street and Broadway. Dec. 27 marks its 20th year in business. This Saturday marks trumpeter/composer/bandleader Steve Kenny’s 238th consecutive presentation of Saturday Night Jazz at the Black Dog, a series he curates and a jewel in the Black Dog’s crown. Kenny will use the occasion to launch his latest CD, a collection of live and studio recordings of four different ensembles performing his original compositions. 8:30 p.m. Ross Nixon’s Constellation Band opens at 7 p.m. No cover, but a tip jar will be passed. Or you can book a seat at a table near the stage. FMI and reservations ($20).

Sunday at the Ordway Concert Hall: Project Opera and Voices of Opera Winter Concert. Project Opera is Minnesota Opera’s youth training program; Voices of Opera is its community opera chorus for adults 55 and over. In honor of Project Opera’s 15th season, the program will include sneak previews of the youth opera’s upcoming productions of “Brundibár” and “The Gondoliers,” scenes and choruses from favorite operas, performances by the Project Opera Alumni Chorus and special guests. 2 p.m. RSVP here. Free or pay what you want. 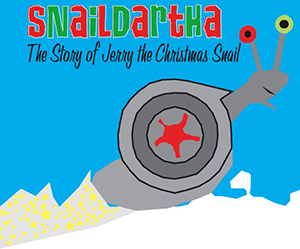 Sunday at the Turf Club: “Snaildartha: The Story of Jerry the Christmas Snail.” This weird but endearing tale of a snail who finds enlightenment has become a Christmas tradition – kind of like “Alice’s Restaurant” has for Thanksgiving. The original recording was released by Innova, the label of the St. Paul-based American Composers Forum. This will be the first-ever live performance of the soul-jazz/free-jazz show, with much of the cast from the recording: narrator/writer Matt Fugate, composer/producer Chris Strouth, saxophonist George Cartwright and Hammond B-3 organist Scott Legere. They’ll be joined at the Turf by drummer George Marich and bassist Chris Bates. With the Bad Companions and DJ Jake Rudh. 9:30 p.m. FMI and tickets ($12 advance).

Monday at Icehouse: JT’s Final Jazz Implosion: JC Sanford Quartet. After 20+ years – first at the Clown Lounge in the basement of the Turf Club, then at Icehouse – drummer JT Bates will end the Jazz Implosion series he has curated so well for so long. And he’ll go out in style, as drummer for the JC Sanford Quartet. Sanford is a trombonist, composer, 2018 McKnight Composer Fellow and recent New York transplant to Northfield. The quartet also includes JT’s brother Chris Bates on bass and Zacc Harris on guitar. They’ll premiere several new Sanford tunes as they prepare to record a new album in early 2019. $10 at the door. P.S. Jazz will continue at Icehouse. We don’t yet know what form it will take, but it’s not going away.

Tuesday at the Dakota: An All-Star TC Tribute to Roy Hargrove. One of the greatest trumpeters of his generation – many would say the greatest – Roy Hargrove died in New York on Nov. 2 after years of fighting kidney disease. He had a long and close relationship with the Dakota and performed there often over the years. We lost count long ago of how many times we’d seen him because missing him wasn’t an option. Hargrove was last here in January with his quintet. His death at 49 was a blow to the music, to many of us personally and everyone at the Dakota including club owner Lowell Pickett, who was Hargrove’s true friend. On Tuesday, area musicians will gather to honor his memory, with Justin Robinson, a longtime member of Hargrove’s quintet, as special guest. 7 p.m. FMI and tickets ($25/20).