If you’re wondering why pottery shows are popping up all over, and not just at Northern Clay Center, the answer lies in an acronym: NCECA. It stands for the National Council on Education for the Ceramic Arts, its membership includes studio potters, artists, educators, collectors, fans, galleries and organizations (like Northern Clay), and its 53rd annual conference, Claytopia, will be held at the Minneapolis Convention Center on March 27-30.

More than 6,500 people attended the 2018 conference in Pittsburgh. This will be only the second time NCECA has come to Minnesota, the first being 1995, when it was at the U of M.

Several pottery/clay/ceramics/related shows are already up and will stay in place through Claytopia, so you can check them out starting now. A few examples: “Strange Place” at Macalester’s Law Warschaw Gallery, which brings together contemporary artists from across the United States, Europe and Asia who work in video, performance, sculpture, audio, photography and mixed media. “The Form Will Find Its Way: Contemporary Ceramic Sculpture Abstraction” at the U of M’s Nash Gallery, an international exhibition with work by more than 35 artists. “Ruth Crane: A Ceramic Collector’s Journey” at the U’s Goldstein Gallery, a show of objects ranging from Arts and Crafts pottery to new works by ceramicists from across the country. “Accumulation: New Work by Monica Rudquist & Judy Onofrio” at the Catherine G. Murphy Gallery at St. Catherine University, a show of breathtaking sculptural work, some of which started as bones and some of which started on the potter’s wheel. All of the exhibitions are free, and there will be more – many more. 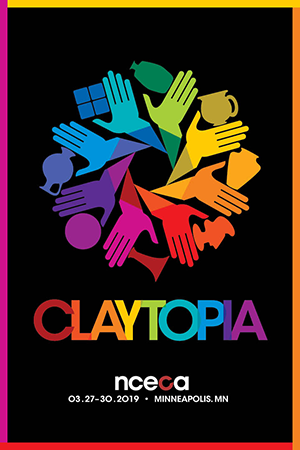 “Finding the Authentic Self,” which opens this Sunday (Feb. 17) at the Sabes JCC, was inspired by a song by Minnesota musician Dan Israel. Curated by Steve Basile, a longtime ceramics collector, founder of the Curated Ceramics website and the large, very active and occasionally scrappy Studio Pottery Collectors Facebook group, the show will feature work by 16 potters and one painter. Pieces will be accompanied by short essays, written by the artists, that address the exhibition theme. The narrative is in keeping with the Curated Ceramics website, where pots are offered for sale, but that’s not all. You get to know the artists through text (introductions, artist statements), photographs of their process and studio, portfolios, and videos.

The works this show is about – and Curated Ceramics, and Northern Clay, and the annual St. Croix Valley Pottery Tour (which draws thousands of people), and the amazing collection at the Weisman Art Museum, and NCECA – aren’t made by the thousands in factories. They are made one at a time by actual human beings. Each has a story to tell. The edge of the cup you bring to your lips was shaped by someone’s fingers.

Dave Eggers at the Parkway rescheduled

Events were canceled left and right during the Polar Vortex, but some people were still planning to brave the x-treme weather to see Dave Eggers and Mokhtar Alkhanshali at the Parkway on Jan. 30, a night of record-breaking cold. Then their flight was canceled. Prayers have been answered and everyone will try again on Wednesday, March 6.

Eggers’ latest nonfiction page-turner is the tale of Alkhanshali, a young Yemeni-American entrepreneur who decides to make coffee from Yemen great again, then gets caught up in a civil war. It’s also the story of coffee itself, and why the good stuff costs so much, and should. The award-winning author of many books and founder of McSweeney’s, Eggers is a remarkable writer, and Alkhanshali is a remarkable man whose life gets wilder and wilder. Will there be coffee? Presented by Magers & Quinn. Doors at 6 p.m., conversation at 7, book signing to follow. FMI and tickets ($10 general admission, $26 with book).

Looking for theater that won’t let you off easy? This is your weekend.

Opens tonight (Friday, Feb. 15) at the Center for Performing Arts: Art and Identity: Wing Young Huie and Jarrelle Barton. McKnight Distinguished Artist and Minnesota Book Award finalist Wing Young Huie will show images from his recent book and exhibit “Chineseness: The Meanings of Identity and the Nature of Belonging.” Barton, a young African-American man who fell in love with an ancient Chinese instrument and taught himself Chinese so he could master it, will play the guzheng, a 21-string Chinese zither. And theater artist H. Adam Harris will guide the artists and the audience in a conversation. 7 p.m. FMI and reservation. Pay-what-you-can at the door.

Now at Penumbra Theatre: “benevolence.” The second play in Ifa Bayeza’s trilogy about Emmett Till is having its world premiere on Penumbra’s stage. If you saw Bayeza’s “The Ballad of Emmett Till” in 2014, and even if you didn’t, there are many reasons to go: 1) because Penumbra, 2) because Talvin Wilks is director (and was for “Ballad,” too), 3) because the horrific death of a young black boy in 1955 changed history, 4) because we are still, as a nation, profoundly messed up when it comes to race, and we should seek out learning and enlightenment, which brings us back to 5) because Penumbra. FMI and tickets ($15-40). Closes March 10.

Opens Saturday at the Highland Park Community Center: Minnesota Jewish Theatre Company: “Actually.” Sexual consent is the timely topic of Anna Ziegler’s play, in which two Princeton students – a white Jewish woman and an African American man – must share the details of an intimate evening together before a university panel. Miriam Schwartz and JuCoby Johnson star, and right there is an excellent reason to see this. A regional premiere, directed by Harry Waters Jr. 8 p.m. FMI and tickets ($28-38). Closes March 10.

Sunday at Orchestra Hall: The Julian Bliss Septet: Gershwin and Tin Pan Alley. Last here in 2016, the former child prodigy British clarinetist will continue his love affair with Gershwin’s music in an afternoon of popular melodies and swinging tunes. The program will include original arrangements of a suite from “Porgy and Bess,” an excerpt from “Rhapsody in Blue” and songs including “I Got Rhythm” and “Lady Be Good.” You can’t go wrong. Bliss will perform with his hand-picked septet; the Minnesota Orchestra does not appear on this program. 2 p.m. FMI and tickets ($32-80).

Tuesday at the University Club of St. Paul: Readings by Writers. Poet Tim Nolan will host an impressive group of writers including Milkweed authors Michael Bazzett and Claire Wahmanholm, Graywolf author Gretchen Marquette and MadHat Press author Mary Moore Easter. Bazzett’s “The Popol Vuh,” a new translation of the Mayan creation myth, was a New York Times Best Poetry Book of 2018. Wahmanholm’s dystopic “Wilder” (rhymes with bewilder) won the 2018 Lindquist & Vennum Prize for Poetry (now the Ballard Spahr Prize for Poetry; submissions for the 2019 prize close today, Friday, Feb. 15). Marquette’s debut collection, “May Day,” was a finalist for the 2017 Minnesota Book Award. Mary Moore Easter’s “The Body of the World” is a finalist for this year’s award. 7:30 p.m. Free.

Claytopia is coming, and some shows are already up