This summer’s Twin Cities Jazz Festival – the 21st; let’s pause to consider that feat – will take place in St. Paul’s Lowertown June 20-22. A parade of jazz stars will cross the main stage in scenic Mears Park. Local bands will heat up a second stage nearby. The Larry Englund Memorial Youth Stage, named in honor of the late and beloved radio host, DJ and lifelong music booster, will feature young artists including the Walker West Combo and the Dakota Combo. Festival founder and director Steve Heckler will do his level best to fill the rest of St. Paul with live jazz, from the stage at TPT to nearby clubs, bars and studio venues.

Here’s a look at the headliners.

Hometown-vocalist-turned-international-star José James will bring his latest Blue Note project: “José James Celebrates Bill Withers.” This is not a standard tribute show by any stretch of the imagination. It’s James honoring a living artist he cares about deeply by singing his songs – “Lean on Me,” “Use Me,” “Just the Two of Us” – in his own way. James is a compelling and charismatic performer. We’ve seen this show (or variations) twice and will gladly see it again.

North Carolina-based vocalist Nnenna Freelon is a six-time Grammy nominee and a class act. She’s made a dozen critically acclaimed recordings (she’s on the Concord label) and has graced the Dakota’s stage several times over the years. Side note: her husband, Phil Freelon, designed the National Museum of African American History and Culture in Washington, D.C., among other major museum projects. Power couple!

Alto saxophonist and singer Grace Kelly made her first recording when she was 12 years old. While still a teen, she co-led sessions with the formidable Lee Konitz and Phil Woods. Now 26, she’s made a dozen albums, appears regularly in Stephen Colbert’s “Late Show” house band, writes for film and TV and is infusing her version of jazz with pop, funk and electronics.

When Detroit-born reedman James Carter comes to town, he never fails to acknowledge his former teacher, Twin Cities-based saxophonist Donald Washington. Carter’s first working quartet included Golden Valley’s Craig Taborn on keys; Taborn has since gone on to his own big things. With 20 albums to his credit, including Roberto Sierra’s “Concerto for Saxophones and Orchestra,” the versatile, powerful Carter will be here with his organ trio including Gerald Gibbs on the B-3 and Leonard King Jr. on drums.

The whole lineup and more details will be released in May. The festival is free, but VIP tickets will be available.

And the Minnesota Book Awards go to …

At the 2019 Minnesota Book Awards, held Saturday at St. Paul’s InterContinental Hotel for an audience of more than 800 book lovers and sponsors, Wing Young Huie won the Memoir & Creative Nonfiction award for “Chinese-Ness: The Meanings of Identity and the Nature of Belonging,” published by Minnesota Historical Society Press. 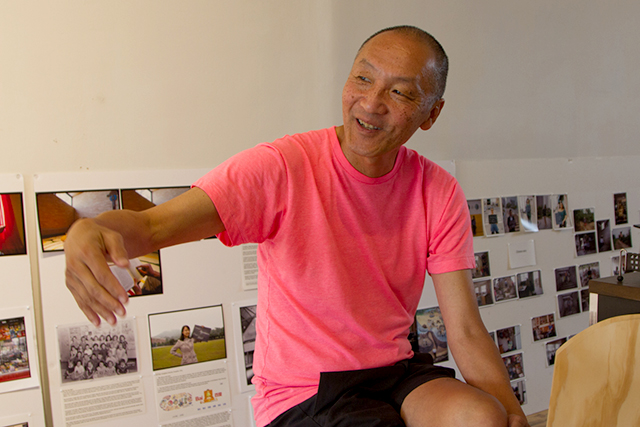 MinnPost photo by John Whiting
Wing Young Huie won the Memoir & Creative Nonfiction award for “Chinese-Ness: The Meanings of Identity and the Nature of Belonging.”

The award in Middle Grade Literature went to Pat Schmatz for “The Key to Every Thing,” a Candlewick Press book. Susan Bartlett Foote won the Minnesota Nonfiction category for “The Crusade for Forgotten Souls: Reforming Minnesota’s Mental Institutions, 1946-1954,” out from the University of Minnesota Press. Sarah Stonich’s “Laurentian Divide: A Novel,” the sequel to her popular “Vacationland,” also published by the University of Minnesota Press, won the Novel & Short Story award.

Chaun Webster’s debut collection “GeNtry!fication: or the scene of the crime,” published by Noemi Press, won the Poetry category. And the award for Young Adult Literature went to Shannon Gibney for “Dream Country,” published by Dutton Books for Young Readers.

Two previously announced special awards were presented at the ceremony. The Book Artist Award went to Jody Williams for her intriguing “For Now,” a combination book, box and puzzle exploring the number four. David Mura received his Kay Sexton Award.

Most of this year’s Minnesota Book Award winners, chosen from a field of more than 220 entries, were first-timers, and all faced stiff competition. Among the other finalists were Kate DiCamillo, Kelly Barnhill and Patricia Hampl. The Book Awards is a program of the Friends of the Saint Paul Public Library, the Library of Congress’s designated Minnesota Center for the Book.

This week is your last chance to see “Egypt’s Sunken Cities” at Mia. It’s an eye-opening, mind-blowing collection of enormous statues and small ritual objects discovered in the Mediterranean Sea off the coast of Alexandria, undisturbed for centuries until they were found by underwater archaeologist Frank Goddio and his team. We wrote a things-to-know-before-you-go piece after it opened last November. Mostafa Waziri, secretary-general of Egypt’s Supreme Council for Antiquities, was here for the reveal; we’ve since seen his name in the press countless times in articles about new discoveries made in Egypt. Which are still being made with astonishing frequency. (Recently, Waziri announced a find of mummified cats and scarab beetles. Beetle mummies!) Closes Sunday, April 14, for real.

Tonight (Tuesday, April 9, 2019) at the Minneapolis St. Paul International Film Festival: “Ensemble.” Documentary filmmaker Jean-Nicolos Orhon spent a year with the Montreal Metropolitan Symphony as they prepared for their first international tour. His film is a look at rehearsals, the musicians’ everyday lives and the role of their maestro, Yannet Nézet-Séguin. 7:05 p.m. Also tomorrow (Wednesday) at 4:40 p.m. and next Wednesday (April 17) at 4:40 p.m. FMI including trailer, times and tickets ($15/11/8).

Wednesday in the Walker Cinema: Claudia Rankine: “Notes on ‘The White Card.’” Award-winning poet, Yale professor and MacArthur fellow Rankine will discuss her new play, “The White Card,” an uncompromising look at race, privilege and the invisibility of whiteness. The play was published in March by Graywolf, which earlier published Rankine’s multiple-award-winning “Citizen: An American Lyric.” Rankine’s appearance is part of the old/new Mack Lecture Series supported by Aaron and Carol Mack – old because the Macks have been sponsoring one-off lectures for years, new because the lectures are now being programmed as a series, which means we’re less likely to miss them. The series launched last week with New York Times foreign correspondent and Isis expert Rukmini Callimachi. Which was, in a word, incredible. 7 p.m. FMI and tickets ($25/20/12).

Thursday through Sunday at the Ted Mann: University Opera Theatre presents Four Acts from Grand Opera. On the heels of Menotti’s “The Consul,” a collaboration with Arbeit Opera Theatre in March, the students of the University Opera Theatre will perform Act III of Puccini’s “La Bohème,” Act III of Verdi’s “La Traviata,” the dungeon scene from Act II of Beethoven’s “Fidelio” and a suite from Richard Strauss’s “Der Rosenkavalier.” Jeffrey Madison will direct, Mark Russell Smith will conduct. Two casts will perform. 7:30 p.m. Thursday through Saturday, 1:30 p.m. Sunday. FMI and tickets ($25/15/5). (BTW “La Traviata” is Minnesota Opera’s next production, opening Saturday, May 4.)

Friday at Orchestra Hall: Jazz in the Target Atrium: “Another One: Myra Melford Solo Piano.” The extraordinary pianist hardly ever comes through the Twin Cities. Her last time here (to the best of our knowledge) was at the Walker in 2006. Curated by Jeremy Walker since 2014, “Jazz in the Target Atrium” will not return in the just-announced 2019-20 season. So this will be the final concert of the series, and what a way to go. 8 p.m. FMI and tickets ($32).