Forget the Blood Moon, the Blue Moon and the Supermoon. From now through June 9, it’s all about the Bell Moon. Suspended from the ceiling in the Bell Museum’s lobby, visible through the floor-to-ceiling windows on the north and south, the Museum of the Moon (its proper name) was created by British installation artist Luke Jerram.

In pictures, it’s beautiful. In person, magical. It’s the moon humans everywhere have gazed at, navigated by, written poems and songs about, and – there’s a word for it – mooned over forever, up close and before our eyes, in incredible detail.

A giant, glowing moon balloon nearly 23 feet in diameter, made to an approximate scale of 1:500,000 and lit from within (not too dim, not too bright – just right), the ripstop fabric moon is covered with high-resolution NASA imagery. Each centimeter represents 5  kilometers. (An inch is about 8 miles.) What’s especially cool is you can see the side we all know, with the features we recognize: the Seas of Tranquility and Serenity, the Copernicus and Tycho craters, the Ocean of Storms. And you can walk around it to see the so-called “dark side,” which always faces away from Earth.

At a preview Wednesday night, children ran around it, people lay beneath it, artists sketched it, everyone took selfies, and a local Acroyoga group (yoga + acrobatics) did death-defying poses on the hard floor in front of it. At 9 p.m., when the sun had gone down and the Museum of the Moon was shining brightly, three U of M students played Debussy’s “Clair de Lune.”

During regular museum hours, the exhibit will feature a surround-sound composition by award-winning composer Dan Jones. And you won’t be able to lie beneath the moon. It hangs just a few feet from the floor, too close for everyone to resist the temptation to reach up and touch it.

The best time to see the sculpture is at night. It’s lit all the time, but the details don’t reveal themselves until darkness falls. The Bell’s hours are Tuesday-Sunday, 10 a.m.-5 p.m. While the Museum of the Moon is on exhibit, three after-hours events will let you experience its full glory. Tonight’s (May 22) “Night Moves” will be a look into nocturnal plant and animal behaviors, with a talk by U of M researchers Tom Gable and Joseph Bump from the Voyageurs Wolf Project. On May 29, “Moonlit Memories” will be a writing workshop with the Bell’s resident artist and poet Erin Sharkey. On June 5, at “Many Moons,” U of M Dakota Language specialist Čhaŋtémaza (Neil McKay) and indigenous linguist Kaagegaabaw (James Vukelich) will lead a talk about indigenous perspectives of the moon. Go here for a complete list of special events, including others scheduled for regular museum hours.

The Museum of the Moon is on a world tour. It’s here as part of the Bell’s “Year of Apollo,” celebrating the 50th anniversary of the Apollo 11 moon landing. Its stay also coincides with the anniversary of the Apollo 10 mission that orbited the moon from May 18-26, 1969. On June 8, the Bell will premiere its new original planetarium production, “One Giant Leap,” which will put you on the surface of the moon with Neil Armstrong.

FMI and gallery tickets ($12 adults, $10 seniors, $9 ages 3-21, free for kids 0-2, U of M students and Bell Museum members). Planetarium tickets are extra. P.S. The Bell is a Blue Star museum. Gallery admission is free for active-duty military personnel and up to five family members. Here’s more on that.

Minnesota Opera to present a new opera … for babies

Opera audiences are aging and dwindling, says everyone. Companies like Opera Theatre of St. Louis are targeting gen X-ers and millennials in an attempt to reverse that tide.

Minnesota Opera has something bigger (make that smaller) and way younger in mind: babies. Co-commissioned with Carnegie Hall and San Francisco Opera, “NOOMA,” a play on an ancient Greek word meaning breath and spirit or soul, was composed for children ages 0-2.

They won’t have to dress up, it’s OK to wear diapers and they don’t have to stay in their seats. (There might not be any seats.) The set is mainly parachutes, which become metaphors for breathing. The score is by Saskia Lane, Emily Eagen and Moving Star, a vocal ensemble in residence at Carnegie Hall. The libretto is by Zoë Palmer. “NOOMA” will be performed here by Rebecca Blackwell, Sara Sawyer and Ivory Doublette, with Bergen Baker providing theatrical support.

The six performances will take place Thursday through Saturday, May 30 through June 1, during the Flint Hills Family Festival and starting the day before. Performances are at 10 a.m. and 11:15 a.m. The opera is recommended for ages 0-4 and lasts 50-55 minutes, including free play time. FMI and tickets ($8 per person, including babies).

The Museum of Russian Art’s new executive director and president

The Museum of Russian Art’s new leader is a U of M graduate. His first museum job was at Mia. In the early 1980s, he was the first director of the Minnesota Children’s Museum. Other Minnesota ties include his daughter and grandchildren, who live here.

TMORA announced Tuesday that Mark Meister will be its executive director and president starting July 1. Meister currently serves as the ED of the Dayton Literary Peace Prize Foundation in Dayton, Ohio. Prior to that, he was president and CEO of the Dayton Society of Natural History from 2000-17.

The DSNH includes the Boonshoft Museum of Discovery, which houses a planetarium and a zoo; SunWatch Indian Village/Archaeological Park; and the Fort Ancient Earthworks and Nature Preserve. In his 18 years with the organization, Meister grew audiences, oversaw a budget of $4.8 million and a staff of 75, raised more than $30 million for programs and nearly doubled the endowment.

In the 1990s, Meister was executive director at the Archaeological Institute of America, working with many international organizations.

In a statement, TMORA board chair Chris Podas-Larson noted, “One of the things that unanimously drew us to Mark is his extensive record of building growing museums into more robust and financially viable institutions.” Search committee chair Liz Petrangelo said, “his international cultural experience dovetails well with the Museum’s efforts to reach new audiences and collaborations.”

Meister will succeed Vladimir von Tsurikov, who served as ED from 2014 until August 2018.

If you were making a musical based on Celia C. Pérez’s book “The First Rule of Punk,” whose music would you use? Maybe Patti Smith, Iggy Pop, Devo and The Germs? Or other artists in the BMG catalog? CTC will work with BMG to create the score. 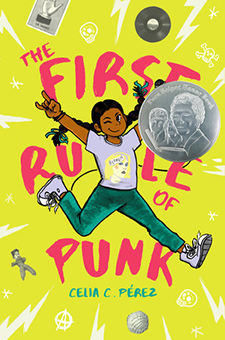 BMG’s Elyse Cogan considers it “a unique opportunity for our publishing catalog to reach new audiences and new generations.” Pérez is honored to have her book adapted into a musical by “the nation’s leading multi-generational theater … and to have BMG and their catalog of iconic artists involved with the production.” CTC’s Miriam Weisfeld calls it “a thrill to bring ‘The First Rule of Punk’ and the punk music of BMG artists together to create a live stage musical.”

Peter Brosius, CTC’s artistic director, “cannot wait to partner with BMG and bring this book to theatrical life with the drive and power of the punk music world.”

In “The First Rule of Punk,” 12-year-old Malú is a biracial, Latinx punk-loving girl who navigates a new middle school while staying true to herself. Published in 2017, Pérez’s first book won several awards, including the 2018 Pura Belpré Author Award. It was named a 2018 Boston Globe-Horn Book Fiction and Poetry Honor Book and a Bank Street Best Children’s Book of the Year.

No news yet on when “The First Rule of Punk” will rock out on the stage.