It’s a bookish week in the Twin Cities. Tonight (Wednesday, Oct. 9) at the Parkway, MPR news correspondent Brandt Williams will speak with award-winning poet Saeed Jones about his acclaimed new memoir, “How We Fight for Our Lives.” This is a Talking Volumes event, but it’s not at the Fitzgerald for a change, and Kerri Miller won’t be hosting (“due to unforeseen circumstances”). Jones’ debut poetry collection, “Prelude to Bruise,” was published by Coffee House Press. Doors at 6 p.m., show at 7. FMI and tickets ($10-30).

Swedish author Ola Larsmo is in town for a series of events around the first English translation of his award-winning novel, “Swede Hollow,” published by the University of Minnesota Press. Larsmo’s Swede Hollow is our Swede Hollow, the former immigrant community on St. Paul’s East Side.

From 1–2 p.m. today (Wednesday), Larsmo will give a talk at the American Swedish Institute. Free with museum admission. Later tonight, ASI will host the book launch, with a talk, reading, Q&A, reception and signing. St. Paul composer Ann Millikan has written an opera called “Swede Hollow,” and the launch will also feature a performance of an aria by baritone Lukas Jaeger and the Mill City String Quartet. FMI and registration ($20/$15 ASI members).

Tomorrow (Thursday, Oct. 10), the East Side Freedom Library will host a Larsmo event that includes a walking tour of Swede Hollow. You’ll meet at the library at 4:30 p.m., carpool to Swede Hollow, walk around, and walk back to the library (about 2 miles). At 6:30 p.m. at the library, Larsmo will read from his novel. Books will be available for signing and purchase. If you prefer, you can just come for the reading. Free.

The Friends of the Hennepin County Library’s 2019-20 Pen Pals series will begin with talks Thursday evening and Friday morning by Susan Orlean. The bestselling author of “The Orchid Thief” and “Rin Tin Tin” will discuss her latest, “The Library Book.” Both talks are at Hopkins Center for the Arts, and both are sold out. In fact, the whole season is already sold out, which can happen in a heartbeat when you book authors like Orleans, Ann Patchett, Esi Edugyan, Reza Aslan and Tommy Orange. Good work, Friends. 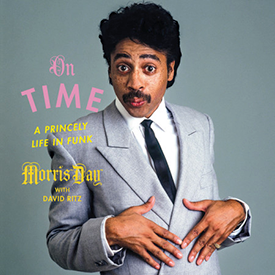 On Friday at the Mall of America, Morris Day will sign copies of his book, “On Time: A Princely Life in Funk,” just out from Da Capo. In his memoir, co-written with David Ritz, the lead singer of The Time looks back on his life, his music, and his relationship with Prince. 4–6 p.m. in the Rotunda. Free, but read this first. You have to get a wristband (starting at 2 p.m.), and to get a wristband, you have to buy a book on site.

The 2019 Twin Cities Book Festival kicks off on Friday and happens all day. We’ll give that its own space and close look in tomorrow’s Artscape.

When the 2019 National Book Awards finalists were announced Tuesday morning, they included some familiar names. Marlon James’ “Black Leopard, Red Wolf” is a finalist for fiction. David Treuer’s “The Heartbeat of Wounded Knee: Native America from 1980 to the Present” is a finalist for nonfiction. Treuer is Ojibwe from the Leech Lake Reservation. And two of the five finalists for poetry, Ilya Kaminsky’s “Deaf Republic” and Carmen Giménez Smith’s “Be Recorder,” were published by Graywolf. The winners will be announced Nov. 20 at a ceremony in New York City.

Oh, and one more thing: Just before Artscape went on break, the Friends of the Saint Paul Public Library announced big changes to the annual Minnesota Book Awards ceremony. This year, it will move to the Ordway Concert Hall. More people will be able to attend, all tickets will be more affordable, and the Friends will partner with writing programs and literary organizations to offer free tickets to emerging writers. Plus judges will now be paid a $350 stipend. And the Moving Words program, which brings Minnesota Book Awards winners to libraries across the state, will expand to schools.

As part of its recently completed strategic planning process, the Friends committed to more equity and inclusion in its work. These are all good moves in that direction. We look forward to the next big bash on April 28, 2020.

Now at the Guthrie: “The Glass Menagerie.” We’ve probably seen Tennessee Williams’ poignant, poetic semiautobiographical play four or five times. But we’ve never been so moved as we were by this production. Joseph Haj’s masterful direction made us see the characters in new ways, and more deeply. It’s easy to dismiss Amanda as shrewish and stuck in the past, Laura as sad and pitiful, Tom as trapped, and Jim, the gentleman caller, as shallow and marginally caddish. (The 21st-century word “mansplainer” comes to mind.) Haj draws nuanced, committed, compassionate performances from each of his actors – Jennifer Van Dyck as Amanda, Carey Cox as Laura (and yes, it matters that Cox is an actor with a disability), Remy Auberjonois as Tom and Grayson DeJesus as Jim. We wanted to save them all and kick Tom in the pants. The Wingfields’ apartment seems shut off from the world, with a tall, prison-like fire escape looming in the background. Tiny star-like lights slowly drop down and rise again, creating moments of wistful magic. Evening performances and matinees on the thrust stage. FMI and tickets (start at $25). Closes Oct. 27.

Now at the Mpls Photo Center: “Not Accepted.” The 11th year of the Center’s proudly presenting photographs that were submitted to the Minnesota State Fair but didn’t get in. Tuesdays through Saturdays, 11 a.m. – 6 p.m. Free and open to the public. Closes Oct. 18.

Thursday through Sunday at the History Theatre: “Gloria: A Life.” Charity Jones is Gloria Steinem in Tony winner Emily Mann’s play about the former Playboy bunny (OK she was undercover) who became a feminist leader and inspiration to millions. The first act tells the story of her life; the second act is an audience-participation talking circle. The entire cast and much of the crew are women. 7:30 p.m.; Sunday matinee at 2 p.m. FMI and tickets ($15-53). Closes Oct. 20.

Sunday at Roseville Lutheran Church: Metropolitan Symphony Orchestra. The civic orchestra with the stellar reputation – who else could claim Dominic Argento as its composer laureate? – launches its 38th season with a program no one has ever heard before. The first part is an MSO commission and world premiere, and the second is a surprising pairing with the first. William Schrickel will conduct the MSO in “The Twelve Dancing Princesses,” in which storyteller and narrator Kevin Kling will channel the Brothers Grimm to new music by the Children’s Theatre Company’s Victor Zupanc. This will be followed, we kid you not, with Shostakovich’s Violin Concerto No. 1 in A minor, with violinist Sarah Wright. 4 p.m. Free.