Parks’ great-niece, Robin Hickman-Winfield, is CEO and executive producer of the St. Paul-based media company SoulTouch Productions. She’s also the curator of the Minnesota Museum of American Art’s new exhibition, “A Choice of Weapons, Honor and Dignity: The Visions of Gordon Parks and Jamel Shabazz,” which opens tomorrow (Thursday, Jan. 23).

The title was inspired by Parks’ 1966 autobiography “A Choice of Weapons” and his words: “I chose my camera as a weapon against all the things I dislike about America – poverty, racism, discrimination.”

Brooklyn-born photographer Shabazz has been hailed as the Gordon Parks of his generation. He has had many solo exhibitions and authored several books including the now-classic title “Back in the Days,” which documents the hip-hop scene from 1980-89. He’s the subject of a 2013 documentary, “Jamel Shabazz: Street Photographer.”

The M’s exhibition features photographs that document expressions of dignity, honor, hope and love in the African-American community. But it’s more than about the pictures on the walls. Many events have been planned around the show, which will stay up at the M through April 19. So it’s also about history and relationships, empowering communities and lifting up black voices.

Both Hickman-Winfield and Shabazz will be at tomorrow’s opening party (Thursday, Jan. 23) at the museum. Meet, mingle, see the show, enjoy music and a cash bar. 6-8 p.m., remarks at 7 p.m. Free. RSVP requested.

On Saturday, Jan. 25, the M will host a conversation between Shabazz and Hickman-Winfield. They’ll talk about the show and their own deep bond, forged over their shared commitment to social justice, black youth and the healing power of art. 1 p.m. Free. RSVP requested.

On Sunday, Jan. 26, Hickman-Winfield and her four co-curators from Gordon Parks High School will lead a tour of the exhibition. 1 p.m. Free. ASL. RSVP requested.

On Saturday, Feb. 1, the Hallie Q. Brown Community Center will host an event called “Gordon Parks’ Legacy in the Twin Cities.” If you have a story, photograph or memento to share about the time Parks spent in the Twin Cities, Hickman-Winfield and her student co-curators want to meet you and hear from you. 10 a.m.-2 p.m. Free. Memorabilia gathered on this day will help shape a companion show, “Gordon Parks: A Homecoming,” that will open at the M on Saturday, March 7.

Family Day on Sunday, Feb. 16, will focus on “A Choice of Weapons, Honor and Dignity.” The day will include creative activities and a story hour with Justice Alan Page. 1-4 p.m. Free and open to the public.

Tonight (Wednesday, Jan. 22) at the Dakota: Kneebody. Every band communicates in its own way. Kneebody has invented its own cueing system that allows each member to change the tempo, key or style in an instant. In other words, they might go from fierce, all-out improvisation to nuanced chamber ensemble before your eyes. The Grammy-nominated leaderless quartet – keyboardist Adam Benjamin, trumpeter Shane Endsley, saxophonist Ben Wendel and Nate Wood, who plays both drums and bass – are touring behind their latest, “Chapters.” 7 and 9 p.m. FMI and tickets ($15-30).

Tonight at the Hamline Midway Library: Fireside Reading Series: William Kent Krueger. The Friends of the Saint Paul Public Library will launch its popular winter author series with the crowd-pleasing Krueger and “This Tender Land.”  Not a Cork O’Connor mystery, Krueger’s latest is a companion to “Ordinary Grace,” which won the Edgar Award for Best Novel of 2013. With coffee, cider, cookies and a signing. FMI. Free. 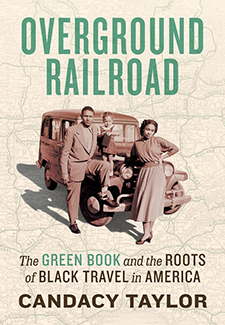 Tonight at Magers & Quinn: Candacy Taylor presents “Overground Railroad: The Green Book and the Roots of Black Travel in America.” For many white Americans, the controversial Oscar-winning film “Green Book” was the first they heard of the “bible of black travel.” But what was it, how did it happen, when was it published and why was it so important? Award-winning author, photographer, and cultural documentarian Taylor lays out the history in a big, beautiful book, published by Abrams, that’s earning high praise. 7 p.m. FMI. Free.

Thursday at Mia: McKnight Discussion Series: Emily Liebert, Jim Denomie, Chris Larson. Liebert, curator of contemporary art at the Cleveland Museum of Art, sits down for what should be a fascinating discussion with two artists. Denomie, primarily a painter of narrative work, is a member of the Lac Court Oreilles Band of Ojibwe. He lives and works in Franconia. Larson is a multimedia artist based in St. Paul, an associate professor of art at the University of Minnesota, and co-founder of Second Shift Studio Space of St. Paul. The two artists have very different practices but at least one big thing in common: Both were 2018 McKnight Visual Artist Fellows. In the Pillsbury Auditorium. 6:30 p.m. Free, but tickets are required.

Thursday through Sunday at Lyric Arts Main Street Stage: “Bloomsday.” Thankfully, reading James Joyce’s “Ulysses” is not a prerequisite for seeing and enjoying Steven Dietz’s play. Though, like “Ulysses,” “Bloomsday” is set in Dublin and takes place over a single day. Dietz introduces the element of time travel as two people relive the events that briefly brought them together. Elena Giannetti directs a four-person cast that includes Lolly Foy and Gillian Constable as Cait and Caithleen, Jeffrey Goodson and Brandon Homan as Robert and Robbie. Ages 14 and up. FMI and tickets ($30-35). Closes Sunday; this is the final weekend.