On the heels of announcing last Tuesday that it will resume live performances in early August, the Minnesota Orchestra on Friday unveiled its complete 2020-21 season.

Music director Osmo Vänskä said in a statement, “As we look to the 2020-21 season, it is music that gives us hope and that will bring us together to reflect, heal and celebrate. The communal concert experience has always been sacred to me, but in the season ahead it will have an extraordinary new meaning for us all.” Amen to that.

The season will open Sept. 24-26 with Vänskä conducting and Jean-Yves Thibaudet at the piano. On a program that also includes music by Montgomery, Rossini and Berlioz, the orchestra and Thibaudet will play Scottish composer James MacMillan’s Piano Concerto No. 3, “The Mysteries of Light,” which had its premiere here in 2011.

From there, the orchestra’s calendar is filled nearly every weekend and many weekdays through the end of June 2021. The 115 performances will include large concerts (Beethoven’s Ninth in November, with the orchestra, soloists and the Minnesota Chorale) and small (yoga classes and guided meditations featuring a Minnesota Orchestra musician or duo).

A dozen guest conductors will lead classical subscription concerts, six returning and six making their debuts. (Remember, 2020-21 is Vänskä’s next-to-last season as music director. Guest conducting gigs might double as auditions.) Among the 31 returning and debuting guest soloists will be Kirill Gerstein, who performed in the orchestra’s historic March 13 broadcast-only concert.

The orchestra will play more than 20 works for the first time, including Missy Mazzoli’s “Sinfonia (for Orbiting Spheres)” and 13 compositions by women including Lera Auerbach, Lili Boulanger and Du Yun.

The first half of January will be given over to a Dvorák Festival, starting New Year’s Eve when principal cello Anthony Ross plays the Cello Concerto. Beethoven, whose 250th birthday year the orchestra planned to celebrate in its reimagined Summer at Orchestra Hall, now postponed until 2021, will be heard in four programs.

Four Chamber Music in the Target Atrium concerts, designed by orchestra musicians, will each focus on a unique theme: Inspirations, Architecture (of the musical kind), Reflections and Character. Three Symphony in 60 concerts – the full orchestra experience, only shorter, with earlier start times – will feature music by Dvorák, Tchaikovsky and Brahms.

The orchestra will perform and record two Mahler symphonies, the Third and the Ninth, with the exacting Swedish record company BIS, in its continuing exploration of Mahler’s masterworks. The Third was supposed to close the 2019-20 season but has been rescheduled for March 2021.

The season will include more than 30 performances for young audiences and families, from Sensory-Friendly and Relaxed Family Concerts to Young People’s Concerts and Symphonic Adventures events. Among the films featured in the Movies & Music concerts, part of Live at Orchestra Hall, are Disney’s “Toy Story,” “Harry Potter and the Order of the Phoenix” and “Star Wars: Return of the Jedi.”

Christmas will feature the return of Minnesota Orchestra trumpeter Charles Lazarus’ “Merry and Bright” (for the sixth consecutive season); the orchestra’s own holiday show, “Home for the Holidays,” stage directed by Theater Latté Da’s Peter Rothstein; “An Evening With George Winston,” a solo concert; and “Audra McDonald with the Minnesota Orchestra,” a mix of holiday music, art songs, pop tunes and Broadway classics by the six-time Tony winner.

Other highlights include Stephen Paulus’ “To Be Certain of the Dawn,” a special performance commemorating the 75th anniversary of the liberation of World War II Nazi death camps, and the U.S. premiere of a new work by Anders Hillborg. TV host and travel writer Rick Steves will bring his popular “Rick Steves’ Europe – A Symphonic Journey” to Orchestra Hall in March, with Sarah Hicks conducting.

View the season online. Subscription packages are available now. Individual tickets go on sale to the general public on Aug. 12.

Catching up with Sheila Smith

Last week, Minnesota Citizens for the Arts and Creative Minnesota released a message to Minnesota’s arts community titled “We Are United.”

They came together in virtual meetings under the banner of Creative Minnesota, a project Sheila Smith chairs (along with serving as executive director of Minnesota Citizens for the Arts). You can read the complete statement here. For artists and arts organizations worried about funding – especially after MSAB eliminated nine of its 10 grant programs – what’s most important is found near the end:

“Those of us that support the state’s arts community are unanimous. We are all working to increase funding flexibility, extend deadlines, address unforeseen gaps in funding and work together to do everything we can to be supportive in this unprecedented time for the arts in Minnesota.”

Smith explained, “This is what we are hearing from the field about what artists and arts organizations need. We’re already finding there are big gaps in funding. Big disaster relief funds were created, and some had the intention of supporting arts nonprofits, but the arts nonprofits are just not benefiting.

“The conversation this week is, how do we encourage those systems to think of arts nonprofits like all other nonprofits and small businesses? Who do we need to talk to, to make sure they understand that the arts nonprofits are in horrific crisis and should be eligible for relief funds that will just help them survive?”

Good questions, and the organizations that signed “We Are United” are trying to find answers.

With every arts organization suddenly shut down, many or most with no reserves, feelings are running high. “We also needed to figure out a way to have folks gather,” Smith said. The organizations that signed “We Are United” met Monday afternoon “to talk about how we can do some online sessions, where the community at large can talk about what’s happening.”

Smith envisions a system where people will submit questions in advance, with time at the end for people who want to speak. Plans are to get the sessions going within a week or two.

Tonight (Tuesday, April 21) at 8 p.m. CST on CBS: “Let’s Go Crazy: The Grammy Salute to Prince.” Filmed shortly after the 62nd annual Grammy Awards ceremony in January, this all-star event features Sheila E, Usher, Morris Day and the Time, Alicia Keys, John Legend, Gary Clark Jr., Earth, Wind & Fire and others. After airing on CBS, it will be available to stream on CBS All Access.

Wednesday at 7:30 p.m. on the Schubert Club website: The International Artist Series Presents Avi Avital, mandolin, and Sérgio and Odair Assad, guitars. This was to have been the night that soprano Angela Gheorghiu performed at the Ordway with pianist Alexandra Dariescu. Instead, we’ll see a completely different concert from February 2018. The original recital took place during a snowstorm, so many subscribers were unable to attend. Life sometimes offers second chances at strange times, and this is one. FMI including the program and the full program notes. 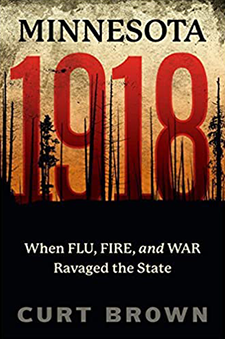 Wednesday at 8 p.m. on the Minnesota Historical Society’s Facebook page: Curt Brown on “Minnesota 1918: When Flu, Fire and War Ravaged the State.” Published in 2018, this book couldn’t be more timely. Star Tribune writer Brown looks back at the year when Minnesotans were put to the test – by the Great War, the influenza pandemic and the Cloquet-Moose Lake fires, all at once. At this virtual event, he’ll share the parallels and differences between today’s COVID-19 pandemic and the one that happened a little over 100 years ago.

Thursday at 2 p.m.: “Are You OK?: a virtual gathering” by Pollen. Need a pick-me-up? Social connection? Joy? Pollen, a media arts organization, has been hosting a series of virtual gatherings on Thursdays, each featuring a community member, stories, and art. Go here to select a date (currently April 23, April 30 or May 7) and register (click “tickets”). These events fill up. They’re free, but donations are welcome. FMI.

13 Virtual Train Rides from Around the World That You Can Experience Right Now (video). Just what it says. At least one – a journey to the Norwegian Arctic Circle – is half again as long as “Relax With Sheep” (see below).

Relax With Sheep at Shafer Vineyards in Napa Valley (video). Baah! Maah! This is kind of like those flickering fire-in-the-fireplace videos that go on and on. Except it’s sheep standing around, walking, munching on grass and lying down, with a dog keeping an eye on things. For six hours. And it all takes place in Napa Valley.