In times of tragedy, tumult and grief, it’s not uncommon for musicians, labels and music companies to issue statements and offer support. Several did after #BlackoutTuesday, a response to the death of George Floyd.

But creating and releasing an entire album in just five days might be a first. That happened with “Out of the Ashes: A Benefit Album for Minneapolis,” which came out last Friday, June 5, on the Tompkins Square label. Founded by Josh Rosenthal, Tompkins Square is a San Francisco-based indie label with multiple Grammy nominations that specializes in archival releases and musicians who play acoustic guitar. 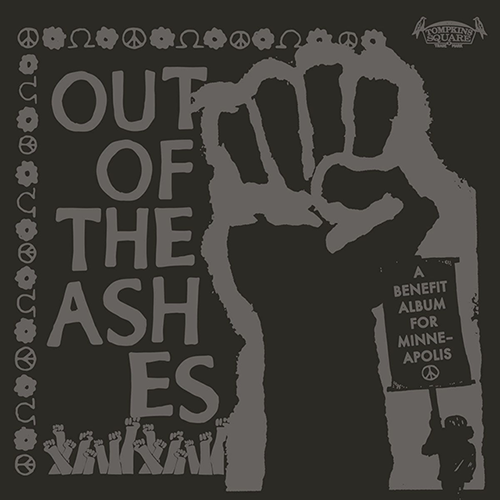 “That is the fastest I’ve ever released anything – by far!” Rosenthal said by email yesterday.

Since it debuted on the Bandcamp website, “Out of the Ashes” has been raising money for the Association for Black Economic Power (ABEP), which is partnering with the Pimento Relief Fund  to help black businesses without insurance that were damaged in the demonstrations, and Migizi, the 40-year-old organization for Native youth whose building burned to the ground.

The 16 tracks on “Out of the Ashes” are all by Minneapolis-based musicians, most acoustic guitarists. Some are new, some are previously unreleased. Except for “Our55406” by ECM artist Steve Tibbetts, all were gathered by Matt Sowell, a fingerstyle guitarist who counts John Fahey among his influences.

Sowell is a Philadelphia native who moved to Minneapolis six years ago but seems to know everyone. You might have seen him play at the Khyber Pass, the Hook and Ladder, the Turf Club, the Northeast Folk Festival, First Avenue or the Cedar, where he opened for Pokey LaFarge. Rosenthal describes him as “a centrifugal force in Minneapolis.”

Sowell is also a full-time union carpenter, a foreman and an organizer. He and his wife, Emily, are the parents of two young boys. “My oldest is 12,” Sowell said by phone on Monday evening. “His first reaction to the murder of George Floyd was to pull our Black Lives Matter sign off the front of the house, go to the corner and organize a neighborhood Black Lives Matter chant.”

Sowell grew up in southwest Philadelphia, “not too far from where the MOVE bombing happened. At the time, I was a little bit younger than my youngest, who’s 8 years old. But I felt the impact. Activism and being politically aware were kind of forced on me from an early age.”

His kids had taken part in some programs at Migizi. The loss of Migizi “really hurt. When I heard about that, it really tugged at my heartstrings. I was like, man, I wish I could do something.”

Sowell and Rosenthal met in Philadelphia about 10 years ago. Rosenthal gave Sowell a Tompkins Square compilation album, and Sowell started connecting with some of the artists. They saw each other again at the Thousand Incarnations of the Rose, a three-day music festival of American primitive guitar held in Takoma Park, Maryland, in 2018. After that, they communicated over social media.

So when Rosenthal tweeted about George Floyd on May 29, Sowell responded. The next day, Rosenthal sent Sowell a private message: “Call me.”

“I called him,” Sowell said, “and he was like, ‘I want to help Minneapolis. I want you to help me put together a group of musicians of your choice – you pick all the musicians – and you can pick charities or organizations you want to give money to, and I’ll donate 100 percent of the proceeds to these organizations.’ I thought, ‘Well, this is definitely more than I can do on my own.’ I put on my union organizer hat and thought, ‘Who do I know? Who should be on this?’ ”

11. Tim Sparks – “Downbeat on Delancey Street (Thanks to Joseph Moskowitz)”

14. Thomas Nordlund – “Through the Clearing”

On Monday, Sowell returned home from a full day of work – eight hours on the job, an hourlong drive each way – too wrung-out and exhausted to do more. “I’d been sleep-deprived for the whole weekend and the week before. My body was saying, ‘If you don’t sleep, we’re going to shut everything down.’ ”

On Tuesday, he told Emily, “Hey, this label reached out to me and they want to do a record in a quick release.” Her response: “Honey, we’re in the middle of a pandemic with an emergency going on. Can’t it wait?” Then the two of them started brainstorming about nonprofits they wanted to work with.

“Everything had to be turned in by 5 p.m. Thursday Pacific Standard Time, 7 p.m. here. It was a really short window. It was” – Sowell pauses – “Herculean.”

Except for telling artists that the album would be a compilation benefiting ABEP and Migizi (and to please send WAV files), Sowell didn’t provide any further instructions. He didn’t ask them to contribute certain kinds of songs, or songs that fit the circumstances, sent a message or communicated a mood. “You can go super-control-freak with this kind of thing, but I was working with artists. I was working with professionals. I didn’t set any parameters. I trusted them.”

Sowell chose the artists and gathered the tracks, Rosenthal did the sequencing and arranged for the album cover. “Out of the Ashes” is available now on Bandcamp. We’ve listened to it a dozen times in the past few days. It’s really good, and it’s doing good.

“One can feel powerless sometimes, but this felt like the right thing to do in the moment,” Rosenthal said yesterday. “We have raised thousands of dollars thus far and will be making initial payments to Migizi and Pimento Relief Fund shortly.”