Imagine you’re a theater with two stages, but you can’t use either one. You had a guaranteed hit planned for summer, a Sherlock Holmes mystery by an exceedingly clever, prolific and popular playwright, but that’s not going to happen. You’ve announced your 2020-21 season, which starts in October, but if there’s anything we’ve learned between mid-March and now, it’s that plans are made to be broken.

You even surveyed your own audience about their comfort levels with returning to live theater. Many people say they won’t return until there’s a vaccine and easy, widespread testing.

Meanwhile, you had success with a Zoom-created production that streamed in May. So what’s your next move?

Starting July 24, Park Square Theatre will try something else new. Following its unusual and moving “The Diary of Anne Frank,” where all the actors were in isolation and which earned raves from the Wall Street Journal, it will present an interactive online mystery in four episodes, like an old-fashioned serial.

Written by the exceedingly clever, prolific and popular playwright Jeffrey Hatcher, “Riddle Puzzle Plot” starts with a pandemic that forces a close-knit band of actors to take their annual summer scavenger hunt and their acting gigs online. When someone winds up dead, the actors and the audience must rush to find the killer before the next life is “disconnected.”

It sounds like great fun, and it features a stellar cast: Aimee K. Bryant, Alessandra Bongiardina, Pearce Bunting, Shanan Custer, Rudolfo Nieto and E.J. Subkoviak. The director is Warren C. Bowles. The Zoom technician (yes, that’s a thing) is Aaron Fiskradatz. A $30 ticket will give you access to all four episodes, all pre-recorded. You can stream them on your schedule or zoom in on Friday or Saturday nights for live introductions and post-play discussions, including hints. The Friday night series starts July 24, the Saturday night series July 25. Tickets are on sale now.

Did you see “An Art of Changes: Jasper Johns Prints, 1960-2018” at the Walker before the building closed to the public in March? Don’t worry, it’s still there. And if you’re a Walker member, you can see this exhibition as soon as Friday.

The Walker will officially open to the public on Thursday, July 16. It will open to members the weekend before, Friday through Sunday, July 10-12. Advance reservations and tickets are required, with entry during your designated 30-minute time slot. Hours are limited. New visitor guidelines will be in effect. Unless you’re younger than 2 years old, you must wear a mask. You must maintain proper social distancing (6 feet) and should wash your hands often. The museum will be closed Mondays through Wednesdays. Tickets are available now.

Dioramas, outdoor gardens and a mastodon! The Bell Museum will reopen to the general public on July 23 and, like the Walker, will be open Thursdays through Sundays. The weekend of Thursday through Sunday, July 16-19, will be members only. Advance reservations and tickets are required, with timed entry. Masks are a must. Tickets will be available starting Thursday, July 9, at 10 a.m. FMI. 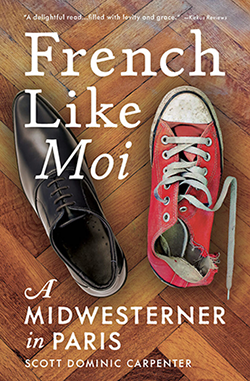 Born in Minnesota, now teaching literature and creative writing at Carleton, award-winning author Scott Dominic Carpenter has a small apartment in Paris. Try not to hate him too much as he presents his new book, “French Like Moi: A Midwesterner in Paris,” in conversation with Marcia DeSanctis, award-winning author of “100 Places in France Every Woman Should Go.” Tonight (Wednesday, July 8) at 6 p.m. on Magers and Quinn’s Facebook page.

In the past year, three local historians published three revealing books about the roles played by racism in Minnesota’s development. In “The Relentless Business of Treaties,” Marty Case explored how the U.S., territorial, and state governments and their leaders stole land from the Indigenous people who had lived there for centuries. In “Slavery’s Reach,” Chris Lehman revealed the power and influence exerted by wealthy southern slaveholders in Minnesota’s early years, and the cooperation they received from the state’s founders. In “Children of Lincoln,” Bill Green shows how the new state’s leaders moved away from abolition and racial equality in the years following the Civil War. On Thursday, July 9, at 7 p.m., all three will meet on Facebook and YouTube for a conversation moderated by Peter Rachleff of the East Side Freedom Library. What an opportunity for learning this will be. A virtual discussion will follow.

On Friday, July 10, at Crooners, Happy Apple will play a set in the club’s Lakeside Drive-In concert series. The legendary Twin Cities trio of Dave King on drums, Erik Fratzke on guitar and Mike Lewis on saxophones just released their first album in more than a decade, “New York CD.” This will be their official album release concert, and while all car drive-in spots are sold out, socially distanced tables for two and four are still available. Music at 7 p.m., doors (figuratively speaking) at 5:30. FMI and tickets ($40).

With no revenue and 4,500 hungry mouths to feed, the Minnesota Zoo in Apple Valley was in danger of closing. Last week, it received $6 million in COVID-19 relief funding from the state. It has also reopened its doors to a drive-through experience called “Beastly Boulevard.” The route takes you through parts of the Northern Trail and Family Farm to see bison, pronghorn, llamas and more. So it’s limited, but it’s not something you get to do every day, and it supports the zoo. Reserve a time slot (10 a.m. to 3 p.m. daily) and pre-purchase your tickets online. Tickets are $50 per vehicle. Limited to 500 vehicles per day. FMI.

Emily Mann’s play about Gloria Steinem’s life – titled, simply enough, “Gloria: A Life” – is available to stream at PBS. Performed by an all-female cast starring Christine Lahti as Steinem, directed by Emmy winner Diane Paulus, it’s a unique take on the feminist icon who appeared at Northrop in February.