The McKnight Distinguished Artist Award is Minnesota’s highest cultural honor. Given each year since 1998 by the Minneapolis-based McKnight Foundation, a longtime supporter of artists and the arts, it recognizes Minnesota artists who have made significant contributions to our state’s cultural life. Winners receive an unrestricted $50,000 cash prize, a once-in-a-lifetime windfall for most.

Rendon is an enrolled member of the White Earth Nation and a writer for whom the word “prolific” is an understatement. (Only three Distinguished Artists have been full-time writers.) She writes children’s books, short stories, plays, poems, lyrics, creative nonfiction and novels. She’s currently writing the third book in an award-winning series of crime novels whose protagonist is a fierce young Native woman.

Writing pays her bills, so Rendon also works freelance, writing for newspapers and magazines and taking on writing projects.

She never even imagined that she would win the McKnight. Last week, she explained how she learned the news. Note: McKnight likes to surprise its winners.

“Lori Pourier from the First People’s Fund sent me an email and asked me if I would do a Zoom meeting to talk about my writing in the coming year. I said ‘Sure,’ assuming they wanted me to do some writing for them. In my mind, I was thinking, ‘OK, if they offer me $1,000 to write something, I have to ask for $1,500 because of COVID.” She laughed. “That’s not quite sincere.

“And then, when I got on the Zoom, it was Lori and a bunch of people from the Twin Cities, and at some point somebody says, ‘Well, tell her!’ and they said I got the award, and I just started crying. I mean, I had no idea. It was so not on my radar at all. Then someone said, ‘Tell her how much the check is!’ Someone held up a piece of paper and I started crying even harder. That’s how they told me.”

Rendon’s previous awards include a 2017 Spoken Word Immersion Fellowship from the Loft, the 2018 Pinckley Prize for Debut Novel, a 2020 Ensemble/Playwright Collaboration Grant from the Network of Ensemble Theaters and the Playwrights’ Center, and a 2020 COVID-19 artist grant from the Tiwahe Foundation. This conversation has been edited and condensed.

MinnPost: Jim Denomie was last year’s McKnight Distinguished Artist. Your award makes two Native American winners in a row. Do you think Native artists are coming more into the spotlight?

Marcie Rendon: That would be the hope. There are so many amazing Native artists who have done incredible work for so many years. The image that comes to my mind is a backbone. Native creativeness is the backbone, I think, of the creative energy in the state.

MP: How are you handling the pandemic?

MR: As I’ve said online, for Indian people, this is not our first pandemic and not our first war. As an introvert, I think I could do this another six months. I like silence. I like being home. I don’t mind not being out in the hustle and bustle of the world.

I do wish that it wasn’t because of an illness. With the climate emergency, I wish that more people understood the need to slow down and consume less and not be so active and busy. It’s unfortunate that it’s taken a deadly virus to get people to stop for a minute.

MP: It’s interesting that you identify as an introvert. You do poetry readings and you’ve been a performance artist.

MR: In the early ’90s, when I won the Loft Inroads Writers of Color Award, Jim Northrup was one of my first mentors. One of the things he said back then is that I would have to learn to speak in public if I ever hoped to make any money at this.

I heard what he said, and I knew that it was a struggle for me. I’ve taken performance art classes and speech classes. I’ve forced myself to get up there and do the poetry readings. Hopefully, I’m better than I was back then.

I have a poem that starts out, “What if I never said another word? Would my silence drive you crazy?”

MP: Do you think the pandemic will make its way into your writing?

MR: I don’t know. I wrote a piece for the Tiwahe Foundation about resilience and how it isn’t always pretty. Healing isn’t pretty. We have a romanticized view of healing and resiliency. It’s because we don’t see the underpinnings, the struggle of how they got to the goodness at the end.

MP: Can you talk a bit about your path to becoming a writer?

MR: I’ve been writing ever since I learned how to write. It was fascinating to me, the stringing together of words to create a thing. In grade school, I wrote short stories. In high school, a lot of poetry, and in college, a lot of papers.

I’ve always been writing, but I didn’t know I could grow up and become a writer. I don’t have an MFA. I grew up in northern Minnesota. I had a lack of knowledge about what was possible for me, especially for me as a Native person. I had a whole career as a counselor and therapist, all the while still writing, and I would just throw it in drawers.

And then, in 1990, at the job where I was working, we all got laid off with a year’s severance. And I decided to spend the year writing. As the year was coming to an end, it was like, well, I have three kids, I better make some money doing this. And I started reaching out for paid opportunities and sending my work out for publication.

I came to writing because I had this drive to write, to create.

MP: Tell us about Cash Blackbear, the 19-year-old star of your mystery series. How did she come to life?

MR: I had been writing crime since the 1990s. I had decided that was the genre I had read the most and probably could write the best. I had written three crime novels, which currently sit in my garage because they’re not publishable material. And I had given up, thinking, “OK, I really don’t know how to write crime.” 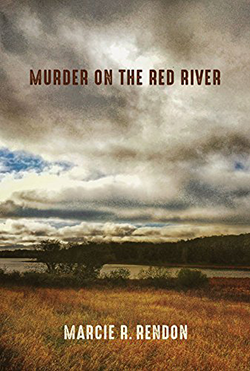 I wanted to write something that would make money. So I decided to write a fluff story. “OK, I’m going to write a novel about a young girl who writes poetry and goes to Nashville and makes it big in the country western music scene. Whatever!”

As I was writing that, it was like Cash literally appeared and said, “No, no, no, write this story.” And as I wrote the story that was coming to me about Cash, it was working. Once I finished the novel, I knew that it had potential to be published. It was Cash as a character, just appearing. I don’t know another way to say it.

MP: Who are your favorite mystery writers?

MR: I read what people call airport novels. Lee Charles, John Sanford, John Grisham, Sara Paretsky, J.A. Vance, the Harry Bosch series [by Michael Connelly]. Wallander [by Swedish writer Henning Mankell]. I love the Wallander series! It’s the only series where I read one book, then went online and I ordered every other book. And then I saw it on Netflix. There are two Netflix shows! I’ve watched all of them. What is the fascination with this guy? It’s always gray and gloomy and cold. But I love that series.

Except for his most recent work, I’ve probably read everything that Stephen King has written. And true crime: Ann Rae Rule.

MP: How do you decide what to write next?

My play, “Sweet Revenge,” that I finished in March, was selected to have a staged reading at the Oklahoma Indigenous Theatre Company. But we don’t know because of COVID if it’s going to be online or if they’ll wait until it can happen in person. I’m outlining another play, a historical fiction. And another kid’s book, but not a picture book. And then I have a stand-alone novel about a new cop that I just started.

MP: Do you have a daily routine?

MR: No, I’m pretty inconsistent. I do write some every day. And I aim for somewhere between 2,000 and 3,000 words. But I’m also working on paid writing gigs, because that’s what keeps the mortgage going. So I’m always writing something. 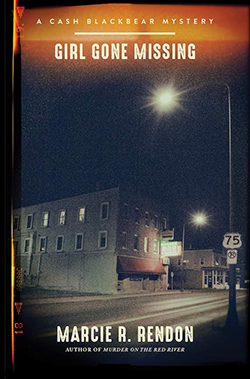 I get my best work done on novels and plays if I can get a writing retreat, a couple of weeks away from family out of the city. There I just write from the time I wake up until I fall asleep at night. These are places where I can go and be away from the constant pull on my attention and sit there with my laptop.

I have a short story in a book called “Dark Side of the Loon,” an anthology by the Sisters in Crime chapter here in the Twin Cities. It’s about a young girl who is in foster care and she kills her foster family. My kids and grandkids have read that story. And they’re like, “Grandma!” They’re horrified! But just to see their reaction to this story was worth having written it.

MP: Are you getting any nibbles for the Cash Blackbear series from TV or the movies?

MB: Cinco Puntos, my publisher, has the negotiation rights. I know that they’ve talked to some different people, but right now I don’t know where any of that is.

MB: I live my life in such a way, and I’m so excellent at budgeting, that people don’t know what a struggle it is at times. And so to have money to just cover everything without any worries … you know? This alleviates a lot of the pressure to always produce something that’s going to cover the next bill.

And I could use this time to really, truly finish a good chunk of the writing projects that I’ve started that often get put on the back burner because I have to take the next paid writing job.

And I don’t have an agent. If I could devote a month’s worth of time to finding an agent, that would also free me up to do more of the creative work that I have started. I wouldn’t have to be doing all the business stuff all the time.

MP: So you’ve been approaching publishers on your own?

MR: I didn’t know there was another way. With “Murder on the Red River,” the first Cash Blackbear, I just sent out the manuscripts to agents and publishers and got rejected for five years. Rejection after rejection after rejection. I was ready to quit again. My next big idea was to write a romance novel, and I don’t even read romance! But they sell.

My friend Debbie Reese, who does the American Indians in Children’s Literature blog, suggested I try Cinco Puntos. I sent them an email and said, “I have this novel, would you be interested?” They said to send the manuscript, so I did, and they sent me a contract.

MR: I would want other Native people and women to know that it’s possible. You just have to keep going after what you want and doing the things that move your heart. For moms in particular, I hear so many women say, “Well, I want to write, but I have the kids and I have this job.” Follow your heart. Be curious and don’t be afraid to try things.