Depending on which list you read, the bestselling Christmas album of all time is either “Elvis’ Christmas Album” or Kenny G’s “Miracles: The Holiday Album.” In 2019, Rolling Stone made a list of the 25 Greatest Christmas Albums of All Time (worth a look) that put “A Christmas Gift for You from Phil Spector” at #1 (well, it is pretty great). “Christmas With Weezer” is #25. What? At #21, Bob Dylan’s ultimately endearing “Christmas in the Heart.”

Our Christmas music collection leans toward jazz (you can’t beat Vince Guaraldi’s “A Charlie Brown Christmas”) but we always listen to local guitarist Tim Sparks’ “Nutcracker Suite,” a virtuoso solo performance for which he won the National Fingerstyle Guitar Championship in 1993.

We’ve just heard “The New Standards Holiday Show Album,” released last Friday. A consolation for the fact that there won’t be an in-person New Standards Holiday Show this year – after 13 consecutive years – its 40 minutes are filled with the band’s signature deconstructed holiday tunes. Ten of the 11 tracks were recorded earlier this year at Creation Studio in Minneapolis. Only one, “Silent Night” featuring Aby Wolf, is a live version from a holiday show.

If you ever make a Christmas album, call Aby Wolf.

There’s a joyous and swinging Big Band-style “God Rest Ye Merry Gentlemen.” A tuneful original by Jeremy Messersmith, “Everything is Magical.” (Not his “Let’s Ditch Christmas.” It’s probably not the year for that.) Chris Koza’s dreamy take on “Walking on Air” from the animated classic “The Snowman.” A tango-fied “Do You Hear What I Hear?” “The Christmas Waltz,” written by Sammy Cahn for Frank Sinatra, featuring Nellie McKay. A Beatles-flavored “Snow Days,” written by Matt Wilson. 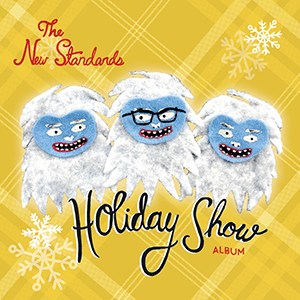 The closing track is a New Standards original, with upbeat music and up-to-the-minute lyrics: “So raise your glass and drink a toast/To the wish we wish the most/We’ll be together here/At Christmastime next year.”

The New Standards are Chan Poling on piano and vocals, John Munson on bass and vocals, and Steve Roehm on vibraphone. In a statement, Poling said, “Making an album in a time of pandemic is a near impossible task. … We are just so damn proud of this record! It really feels like a capstone recording, a great way to stick a cherry on top of 15 years of working on these songs – and getting them out there in a year when we all need them the most.”

“The New Standards Holiday Show Album,” a foolproof stocking stuffer, is available on Bandcamp now. You can sample it there. On Dec. 30, the trio will perform its Preener’s (Pre-New Year’s Eve) show on the Dakota’s stage in a livestream starting at 7 p.m. FMI and tickets ($15).

V Tonight (Thursday, Dec. 10) at 7 p.m.: TPT: Moving Lives Presents “Art Is … The Elements From the Earth.” Four Minnesota poets will read poems about fire, water, air and earth and their relation to political voice and the power of language. Ray Gonzalez is the award-winning author of 16 books of poetry. Su Hwang won the inaugural Jerome Hill Fellowship in Literature. Roy Guzmán’s debut collection was published this year by Graywolf Press. Michael Torres’ first collection won the National Poetry Series and will be published by Beacon Press. Free or optional $5 donation, with RSVP required.

V Tonight (Thursday, Dec. 10) at 9 p.m. and Saturday, Dec. 12, at 8 p.m.: Illusion Theater: “Miss Richfield’s Guide to a Socially Diseased Holiday.” What would the holidays be without the outrageous Miss Richfield 1981? Drab? Meaningless? Although we can’t experience her magnificence in person this year, we can enjoy one or more of her filmed performances, which will be streamed online. We’ve been told that each show has a different live component. FMI and tickets ($20 general admission, $100 VIP, which includes a post-show Zoom gathering with Miss R.). Also Friday, Dec. 18, and Sunday, Dec. 20.

V Friday, Dec. 11, 3 p.m.: Minnesota Jewish Theatre Company: Live reading of “The Chanukkah Guest.” Based on the award-winning book by Eric Kimmel, Jenna Zark’s play was commissioned by MJTC and became a holiday hit. Hear the tale of Bubba Brayna, who makes latkes for a bear, read by Kim Kivens, Joshua Bagley and Craig Johnson. Free, with reservations required. Call 651-647-4315.

V Friday, Dec. 11, 8 p.m.: Jazz Central Studios: Graydon Peterson Quartet. After closing down in March, Jazz Central Studios jumped into livestreaming in June with a three-day StreamFest. November saw a regular schedule of livestreams on Fridays and Saturdays. Will it continue? In part, that’s probably up to us, and whether we support the streams (and the artists) by showing up and contributing what we can to Jazz Central’s Musicians Relief Fund. The excellent Graydon Peterson Quartet will be followed Saturday, Dec. 12, by Javier Trejo; Friday, Dec. 18, by the Dave King Trio; and Saturday, Dec. 19, by Acoustic Death Wish (Brandon Wozniak, Anthony Cox, Dave King). FMI. Livestreams are here.

V Friday, Dec. 11, 8 p.m.: Border CrosSing: “El Mesías.” This Spanish-English mash-up of Handel’s “Messiah” and Argentine composer Ariel Ramírez’s “Navid Nuestra” has become an annual tradition for the choir led by Mexican conductor Ahmed Anzaldúa. Because COVID, this year’s production will be a hybrid of live performances, a virtual collaboration with the Minnesota Orchestra, and recordings from past years’ performances with the Minnesota Chorale. Free on Border CrosSing’s YouTube channel.

V Available Friday through Sunday, Dec. 11-13: The Singers: “What Sweeter Music.” Forgive us for neglecting to mention last weekend’s availability, but you still have this weekend to catch a wonderful compilation of previous year’s performances by this stellar chamber choir led by Matthew Culloton. Selections include Benjamin Britten’s “Ceremony of Carols,” “Three Nativity Carols” by Stephen Paulus, “Joseph” by composer-in-residence Timothy Takach and “O magnum mysterium” by Morten Lauridsen. FMI and tickets. Watch anytime between 9 a.m. Friday and 9 p.m. Sunday.