The clock is ticking on our weekly check-ins with Sheila Smith. The executive director of Minnesota Citizens for the Arts (MCA), the arts advocacy organization, and chair of Creative Minnesota, which researches the arts and provides hard data on the importance of the arts to our economy and quality of life, announced last week that she will retire at the end of February.

Smith was the first person we spoke with after COVID closed the doors to our arts and culture sector. Ever since, she’s been our Michael Osterholm.

The big arts story of the moment: Two COVID relief bills, one federal and one state, were signed into law in December. The federal bill provides $15 billion for the arts, the state bill nearly $115 million. Both are welcome news to music venues, theaters, museums and other cultural institutions that were the first to close and will likely be the last to reopen, if they haven’t closed permanently by then.

“It’s extraordinary that both the state and federal governments have acknowledged the importance of the arts and culture community to our economy by specifically naming them in the COVID relief efforts,” Smith said by phone on Monday. “This is a result of direct advocacy by the field, but also an acknowledgment that the nonprofit arts have suffered much bigger damages from COVID closures than has really been acknowledged anywhere.”

What will this support mean to arts organizations in Minnesota? “On a very basic level, some organizations will survive that may not have otherwise.”

What should arts organizations be doing right now? “The state support is going to be accessed through counties. The first thing is to identify your own county commissioner’s district, which you can do at the secretary of state’s Pollfinder. Find out who your county commissioner is. Contact your commissioner and remind them that grants for arts nonprofits were specifically called out in the state funding bill and ask them about the process for applying.”

(Note: Let’s just say that contacting your commissioner is not exactly intuitive. At Pollfinder, you’ll enter your address. A few clicks in, you’ll see a green box titled “Districts for this address.” Look for your county commissioner district. For example, if you live in Uptown in Hennepin County, your county commissioner district is 03. Do a google search for Hennepin County Commissioner District 3. Marion Green will pop up. She has her own website. Not all commissioners do, and each county presents results in its own way. Each county will also have its own process for applying for arts relief.)

On the national front, pandemic emergency unemployment compensation has been extended to April 5. “All recipients of unemployment, including qualified self-employed gig workers, will receive an extra $300 a week in unemployment benefits for 11 weeks,” Smith said. “Most artists are gig workers. Folks who have been dramatically affected by unemployment should be aggressive about studying and getting online to see what they’re eligible for, to make sure they get it.

“Then there’s another round coming of the PPP [Paycheck Protection Program]. People should watch for that. Priority will be given this time to first-time applicants, minority businesses, businesses with 10 or fewer employees and those located in low- and moderate-income neighborhoods. If you don’t apply, you don’t get. The deadline to apply is March 31. Guidelines will be released in early January.”

Key takeaways: More financial help is on the way for artists and arts organizations. And if you don’t apply, you won’t get.

V Now on demand on the PBS website and PBS Video app: “American Masters: Laura Ingalls Wilder: Prairie to Page.” Did you know that the fierce Black feminist writer Roxane Gay is a Laura Ingalls Wilder fan? We didn’t until we saw this new documentary, a collaboration among TPT and WNET. It’s a deep dive into Wilder’s personal history, her controversial depictions of Blacks and American Indians, and the role her daughter Rose played in transforming Wilder’s life story into enduring American children’s literature. With Gay, Tess Harper, Amy Brenneman, Louise Erdrich, Melissa Gilbert and Wilder biographers including Caroline Fraser and Pamela Smith Hill. 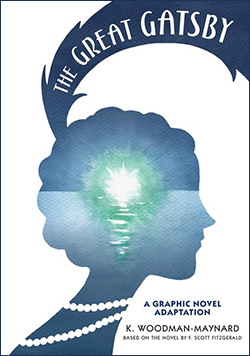 V Tonight (Tuesday, Jan. 5), 6 p.m.: Red Balloon Bookshop: “The Great Gatsby: A Graphic Novel Adaptation” book launch. At 12 a.m. on New Year’s Day, the copyright on “The Great Gatsby” expired and the novel entered the public domain. Adapted and illustrated by Minnesota native K. Woodman-Maynard, published by Candlewick, this is the first graphic novel version of F. Scott Fitzgerald’s Jazz Age tale. At the launch, Woodman-Maynard will talk about what it’s like to adapt a classic into a graphic novel, the choices she made to modernize it and her drawing process. Free, with registration required. P.S. A second “Great Gatsby” graphic novel by Fred Fordham and Aya Morton is due out from Scribner in July. We’re not making this up.

V Available to stream starting Wednesday, Jan. 6: Jungle Theater: JuCoby Johnson: “I’ll Be Seeing You Again.” Third in a series of audio dramas dubbed “Jungle Serial,” Johnson’s original work takes us back in time to May 2020, when two old friends reconnect by day in a city that has become the epicenter of a nation’s racial reckoning. With Ryan Colbert, H. Adam Harris and Rajané Katurah, sound design by C. Andrew Mayer. Your $20 ticket also gives you access to the first two Jungle Serial productions, Eric Micha Holmes’ “Mondo Tragic” and Vie Boheme’s “Centerplay.” If you bought a ticket to either of those, you can use it for “I’ll Be Seeing You Again.”

V Thursday, Jan. 28: American Swedish Institute: Marcus Samuelsson. Audiences are limited for these events, so you might want to sign up now. Samuelsson, the celebrity Ethiopian Swedish chef and restaurateur who once had a restaurant in Minneapolis (Aquavit, 1999-2003), has a new book out, “The Rise: Black Cooks and the Soul of American Food.” Samuelsson has a relationship with ASI. He has launched previous books here, and while those have been in-person visits and this will be virtual, he’ll likely sell out. At 6 p.m., he’ll join the team at Cooks of Crocus Hill in a cook-along live from his kitchen. At 7 p.m., he’ll give a book talk with former Star Tribune Taste editor Lee Dean. Cook-along ($195) includes ingredients for two meals, a copy of the book, and access to the book talk. Book talk is available as talk only ($10-15) or talk with book ($55-60). FMI and registration.