The concert began in a blaze of brass: two trumpets, a horn, trombone and tuba, five Minnesota Orchestra musicians playing James M. Stephenson’s “Fanfare for an Angel.” It’s a rouser, and for those of us – make that all of us – stuck at home on New Year’s Eve, thinking, perhaps bitterly, about past New Year’s Eve gatherings, parties, concerts, hundreds of champagne flutes raised in Orchestra Hall’s spacious lobby, and the countdown to midnight, it was an invitation: For the next hour or so, forget about the bad stuff. Listen to the music.

The seats in the hall were empty, but thanks to head electrician and lighting designer Michael Murnane’s washes of color, the hall glowed. Sarah Hicks, festive in a golden sash (and later a silver party hat), greeted her invisible audience with, “We’ve all endured so much this incredibly challenging year, but we’ve endured it together, and tonight our spirits are high and our hearts are full of hope.”

The brass quintet, which also played Bach and a Norse folk song, was followed by a woodwind ensemble and Mozart’s Serenade No. 11 in E-flat major. Then came the strings, led by Music Director Osmo Vänskä, with Jessie Montgomery’s fiery “Starburst,” three lilting selections from Ulysses Kay’s Six Dances for String Orchestra, and Dvorák’s lush “Nocturne,” which ended with a stately dance, softly plucked notes on Tony Ross’ cello and a cushion of silence (during which, in a crowded hall, you would have held your breath). After the Dvorák, the final selection on the program, the playful “Pizzicato Polka” by Strauss brothers Johann Jr. and Josef, was like a child thumbing her nose at the world.

But wait – it wasn’t over. Arthur Luck’s arrangement of “Auld Lang Syne” ended the concert on a traditional note, a reminder that 2020 would soon be over, done with, out the door, in the rearview mirror, goodbye and good riddance.

At 80 minutes, the evening wasn’t entirely music. While the stage was being reset for different distanced configurations, we learned what musicians carried in their instrument cases (useful items and lucky charms), heard a conversation between Hicks and Minnesota Orchestra President and CEO Michelle Miller Burns, and listened to personal messages from musicians and Vänskä. We saw the orchestra give a warm, foot-stomping farewell to violist Thomas Turner, a member since 1994, who has now retired.

If you missed the livestream on New Year’s Eve, you can watch the recording on demand. The next livestream is set for Friday, Jan. 15. All of the orchestra’s livestreams are free.

What happened to the 2020 Sally Awards?

An annual tradition for 27 years, the Sally Awards are special. Named for Sally Ordway Irvine, whose passion and donations built the Ordway Center for the Performing Arts, they honor Minnesotans whose commitment to the arts and arts education have made us better as a people and a state.

The film is available on demand on the Ordway’s YouTube channel. Here’s a list of all past Sally winners. See how the number of categories (and winners) has grown from three to five.

Now available at the Walker’s Virtual Cinema: Ephraim Asili’s “The Inheritance.” In Asili’s first feature, a semi-autobiographical docudrama, a young man inherits his grandmother’s house in Philadelphia. While sorting through her vast collection of books and materials from the Black Arts Movement, he starts a Black liberationist Marxist collective. The New York-based filmmaker has said that his film is “deeply influenced by Jean-Luc Godard’s ‘La Chinoise’ (1967).” FMI and tickets ($10/8). Ends Jan. 11. 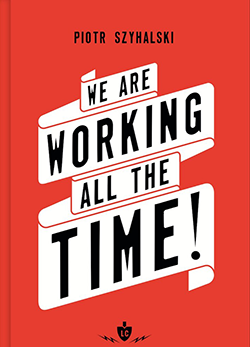 Tonight (Wednesday, Jan. 6), 7 p.m.: Weisman Art Museum: Virtual Studio Visit: Piotr Szyhalski and Russ White. Born in Poland, based in Minnesota, MCAD professor Piotr Syzhalski made news in 2020 with his black-and-white ink drawings in response to COVID. Every day for 224 days, starting March 24 and ending Nov. 3, he posted a new one to his Instagram page. Outspoken and uncompromising, they are modern-day propaganda posters. All 224 will be published sometime this year in a new book. Meanwhile, the Weisman Art Museum has just released a midcareer survey in essays and images of Szyhalski’s work. Edited by WAM senior curator Diane Mullin, it was created to accompany an exhibition that was scheduled for 2020 but bumped by COVID into fall 2022. WAM’s book, “Piotr Szyhalski: We Are Working All the Time!” will be the focus of tonight’s virtual studio visit and conversation, led by MPLSART.com editor Russ White.

Thursday, Jan. 7, 7 p.m.: Milkweed Editions: torrin a. greathouse, “Wound From the Mouth of a Wound” Virtual Book Launch. This fearless and lyrical collection, written by a trans and disabled woman, ends with a sonnet meant to be read in a mirror. It won the 2020 Ballard Spahr Prize for Poetry, a generous Midwestern-specific award that brings $10,000 and publication by Milkweed. The poet will be joined by Aimee Nezhukumatathil, the contest judge and author of “World of Wonders.” Free, with registration required.