It’s the start of the Derek Chauvin trial. It’s a year into the pandemic. It’s two days after the Senate passed a $1.9 trillion COVID relief bill after contentious debate and without a single Republican vote.

A collaboration among the Native American Community Development Institute (NACDI), All My Relations Arts, Hennepin County Library, Dream of Wild Health, Milkweed and Birchbark Books, Seed Week sounds like a refuge, a virtual place of sanity.

An award-winning Dakota writer, Wilson is a Mdewakanton descendant, enrolled on the Rosebud Reservation. Her previous books include “Spirit Car: Journey to a Dakota Past” and “Beloved Child: A Dakota Way of Life.” A 2013 Bush Fellow, she has been the executive director for Dream of Wild Health and the Native American Food Sovereignty Alliance (NAFSA).

One of the year’s most anticipated books, “The Seed Keeper” spans several generations of a Dakota family’s struggle to preserve their way of life and protect what matters most. Reviewers are calling it “moving and monumental.” Signed copies are available at Birchbark Books. 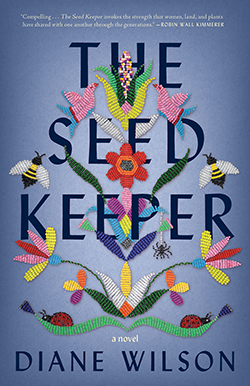 Seed Week began last night with an evening of traditional seed storytelling. Tonight (Tuesday, March 9) is the official book launch. It will include a reading by Wilson, brief readings by Teresa Peterson and Gabrielle Tateyuskanskan and a video poem by Missy Whiteman. 7 p.m. Free with registration. Tomorrow (Wednesday, March 10), Dream of Wild Health’s seed keeper, Jessika Greendeer, will lead a lesson on planting corn, beans and squash. 7 p.m. Free with registration.

On Thursday (March 11), youth leaders from Dream of Wild Health will make Sunflower Cookies using the recipe from Sean Sherman and Beth Dooley’s “The Sioux Chef’s Indigenous Kitchen” cookbook. 7 p.m. Free with registration. Friday (March 12) will get you started on your own seed keeping with help from members of NAFSA, Indigenous Food Network (IFN), Dream of Wild Health, Four Sisters (a project of NACDI) and Hennepin County Community Seed Libraries. Musician Keith Secola will give a preview performance of his Seed Opera. 2 p.m. Free with registration.

More? All My Relations is featuring “Seed Stories: Art by Holly Young and Xavier Tavera” through March 27. While supplies last, pick up free resource information and starter seed packets. On Thursday, April 1, the Institute of Advanced Study at the University of Minnesota will present “Telling True Stories: The Seed Keeper,” featuring Wilson and moderated by artist and educator Christine Baeumler. 3:30 p.m. Free. FMI and registration.

V Tonight (Tuesday, March 9), 7 p.m.: Star Tribune and MPR: Talking Volumes, Talking Race with Reginald Dwayne Betts. The first in a series of four conversations on the topic of race in America. MPR News journalist Kerri Miller will speak with Betts about his new book, “Felon Poems.” (Betts spent eight years in prison before getting out, going to Yale Law School and writing several books.) A panel discussion afterward will feature Brother Shane M. Price and the Strib’s Rohan Preston. FMI and tickets (pay-what-you-want, $0-20). Note: Tickets are available until 10 a.m. the morning of the webinar, meaning this morning, a detail we missed earlier. V Wednesday, March 10, 5:30 p.m.: Rain Taxi: Michelle Nijhuis. Rain Taxi has been hosting a winning series of virtual events, most recently with John Jennings and David Brame (fascinating), André Gregory and Christina Baldwin (enchanting) and bassist Victor L. Wooten and the Current’s Sean McPherson (uplifting and inspiring). Next up: science writer Michelle Nijhuis, author of “Beloved Beasts: Fighting for Life in an Age of Extinction,” in conversation with Jenny Price. Free. FMI and registration. V Wednesday, March 10, 6:30 p.m.: Club Book: John Moe: “The Hilarious World of Depression.” Moe’s podcast by the same name was a casualty of last summer’s American Public Media/Minnesota Public Radio cutbacks. Carver County Library will host Moe as he discusses his book – everything he knows about depression from personal experience, extensive research and years of interviews. 6:30 p.m. Free. FMI and link to event on Facebook. If you can’t catch it Wednesday, a podcast will be available soon after.

V Wednesday, March 10, 7 p.m.: Frank Theatre: Frankly Speaking: Are you ready to return to the theatre? Just short of a year ago, Frank Theatre staged its final performance of Danai Gurira’s “The Convert” at the Gremlin. It was so good, so involving and transporting. Now that people are being vaccinated against COVID, we can start looking ahead to the return of live theater … but when? When will we feel comfortable walking through a door and into a room full of strangers? With Rachel Austin, Willie Johnson and Florence Brammer, moderated by Wendy Knox. 7 p.m. Free on Facebook. Stick around and take part in a Q&A after.

V Thursday, March 11, 7:30 p.m.: Schubert Club: Accordo. The esteemed chamber ensemble hasn’t performed since last October. This will be the first of three virtual concerts comprising its 12th season. (Sadly, the annual Accordo with Silent Film event, with Stephen Prutsman, has been canceled.) Thursday’s program will include violin duos by Bartók and Berio, Haydn’s Quartet “The Rider,” Paul Wiancko’s “American Haiku for Viola and Cello” and Mozart’s Quintet in D Major. With Stephen Copes and Erin Keefe (violin), Rebecca Albers and Hyobi Sim (viola) and Anthony Ross (cello). Free on the Schubert Club’s website, Youtube page and Facebook page. This is the premiere; the concert will remain available online through April 11.