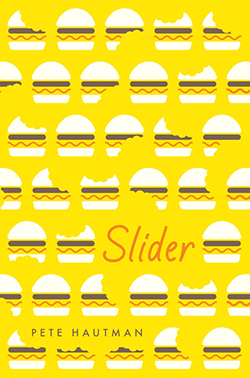 Between now and April 21 is plenty of time to read Minnesota/Wisconsin author Pete Hautman’s book “Slider.” Written for ages 10-14, it straddles the line between middle-grade fiction (8-12) and young adult (YA) fiction (12-18). So it’s not a hard read. And yes, it’s OK for adults to read books written for kids. A good story is a good story.

Set in the world of competitive eating (there is such a thing), “Slider” is about an eighth-grade boy named David Alan Miller who accidentally charges $2,000 on his mom’s credit card and has to literally eat his way out of trouble by winning a pizza-eating contest. David is also the person mainly in charge of watching his 10-year-old brother, Mal, who has autism. Reviewers have called the book “laugh-out-loud funny and genuinely sweet,” “relatable,” “rewarding,” “wholly enjoyable” and “too delicious to put down.”

Between now and April 21, you can read “Slider” for free. On that day, Hautman, who won the National Book Award for an earlier YA book, “Godless,” has won two Minnesota Book Awards and who also writes poker-themed crime novels for adults, will be featured in a statewide virtual discussion. That event will be open to the public, with registration required.

Where can you read “Slider” for free? Online at Ebooks Minnesota. You can also check it out from your local library or buy a copy at your favorite independent bookstore. Through your local library, you can access author videos, reading guides, and virtual book club discussions. Go here FMI and a video hello from Hautman.

“Slider” is the fourth title in the Friends of the St. Paul Public Library’s One Book/One Minnesota, a statewide book club that began last April (remember last April?) with Kate DiCamillo’s “Because of Winn-Dixie.” This was followed by “A Good Time for the Truth: Race in Minnesota” in July and Louise Erdrich’s “The Plague of Doves” in October.

Presented in partnership with the Minnesota Department of Education, One Book/One Minnesota aims to bring Minnesotans together and highlight the role of libraries as community connectors.

The Friends of the St. Paul Public Library is the Library of Congress-designated Center for the Book in Minnesota.

Ragamala will dance to a new home in Kingfield

After 23 years on Lake Street, Ragamala Dance Company will move its rehearsal and office space to the Center for Performing Arts (CFPA) at 38th and Pleasant in Minneapolis’ Kingfield neighborhood.

Illusion Theater made a similar announcement in December after more than 40 years in the Hennepin Center for the Arts, now part of the Cowles Center.

Founded and owned by Jackie Hayes, who also serves as CFPA’s executive director, the center has been at its current location, a former convent for Incarnation Catholic Church, for 26 years. So it’s not exactly new. What’s new is the 20,000-square-foot addition now under construction, due to be completed this spring. After announcing the expansion in spring 2019, CFPA went ahead despite the pandemic, breaking ground in August 2020. Because of the pandemic, some features in the original plans have been updated. The new building will have windows that can be opened and a state-of-the-art air filtration system.

In a statement, Ranee and Aparna Ramaswamy, Ragamala’s artistic directors, called this “a pivotal moment and a unique opportunity for our organization. … Access to shared theater spaces, gathering spaces, and a community of like-minded artists will be instrumental in realizing our future plans and projects.”

Hayes said, “We are thrilled to renew our partnership with the celebrated Ragamala Dance Company in our new space. Our organizations shared space many years ago, and we have long hoped we could reunite.”

Ragamala will move into its new space this summer.

V Streaming on demand today (Wednesday, March 24) through April 1: MSP Film: 12th Minnesota Cuban Film Festival. Last year’s Cuban Film Festival was interrupted by COVID. Some of the films carried over to this year’s festival, including “Queens of the Revolution” (being LGBTQ+ in Cuba) and “Dance Cuba: Dreams of Flight” (two dance companies – one Cuban, one American – come together in Havana; score by Chucho Valdes). Four of the six films include live discussions via Zoom. FMI and tickets ($10/$8 MSP Film members).

V Livestreaming Thursday, March 25, 7 p.m.: Twin Cities Jazz Festival: Jazz Fest Live: Kevin Washington and RA Spirit. Washington, jazz drummer extraordinaire, will be joined by Pete Whitman on sax, Jeff Bailey on bass and Kavyesh Kaviraj on piano for a set streamed live from the Dakota’s stage. Free with registration. P.S. Did you know you can go back in time at the Jazz Fest Live website and catch past concerts you missed?

V Streaming Friday, March 26, 7 p.m.: Walker Art Center and Graywolf Press: Danez Smith and the Dark Noise Collective. The self-described “Black, Queer, Poz writer & performer from St. Paul” will premiere new work inspired by their latest book of poems, “Homie,” published by Graywolf. Also on the program: performance and poetry videos from the Dark Noise Collective (Fatimah Asghar, Franny Choi, Nate Marshall, Aaron Samuels, Jamila Woods). A live Q&A will follow. If you can’t make the premiere, you can stream the program (but not the Q&A) through Monday. FMI and tickets (pay-as-you-wish, $5-30).

V Livestreaming Tuesday, March 30, 7 p.m.: Star Tribune and MPR: Talking Volumes, Talking Race with Naima Coster. The series of four discussions centered on race concludes with Brooklyn native Coster, author of “Halsey Street” and a finalist for the 2018 Kirkus Prize for fiction. Her latest is “What’s Mine and Yours.” She’ll be in conversation with Kerri Miller. FMI and tickets (pay-what-you-want, $0-20). Tickets are available until 10 a.m. on the morning of the webinar.