Arts & Culture
Artscape
April 14, 2021
If you’re a Minnesota Opera fan, you know Mark Campbell’s name. The extravagantly talented and prolific Pulitzer- and Grammy-winning librettist and lyricist has written 40 operas, so far. Five were commissioned by MN Opera and premiered here: “Silent Night” with composer Kevin Puts, winner of the Pulitzer Prize in Music; “The Manchurian Candidate” with Puts; “The Shining” with Paul Moravec; “Memory Boy” with Reinaldo Moya; and “Dinner at Eight” with William Bolcom.

A sixth MN Opera commission, “Edward Tulane” with Paola Prestini, based on the book by Minnesota author Kate DiCamillo, was set to premiere at the Ordway on Saturday, March 21, 2020. Fundraising was under way for a recording project that would have led to a CD and a national television broadcast. COVID canceled everything.

A glimpse at the “Upcoming” page on Campbell’s website shows you the rest of his year. Like most artists, his commitments and appearances (and two more world premieres) were erased. He used part of that time to launch the Campbell Opera Librettist Prize (COLP), the first annual award in opera history specifically for librettists. He wrote new songs and worked on new operas.

Tonight we can hear some of what Campbell has been up to when the New York Festival of Song’s Next series presents “Mark Campbell: New Works.” It’s the first time NYFOS will devote a whole program to the work of one lyricist. The eight songs will all be from different works, written with different composers. They will include selections from operas that were postponed during the pandemic and works Campbell has written during the past year. Most won’t have been heard before.

Tune in to hear “Nellie’s Aria” from “Edward Tulane.” A song from “A Nation of Others,” a new oratorio written with Paul Moravec; the oratorio Campbell and Moravec wrote before this, “Sanctuary Road,” earned a Grammy nomination. A song from “The Secret River,” a new opera written with Stella Sung, adapted from Marjorie Kinnan Rawlings’ book about an African American family in Central Florida during the Great Depression.

A song from “A Sweet Silence in Cremona,” written with Roberto Scarcella Perino, about an Italian town that went silent while its famous Stradivarius violin was recorded. A song from “Unruly Sun,” written by Matthew Ricketts, from a new song cycle inspired by filmmaker Derek Jarman’s memoir, “Modern Nature.” The premiere of a new quartet arrangement of the finale from “Stonewall,” written with Iain Bell.

The singers are Jessica Fishenfeld, Olivia Cosio, Joshua Blue and Brian James Myer. Between songs, NYFOS artistic director Steven Blier and music director Danny Zelibor will talk with Campbell about the songs. A live Q&A session with Campbell, Fishenfeld, Myer and Zelibor, hosted by Blier, will follow immediately after the concert.

The concert premieres at 6 p.m. CST and will be available to view through May 15. Free with registration; donations are welcome. 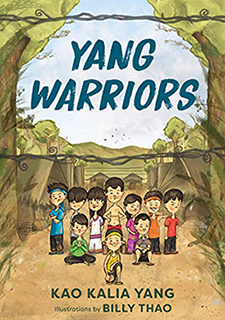 V Friday, April 16, 7 p.m.: East Side Freedom Library: Kao Kalia Yang and Billy Thao “Yang Warriors” virtual book event. In her latest book, just out from the University of Minnesota Press, award-winning author Kao Kalia Yang takes us to the Ban Vinai refugee camp in northern Thailand, where she lived as a child. Enemies were everywhere: guards with guns, other refugee children looking for play space, lonely ghosts waiting on the other side of the fence. In Yang’s words and the cultural imagery of debut illustrator Billy Thao, “Yang Warriors” tells the story of fierce and determined children in an unforgiving place. Both Yang and Thao will host. Free with registration, or watch on Facebook.