Last year at this time, we talked with Minnesota potter Matt Krousey about the 28th Annual St. Croix Valley Pottery Tour. This Minnesota Mother’s Day weekend tradition that draws thousands of people to seven potters’ studios for three days of shopping and socializing. For the first time in its history, the tour was going virtual, the only choice available in a deadly pandemic.

No one thought this year would be a repeat. By now, the potters are pros at marketing themselves and their work online. For some, that has been a big change. As Krousey said last year, “I want to be a Luddite, but it’s not an option anymore.”

Potters work with clay and fire, glazes and paints. It’s a hands-on occupation. Melissa Weiss digs her own clay. Until very recently, Dan Finnegan worked in a studio without electricity. Many potters live in small towns, in woods or the countryside. Krousey gets some of his inspiration from the flora and fauna who share his land in Harris. One of the pleasures of taking the actual tour is driving through the scenic St. Croix Valley, with its curving roads and tiny towns.

The tour is a national model for educating people about pottery, and for bringing serious collectors, casual buyers, the curious and makers together in a relaxed and casual setting. Each potter on the tour hosts several guests, who travel with their pots, in non-pandemic times, from towns in Minnesota and Wisconsin, and also from Illinois, Iowa, New York, North Carolina, Virginia, Oregon, California, and other states, and sometimes England, Norway, Australia and New Zealand. This year’s tour features 58 guest potters. None will travel here, but all will offer their latest creations in their online shops.

The tour starts at 10 a.m. Friday (May 7) and continues through Sunday (May 9). You can learn more about the potters here. Click on STUDIOS in the menu up top. A directory of all the potters’ online shops is here and will stay up after the sale.

Sometime in April, Krousey gathered his guest potters for a group Zoom, during which they talked about their work, their lives, the challenges of the past year and the tour. Three of Krousey’s guests couldn’t be there, but a new guest was, Kyle Lee from Brooklyn, New York. (OK, so not all potters live in small towns.) You can watch the Zoom here. It will give you a taste of what it’s like to meet the potters face-to-face. Barring some other unforeseen apocalyptic incident, we’ll be doing that again next year.

L and V Plan now for the 40th Minneapolis St. Paul International Film Festival. MSPIFF doesn’t start until next week, but there are a few things you might want to jump on. The festival will be virtual for the second year in a row – it’s simply too soon to start packing people into the St. Anthony Main lobby and theaters – but a few events will be held outdoors and in person. Like the opening night screening of Questlove’s film “Summer of Soul” on Thursday, May 13, at Como Lakeside Pavilion and the screening of “Hollywood Fringe” on Saturday, May 15, which will open with a live set by John Munson & Friends (including Dylan Hicks and Lucy Michelle, who performed some of the music in the film). On Saturday, May 22, “After Antarctica,” about polar explorer (and Minnesotan) Will Steger, will screen at the Bohemian Flats pop-up drive in, with Steger in attendance. Click the links FMI and tickets. All three films will also be available to stream.

V Tonight (Wednesday, May 5), 7 p.m.: SubText Books: “Rocked by the Waters” reading with Margaret Hasse and Athena Kildegaard. Hasse and Kildegaard are two of the poets featured in a book of 136 poems by mothers, published by Nodin Press. Others include Heid E. Erdrich, Deborah Keenan, and Connie Wanek. Free with registration.

V Thursday, May 6, 12 noon: Schubert Club: Virtual Courtroom Concert: Artaria String Quartet. Schubert Club closes out a year of virtual courtroom concerts with the Minneapolis-based, internationally known Artaria quartet. Their program will include Schubert’s Quartet No. 15 in G major and Carlos Simon’s “An Elegy: A Cry from the Grave” (2015), which Simon describes as “an artistic reflection dedicated to those who have been murdered wrongfully by an oppressive power,” namely Trayvon Martin, Eric Garner and Michael Brown. Free. Watch on the Schubert Club website, YouTube channel or Facebook page. 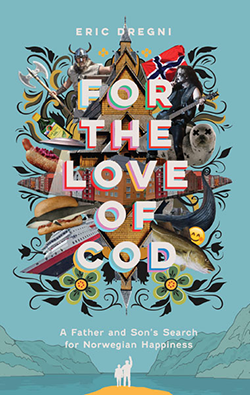 V Thursday, May 6, 7 p.m.: Moon Palace Books: In Conversation With Eric Dregni & Sasha Aslanian. The virtual launch for Minnesota author Dregni’s latest book, “For the Love of Cod: A Father and Son’s Search for Norwegian Happiness.” Norway has been called the happiest country on Earth. Is it really? If so, why? Dregni decided to explore those questions with his 15-year-old son, who was born in Norway, where the cost of living is astronomical and there’s no sun for months every year. (Asking for a friend: If your grandparents on your father’s side came from Norway, can you move there?) Sasha Aslanian is a public radio reporter and producer who grew up across the street from Dregni and shares his affection for Norway. Free with registration.

V Thursday, May 6, 7:30 p.m.: Friends of the Hennepin County Library: Pen Pals: Susan Choi. Once planned as an in-person event, now virtual. Choi’s several books include “American Woman,” a Pulitzer prize nominee, and “Trust Exercise,” which won the 2019 National Book Award for Fiction. FMI and tickets ($45; use code SPRINGSALE to get $10 off). Proceeds benefit the library.

V Sunday (May 9), 3 p.m. and 7 p.m.: Dakota: Patty Peterson and the Jazz Women All-Stars. Looking for something special to do with Mom on Mother’s Day? Treat her to jazz singer Patty Peterson and a stellar line-up of friends including Linda Peterson on vocals, Mary Louise Knutson on piano, Joan Griffith on bass, Sue Orefield on sax and Sheila Earley on drums. Live from the Dakota’s stage at 3 p.m., rebroadcast at 7 p.m. FMI and tickets ($15).