Nothing lasts forever. Life is impermanent. These are the main messages of Day Schildkret’s art, which is not at all sad or depressing. It’s awesome and inspiring. And it might be just what we need after 16 months of a global pandemic that’s not over yet.

Where better to see it than a cemetery?

In July 2019 at Lakewood Cemetery on the eastern shore of Bde Maka Ska, Schildkret, an earth artist, author and educator, led an event called Midsummer Memory Mandalas. Working on the grass near Lakewood’s Memorial Chapel (our own miniature, mosaics-lined Hagia Sophia), he created a large, intricate and colorful mandala from materials foraged from the cemetery’s 250 acres: stones, leaves, seeds, flowers, feathers, bark, twigs. While transforming grief into beauty, the mandala represented the transitory nature of life itself.

This weekend, as part of Lakewood’s 150th anniversary year,  Schildkret will return for a second visit. On Friday (July 16), he’ll create another large mandala, approximately 10′ x 20′, from materials found on the grounds. Come and watch anytime from 4-7 p.m. (or earlier, if you want to see the beginnings). It’s free. Limited seating will be available, so bring a blanket. Talk to the artist while he works. Ask him questions. Schildkret’s mandalas were a response to his own experience with grief and loss. They made him feel better and helped him get through a difficult time.

On Saturday (July 17), Schildkret will teach two workshops on what he calls Morning Altars. You might think of these as small, everyday mandalas. Schildkret has devised a seven-step practice for creating these works of natural, personal, ephemeral art. There’s nothing mysterious or arcane about it. It’s mostly about slowing down. Saturday’s workshops are ticketed, and both are sold out. But he’s written a book about morning altars that will be available at Lakewood from 4-8 p.m. on Friday, with a book signing at 7:30.

We’ve been thinking about how Schildkret’s visit will be different this time, given what has happened between 2019 and now. In a special kind of cosmic cruelty, COVID interrupted our social, cultural and faith-based rituals and traditions around death and grieving. People who lost family members and loved ones during the worst times might find Schildkret’s work especially comforting.

V Tonight (Wednesday, July 14), 6:30 p.m.: Weisman Art Museum: Online Panel Conversation: “What Do You Hear?” During COVID, cellist Rebecca Merblum had a series of virtual “Conversations for Duet with Cello” with Rebecca Krinke, an artist and landscape architect, Lesley Kadish, a museum professional, and her cello. They explored questions like “What happens when the audience is invited into the performance itself?” and “What happens if, instead of playing for the audience, Merblum had a direct, one-on-one conversation with a member of the public? What would we hear?” Moderated by poet Mwatabu Okantah, this event will be part performance, part interactive experiment, and part panel discussion, asking attendees – which could include you – to engage with the panel and ask “What do we hear”? Free with registration.

V Now through Friday, July 23: PBS Short Film Festival 2021: “A Decade of Being Seen.” Stop scrolling aimlessly through your usual streaming platforms. Watch 25 juried independent films on culture, family, society, identity, humanity and race. Now in its 10th year, the PBS Short Film Festival is two weeks of storytelling by filmmakers from all over the U.S. The best short films burn their way into your brain; the not-so-great ones are 5 or 10 minutes out of your life, not exactly “Iron Man 2.” The festival is available on Facebook, YouTube, the PBS website and the PBS Video App. Here’s the trailer.

L Friday and Saturday, July 16 and 17, 8 p.m. at Orchestra Hall: Minnesota Orchestra: Summer Opening with Jon Kimura Parker. This concert won’t be livestreamed by TPT. (Though Friday’s will be broadcast live by Classical MPR.) Seating is still physically distanced and spread out. If you have wanted to dip your toe back into live, in-person performances, this would be a great place to start. The program will include Berlioz’s “Le Corsaire” Overture, Richard Strauss’ “Death and Transfiguration” and Florence Price’s Piano Concerto performed by pianist Jon Kimura Parker, the orchestra’s new Creative Partner for Summer at Orchestra Hall. This will be Parker’s first time playing the Price concerto and the Orchestra’s first time presenting it. Dima Slobodeniouk was scheduled to conduct, but due to COVID-related visa and travel restrictions, Osmo Vänskä will take his place. FMI and tickets ($24-62).

L Friday through Sunday, July 16-18, 9 p.m. on the Target Stage at Harriet Island: Vox Medusa: “Eurydice.” In this reimagining of the Greek myth, Eurydice is more than the daughter of Persephone, the wife of Orpheus, kidnapped by Hades and (almost!) rescued (if only Orpheus hadn’t turned around!). Vox Medusa tells the story from Eurydice’s point of view, with a cast of 20 performers, spoken word artist Desdamona as the Oracle, and a fire performance by Infiammati Fire Circus, with contemporary dance choreographed by Kristin Freya. This is a full-on production with original electronic music, a vocal score, video environments and lighting design. FMI and tickets ($10-20). Doors at 8:30. Allow time to check in. Bring a blanket or camp chair; there’s plenty of room for distanced seating on the flat ground and hillside. 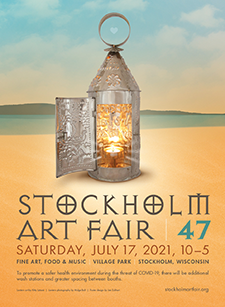 L Saturday, July 17, in the village park in Stockholm, Wisconsin, 10 a.m.-5 p.m.: Stockholm Art Fair. Uptown canceled. Edina canceled. Powderhorn will be virtual. If you want a live and in-person art fair, with more than 90 new and returning artists in all media (pottery, metal sculpture, jewelry, painting, printmaking, photography, fiber, wood, glass), plus live music and local food vendors, head for Stockholm. A very small town on the shores of Lake Pepin, it’s worth the drive.

Beauty at Lakewood in response to grief and loss; ‘Eurydice’ (with fire) at Harriet Island