For “Roadrunner,” Morgan Neville’s riveting new documentary about the life of Anthony Bourdain that opens Friday in theaters, you don’t need to worry about spoilers. You already know how it ends. On June 8, 2018, the chef, bestselling author, world traveler and TV star died by suicide in his hotel room in a village in France. He was there with his friend, the French chef Éric Ripert, filming an episode of “Parts Unknown,” his Emmy-winning CNN series. Bourdain was 61.

Ever since, people have wondered why he killed himself. He was famous and successful. He literally had the world at his feet. He had a wife (they were separated) and a young daughter he adored. He was admired and loved. Many who knew him and worked with him for years, friends and longtime members of his crew, cried on camera when they talked about his death for this film.

Countless others who read his books and followed him around the world through his TV series were deeply shocked by the news. He was part of our lives. If you jumped on the Bourdain train early – if you read “Kitchen Confidential” when it first came out, then followed him from “A Cook’s Tour” (2002-03) through “Parts Unknown” (2013-18), you spent 18 years in his virtual company. You witnessed his evolution from arrogant, smart-mouthed, chain-smoking know-it-all to a man who was profoundly changed by travel. He seemed to grow empathy and compassion before our eyes. He would eat anything he was offered, not because he was reckless or greedy, but because he recognized the sacrifice people made to share their limited food with him, and he would not embarrass them by refusing their hospitality.

If you read him, watched him and showed up at his speaking gigs, you should see this film. He’s so present in it, so close and immediate, that for a little under two hours you almost forget he’s gone.

Neville, whose other films include the wonderful “20 Feet From Stardom” (which launched Lisa Fischer’s solo career) and “Won’t You Be My Neighbor,” doesn’t start “Roadrunner” at the beginning of Bourdain’s life. It’s almost as if the first 43 years didn’t happen. Even Bourdain thought that things were winding down for him, that “I had already had my adventures.” He was executive chef at New York’s esteemed Brasserie Les Halles; wasn’t that as high as he could expect to go? But when “Kitchen Confidential” became a bestseller, he started living a brand-new, nonstop life, eventually spending more than 250 days a year on the road.

“One minute I was standing next to a deep fryer,” he says. “The next, I was watching the sun set on the Sahara.” And “It happened overnight. It fell in my lap.” And “I burned down my previous life in its entirety.” In 2005, the first year of “No Reservations,” he and his first wife, Nancy Putkoski, were divorced. They had been married for 20 years. We don’t hear much about that.

Another fascinating Bourdain fact we learn from the film is that he barely traveled at all before signing on for “A Cook’s Tour.” Everything he knew about travel came from books and movies. On his first big trip, to Japan, he didn’t know how to act. But his appetite for new experiences was so voracious, his curiosity so boundless, his intelligence so vast that he made it work. And his personality was so outsized that other TV chefs and travel show hosts seemed two-dimensional by comparison.

Once Bourdain started doing television, someone was always filming him, which gave Neville a lot of footage to work with. Neville also did the usual work of the documentarian, rounding up talking heads to share their memories and insights. Ripert was Bourdain’s true friend; so was chef David Chang. Bourdain’s second wife, Ottavia Busia-Bourdain, an Italian mixed martial arts fighter and mother of their child, regrets not keeping a closer eye on him after they separated. We learn from his longtime producers, Lydia Tenaglia and Chris Collins, that Bourdain was shy, that he could be “a total pain in the ass,” that to Bourdain, “the greatest sin [was] mediocrity.”

The artist David Choe might have understood him best. Like Bourdain, who overcame a heroin addiction but not his addictive tendencies (he often drank alcohol on his shows), Choe was an addict. According to Choe, Bourdain’s addiction “jumped.” He said, “I don’t think there was anything that would have lasted forever in his world. No person or place, thing or interest.”

“Roadrunner” doesn’t answer the why of Bourdain’s suicide – he was a writer who didn’t leave a note – but hints that it had something to do with his relationship with Asia Argento, his last girlfriend. That’s not fair. Except for existing footage, Argento doesn’t appear. She isn’t interviewed. Nobody asks her what was going on in their lives. We learn that she accused Harvey Weinstein of sexually assaulting her, that she became a leader in the #MeToo movement and Bourdain joined her with all of his fierce energy, to the point of dropping old friends if they didn’t agree with him.

Did tabloid photos of Argento with another man really push Bourdain over the edge? What about other aspects of his life that might have led to his final act – the constant seeking but never finding, the exhaustion, the desire to live a so-called “normal” life without the capacity to do so, the feeling of being unlovable?

In what might be the film’s weirdest scene, Bourdain sits down with Iggy Pop at a restaurant. Over glasses of wine, Bourdain asks Pop, “What thrills you?” Pop replies, “Being loved and actually appreciating the people that are giving that to me.” Or maybe Pop is right, and if Bourdain had known how many people loved him, he might still be here, making plans, deciding what countries to visit next. 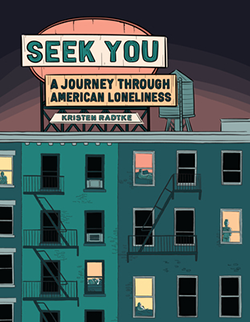 V Tonight (Thursday, July 15), 7 p.m.: Magers & Quinn: Kristen Radtke presents “Seek You: A Journey Through American Loneliness.” Radtke’s first graphic memoir, “Imagine Wanting Only This,” an exploration of loss, love and grief, was acclaimed for its writing and its drawing. Radtke is back with “Seek You,” a history of isolation and longing. In what M&Q is calling “a lonely hearts reading,” she’ll be joined by Zaina Arafat (“You Exist Too Much”) and Rachel Yoder (“Nightbitch,” forthcoming). Free with registration.

V Tonight (Thursday, July 15), 8 p.m.: Friends of the Minnesota Orchestra: Dessa and Jade of the Current: “A Conversation on Bridging (Musical) Worlds.” Singer/rapper/writer Dessa and the mighty Minnesota Orchestra have a history. They’ve performed several sold-out shows together and released a live concert recording, “Sound the Bells,” in 2019. If you’re a fan of either or both, tune in tonight for a conversation likely to touch on old vs. new music, generational differences between audiences, and code switching, among other topics. This event is part of the Friends’ “Meet a Musician/ACCENT series.” Ticket sales benefit the Friends’ music education programs. FMI and tickets (pay-what-you-can). L Thursday, July 15, 7 p.m. at Como Lakeside Pavilion and Friday, July 16, 7:30 p.m. at Lake Harriet Bandshell: Minnesota Sinfonia. Making his solo debut with the Sinfonia, led by Artistic Director Jay Fishman, award-winning Russian-American violinist Yevgeny Kutik will perform Mendelssohn’s Violin Concerto in D minor. Born in Minsk, Kutik immigrated to the United States with his family at age 5. He made his major orchestral debut in 2003 at age 18 with Keith Lockhart and the Boston Pops; in 2019, he made his Kennedy Center and Ravinia Festival debuts. The New York Times has praised his “dark-hued tone and razor-sharp technique,” “old-fashioned rhapsodic style [and] rich, sweet tone.” This should be a lovely way to spend a summer evening. Free. L and V Friday and Saturday, July 16 and 17, 8 p.m.: Jazz Central Studios: Return to Live at JCS. After a year of livestreams only, Jazz Central will return this weekend to live and in person performances for limited-capacity vaccinated audiences. On Friday, pianist Jack Barrett, whose influences have included Chick Corea, Keith Jarrett, Brad Mehldau and Tigran Hamasyan, will perform with his quartet including Jake Baldwin on trumpet, Charlie Bruber on bass and Ben Erlich on drums. Tickets here ($10). Saturday will feature the excellent Doug Haining Quintet, led by the always swinging sax and clarinet player. Tickets here ($10). If you really want to see either or both in person, it’s safest to get tickets. Meanwhile, the livestreams will also continue on the Jazz Central website. L Friday through Sunday, July 16 through 18 at Caponi Art Park Amphitheater: Theatre 55: “Hair: The Concert Experience.” Let the sun shine in! Hear the Vietnam War-era rock musical about truth, peace and love, performed by people who lived it. Everyone in the cast is 55+. Richard Hitchler is director and producer, Victor Zupanc is music director and keyboard player in the four-piece band. This will be a concert in a bucolic setting with ample space for social distancing, dancing (if you feel like it) and singing along, if you choose; all ticket holders will be given lyric sheets. Bring your own chair or blanket, drinks and snacks. Also July 23 through 25. 7 p.m. Fridays and Saturdays, 3 p.m. Sundays. FMI and tickets ($8 individuals, $20 carpool, $50 vanpool).

L Saturday and Sunday, July 17 and 18, 10 a.m. to 6 p.m. in Loring Park: 49th Annual Twin Cities Pride Festival. The annual celebration of the LGBTQ+ community returns after a long COVID year plus a month (Pride usually takes place in June). There won’t be a parade, Saturday night concert or fireworks, but there will be music stages, local BIPOC and LGBTQ+ vendors, food courts, a beer garden and free COVID vaccines, most with incentives for getting them, including gift cards. Booths will be spaced out more and everyone is encouraged to follow COVID cautions and courtesies. FMI. Free.