Arts & Culture
Artscape
Sept. 22, 2021
The Bach Society of Minnesota (BSM), the oldest Bach society in the United States, responded to the pandemic with three virtual events and two series of free outdoor Mobile Mini-Concerts, during which musicians gave hundreds of solo performances throughout the state. BSM called 2020-21 their Vagabond Season. Meanwhile, the Minnesota Bach Ensemble (MBE) released selections from their audio archives and presented virtual concerts in February, May and June of this year.

Both organizations — BSM led by artistic director Matthias Maute, MBE by Mischa Santora — survived. Both have announced their return to live performance for 2021-22. And you don’t even have to choose between them. Miraculously, all of their concerts are on different dates. Wisely, all will be available virtually for those who can’t or would rather not attend in person. Buy a ticket, get access.

Celebrating their 90th year, BSM will offer a Festival Season of four programs.

Oct. 29 at Sundin Music Hall and Saturday, Oct. 30, at Mount Olive Lutheran Church in Rochester: “Morning Has Broken.” A musical journey from dawn to dusk, with works by Bach, Schmelzer, Abel, Dieupart, Telemann and Maute. With Maute on recorder, Margaret Humphrey on violin, Rebecca Humphrey on cello and Paul Boehnke on harpsichord.

Dec. 3 at the Basilica of St. Mary: Bach’s Christmas Oratorio, cantatas I, III, V and VI, a collaboration with the VocalEssence Ensemble Singers led by Philip Brunelle, with Evangelist Nicholas Chalmers.

April 29, 2022, through May 3 at the Ordway, Westminster Hall, Trinity Lutheran Church in Stillwater, Unitarian Universalist Church of Minnetonka and Colonial Church of Edina: “Legends & Lies: The Story of Till Eulenspiegel,” a collaboration with Cantus. Rescheduled from April 2021, this musical tale of a prankster who crosses Europe during the 30 Years’ War will also tour to Duluth and Bemidji in Feb. 2022, with dates TBD.

Saturday, May 14, at Saint Thomas More Catholic Church in St. Paul: “At the Summit: B Minor Mass.” Bach’s crowning achievement, a “cathedral in sound.”

BSM will also present their inaugural Minnesota Bach Festival. Both “Legends and Lies” and “At the Summit” will be part of it, along with performances by Lyra Baroque Orchestra, Flying Forms, and solo BSM musicians in more Mobile Mini-Concerts TBA.

MBE will return to Antonello Hall, its home at MacPhail’s Minneapolis HQ, with three programs.

April 3 and 4: “The Art of Transformation.” Music by Bach and Mozart, and an Art of Fugue “Paraphrase” by Bach and Santora. With soprano Linh Kauffman, Tami Morse on harpsichord and Michael Cain on piano and electronics.

Three Graywolf Press titles have been longlisted for the 2021 National Book Awards. In the Translated Literary category: Nona Fernández’ “The Twilight Zone,” translated from the Spanish by Natasha Wimmer. In the Poetry category: “The Wild Fox of Yemen” by Threa Almontaser. And in the Fiction category: “Abundance” by Jakob Guanzon. This is the second time Fernández has been longlisted; the first was for “Space Invaders” in 2019. Both “The Wild Fox of Yemen” and “Abundance” are debut titles.

Graywolf author and MacArthur fellow Claudia Rankine is coming to Friends of the Hennepin County Library’s “Talk of the Stacks” on Wednesday, Oct. 13, at 7 p.m. She won’t be here in person; this will be a virtual event to discuss her latest book, “Just Us: An American Conversation” (2020). Her talk will include a live Q&A with webinar participants. Rankine is always worth hearing and you might want to register sooner rather than later so you don’t forget. It’s free. (And we’ll probably remind you again.)

Mark your calendar now for this year’s Twin Cities Book Festival, presented by Rain Taxi, which will be offered in a hybrid version: part live and in person at the Minnesota State Fairgrounds on Saturday, Oct. 16, part virtual over Crowdcast, already underway.

The Mary Ann Key Book Club, a collaboration among Hennepin County Library and Star Tribune columnist Myron Medcalf (and named after his great-great-great-grandmother), continues with Cathy Park Hong’s “Minor Feelings: An Asian American Reckoning.” Listen in on a conversation between Medcalf and the author on Tuesday, Oct. 12, at 7 p.m. Free with registration. The Mary Ann Key has been called the “anti-racism book club.” If you’re looking for things to read and people to talk with about race, give it a try.

V is for virtual, L is for live and in person. Always check with the venue about its COVID protocols.

L Thursday, Sept. 23, 7 p.m. at the Walker Cinema: E.G. Bailey’s “KEON” and Marcus Kar’s “Strange Things.” After more than a year, the Walker Cinema will reopen for in-person screenings. First up: two new films by local filmmakers about Black life in Minneapolis. The artists and collaborators will be in attendance. Both films contain scenes of police violence. Free tickets are available at the main lobby desk starting at 6 p.m. 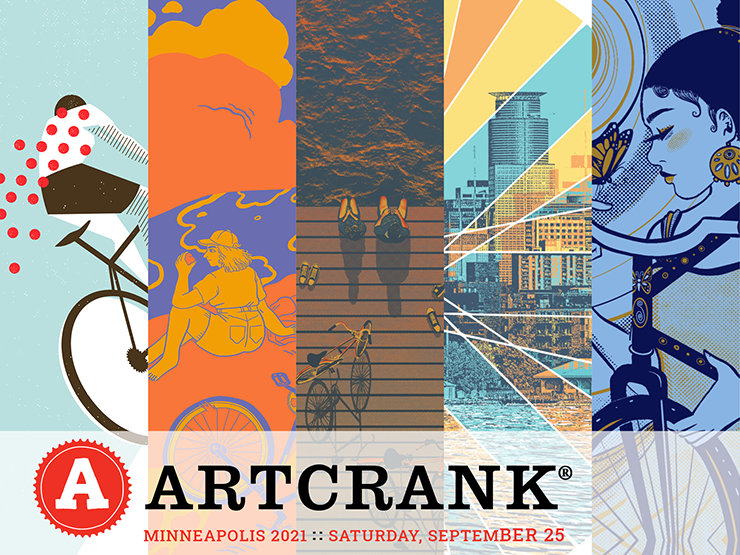 L Saturday, Sept. 25, 1 p.m.-7 p.m. at Fulton Brewing: ARTCRANK Minneapolis. Remember the colorful annual show of bike-inspired poster art? Or, more accurately, the day of bikes, posters and beer? ARTCRANK hasn’t been here since 2018. It was scheduled to return last year but, you know. This will be the first time the Minneapolis show will include posters by artists and illustrators from across the United States and overseas — 14 states and 4 countries in all. Admission is free. Original limited edition prints by more than 50 artists will be available to buy, all at $45, including new designs by Adam Turman, Anne Ulku, Courtney Thomas, Meher Khan and Ross Bruggink. A selection of Fulton beers and seltzers will be sold for $6 per glass. Part of the proceeds from beer sales will benefit Northeast Minneapolis Arts Association (NEMAA). There will be food trucks, and bike racks, but bring your own lock. Masks will be required for everyone inside the brewery. We’re silly-happy to see ARTCRANK in our picks again. FMI. P.S. Find sneak peeks of posters on the Facebook page.

Bach is back and ARTCRANK returns