If you’re looking to have an All Hollow’s Eve type of experience this weekend, you might consider two outdoor shows taking place — one on the Greenway, put on by Barebones Puppets, and the other at the rooftop space on top of the Bakken Museum, in the latest offering by Open Eye Theatre. If Halloween isn’t your thing, you’ve got lots of other options, too. This week, Pillsbury House Theatre launches the first of many events centered around Sharon Bridgforth’s “bull-jean” books, the latest of which is about to be released. Also this week, Aby Wolf and Eric Mayson perform as a duo in a show headlined by Dylan Hicks’ Small Screens group. Plus, Dreamsong blurs boundaries, and the gang from Drag Story Hour — fresh from their resounding success at the St. Paul Libraries despite protests from hate groups — heads to the Central Library in downtown Minneapolis with a giant storybook set.

For Steve Ackerman Fans: “From the Bowels of Heck” and “ADVENTURAMA: The Musical for Kids”

The sense of play that happens when Steve Ackerman unleashes his goofy creative ingeniousness is truly a source of wonder and delight. In “The Bowels of Heck” Ackerman teams up with longtime collaborators Maren Ward, Jon Mac Cole and a group of other creative spirits for an outdoor show at the Bakken Museum rooftop. It’s Open Eye Theatre’s third annual production at the space. A gothic heavy metal band provides accompaniment for the work— a tongue-in-cheek send-up of an otherworldly band. It takes place Thursday Oct. 27 through Sunday, Oct. 30 at 7:30 p.m. ($20). More information here.

If you want a double Ackerman weekend, you can also head to Minneapolis’ Central Library for the latest offering by Drag Story Hour with Old Man Zimmer, Doña Pepa and Sid Sity. The group has been targeted by hate groups at its recent performances in St. Paul, and now bring their joyful literary kids’ show to Minneapolis. “ADVENTURAMA: The Musical for Kids” features a pop-up book and puppets created by Ackerman along with Maggie Arbeiter and Fletcher Wolfe. The work also features original music by Dan Dukich and the team. (Saturday, Oct. 29 at 11 a.m. and 2 p.m. at the Central Library (free). More information here.

In 1998, author, poet and theater practitioner Sharon Bridgforth released her character of “bull-jean” into the world, when she published “bull-jean stories” through RedBone Press. Set in the rural South during the 1920s to the 1940s, the book weaves experimental poetry with storytelling as it shares the life of Bridgforth’s “woman-loving” Black protagonist.

Bridgforth has a new book launching this fall, bringing her bull-jean character back as an ancestral presence. It’s called “the bull-jean stories and dem/dey back.” The new book takes place 22 years after the events in the first, and is filled with dreams, Black mermaids, and ritual. Pillsbury House Theatre will host a launch party on Saturday, Oct. 29 at 1 p.m. (free). Also this weekend, PHT opens “The bull-jean Experience,” a hybrid film and performance work that infuses jazz, rhythm, and poetry together as it investigates Bridgforth’s bull-jean world. Collaborating on the project is scholar/artist Omi Oshun Joni L. Jones, and filmmaker Za’Nia Coleman. It runs Thursday through Sunday, Oct. 27 to 30 at 7 p.m. (pick your price) at PHT. Both events are just the beginning of bull-jean programming scheduled this season. From Jan. 12 to Feb. 5, PHT will present an adaptation of “the bull-jean stories,” starring Aimee K. Bryant. Then in June, the theater presents “bull-jean/we wake,” directed by Daniel Alexander Jones.

Since 1994, Barebones Puppets has created a sense of ritual with its Halloween Extravaganza performances. For many years, the annual event took place at Hidden Falls, where stilt walkers, fire dancers, and puppeteers converged in a spectacle of imagination, whimsy, political commentary and mourning. Since 2020, the organization has tried out alternate formats, in response to the pandemic as well as the national reckoning on race in the wake of George Floyd’s murder. That first year, co-facilitators Lelis Brito and Harry Waters Jr. organized a series of “offerings” on Lake Street, that mixed performance and visual art to reflect on our times. Last year, Barebones partnered with Latinx organizations for a Day of the Dead celebration on Lake Street. Now, BareBones is back with its first full-fledged production since 2019, this time taking place on the Midtown Greenway. Tickets are sold out, but you can purchase walk-up tickets before the show— they recommend getting there between 5:45 p.m. and 6 p.m., and then you’ll enter at 6:30 p.m. The show runs Friday Oct. 28 through Monday, Oct. 31, starting at 7 p.m. at the Greenway and 11th Avenue ($20, no one turned away for lack of funds). More information here.

Dreamsong gallery borrows a phrase from the novels of Elena Ferrante for its latest exhibition. The concept of “Smarginatura” appears numerous times in the books, first in Ferrante’s “My Brilliant Friend.” The character of Lila experiences losing her outlines, and bursting through the boundaries that surround her. “On December 31st of 1958 Lila had her first episode of dissolving margins,” Ferrante writes (as translated by Anne Goldstein.)  “… she had had the impression that something absolutely material, which had been present around her and around everyone and everything forever, but imperceptible, was breaking down the outlines of persons and things and revealing itself.”

In the “Dissolving Margins” exhibition, sculptor Julia Haft-Candell and painter Maria Kozak use their various mediums to create amorphous forms. Kozak’s paintings began as digital sketches, and appear ghostlike even as they employ striking use of color. Haft-Candell, meanwhile, creates new vocabularies of shape through intuition and symbols. The opening takes place Saturday, Oct. 29 from 5-7 p.m. at Dreamsong (free). More information here. 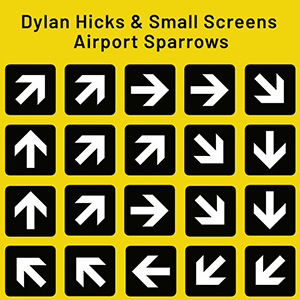 Dylan Hicks and his new band Small Screens hits the Cedar Cultural Center this week as they release their new album, “Airport Sparrows.” Hicks’ turns of phrase elevate these catchy tunes that are at once self-deprecating and vulnerable. Small Screens shares Aby Wolf and Eric Mayson, who will be expanding their duo sound for the first time, accompanied by bassist Ted Olsen and Joey Van Phillips. Saturday, Oct. 29 at 7 p.m. at the Cedar Cultural Center ($15 advance, $20 day of the show). More information here.