Part two of an eight-part series

Audra Otto loves reading books, talking to writers, visiting book clubs, digging up photos, and hanging around the Minnesota Historical Society. Holder of literary degrees from the University of St. Thomas and the National University of Ireland, she’s been a major player helping MinnPost get the Book Club Club off the ground. This series, called Letters from Audra, talks about the role that book clubs have played in the lives of Minnesotans from 1880 to today. 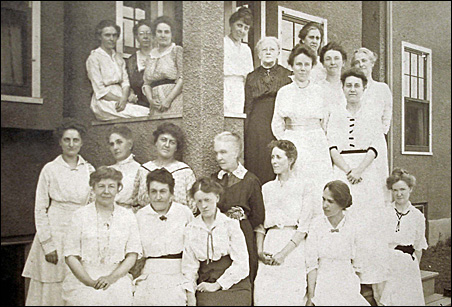 Courtesy of the Minnesota Historical Society
The Froula Reading Circle, 1915.

According to Jane Cunningham Croly, author of “The History of the Woman’s Club Movement in America,” the St. Cloud Reading Room Society, founded in 1880 and incorporated in 1882, is the oldest women’s club in Minnesota. In the archives at the Minnesota Historical Society, records can be found for a half a dozen more literary clubs established in the late 19th and early 20th century, some of which still exist today. The Froula Reading Circle of St. Anthony Park in St. Paul, founded by Eva Froula in 1909 for “enlightenment and intellectual stimulation,” has continued for over a century. These early literary groups differed drastically from today’s book clubs, primarily in the formality of their structure and procedure and in the vigorousness of their study.

Historic literary clubs signaled the seriousness of their endeavor with meticulous attention to regulations and rules of order. Reading circles established a leadership structure, appointing officers to serve as president, vice president, treasurer and secretary. Although a few clubs had a single individual serve as president or secretary for decades, most often, leadership rotated each year in order to give all members exposure to growth in confidence and skills. In addition to electing officers, these clubs generally formed a program committee, membership committee, and a social or events committee to oversee these aspects of club life. Each committee consisted of a leader and two or three other members.

First published in 1891, and endorsed by the General Federation of Women’s Clubs in 1893, Harriette R. Shattuck’s “The Woman’s Manual of Parliamentary Law” was widely adopted by reading circles as the official guide to club organization and rules of parliamentary procedure. Most literary clubs had a Constitution and bylaws in place after only a few meetings. A Constitution declared a club’s official title and purpose; bylaws established membership limits, member induction and expulsion, dues, election procedures, meeting protocol, obligations and discipline, rules regarding visitors, penalties or fines, and amendment procedures. Parliamentary procedure distinguished literary societies from more informal women’s social groups. By adopting the procedures governing the meetings and operations of voting male citizens and legislative bodies, small groups of women who met in each other’s homes were able to assert their legitimacy in the public sphere.

The desire for recognition as legitimate public organizations also motivated local clubwomen to federate at the state and national levels. In 1890, the national General Federation of Women’s Clubs was formed as an association of literary and cultural clubs. Over time, the General Federation of Women’s Clubs incorporated a wide variety of women’s clubs that differed in mission but held in common the assumption that women had an important role to play in society. Although it refused to allow African-American clubs to join, and supported educational reforms that had racist effects, the GFWC became an important agent of Progressive Era reform.

While the majority of literary circles were all-female, groups of mixed gender were not unheard of.  The Lyndale Reading Circle of Minneapolis, for example, which was established in 1895, was composed primarily of married couples, and official club positions were shared equally among men and women.