Part six of an eight-part series

Audra Otto loves reading books, talking to writers, visiting book clubs, digging up photos, and hanging around the Minnesota Historical Society. Holder of literary degrees from the University of St. Thomas and the National University of Ireland, she’s been a major player helping MinnPost get the Book Club Club off the ground. In Letters from Audra she talks about the role that book clubs have played in the lives of Minnesotans from 1880 to today. 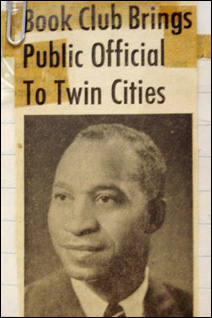 A final glaring disparity between modern book clubs and historic reading circles is modern clubs’ lack of an integral connection to social reform. Few book clubs express a social mandate in any way resembling those of 19th-century literary groups.

The St. Cloud Reading Room Society, whose stated objectives were to establish a free reading room and to promote intellectual growth, started the first library association in St. Cloud in 1886. The society also voted $300 to support the library, a contribution that was given annually. The Fulda Reading Club continuously performed community service projects and assisted in civic improvement. The club started the Fulda Public library and worked for its maintenance and improvement throughout the years. Similarly, the Stillwater Woman’s Club founded the Stillwater Public Library in 1922. Over the years, the club raised funds for a variety of causes, including the donation of books to libraries, the “Save the Courthouse” fund, and even the restoration of Independence Hall in Philadelphia.

The Twin City Book Club, an African-American women’s literary club established in 1954, was heavily involved in social service work. In 1955, the club invited Chicago editor Vincent T. Tubbs, of Jet magazine, and others to speak on the subject of the Negro Press. The following year, the Twin Cities Book Club organized a public meeting to hear a panel of housing experts discuss housing segregation in Minneapolis and St. Paul. In 1957, the club organized a forum on the civil-rights movement and the events in Little Rock. Members worked to bring in Everett Frederic Morrow, a former NAACP civil-rights lawyer then working under President Dwight D. Eisenhower, to deliver a speech, along with Daisy Bates, president of the NAACP in Little Rock at the time and editor of Little Rock’s African-American newspaper. Over the years, the Twin City Book Club held several donation drives for underprivileged African-American children in Selma, Ala., including a clothing drive in 1964 and a book drive in 1965, in which the club sent 3,000 books to a Selma school.

Today, book clubs generally have no concomitant collective social mission, such service initiatives having been delegated to separate organizations. Many women in book clubs are involved in other socially relevant activities in their communities, but rarely do they tie in with their reading groups.