Part three of an eight-part series

Audra Otto loves reading books, talking to writers, visiting book clubs, digging up photos, and hanging around the Minnesota Historical Society. Holder of literary degrees from the University of St. Thomas and the National University of Ireland, she’s been a major player helping MinnPost get the Book Club Club off the ground. In Letters from Audra she talks about the role that book clubs have played in the lives of Minnesotans from 1880 to today. 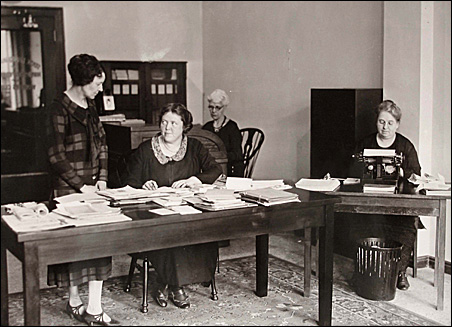 Reading clubs of former times differed from today’s book clubs not only in the formality of their structure, but in the formality of their assembly proceedings. Clubs set annual programs of study focusing on a particular subject or following a general theme. Outlines were generated, assigning all members topics on which to write research papers throughout the course of a year. A presentation format dominated over discussion format, each monthly meeting consisting of a lecture presentation to the club by one or more members on a particular topic of study.

Even mid-20th-century clubs adhered to the presentation format. In an interview with Philip Krestedemas, Barbara Cyrus, president of the African-American women’s Twin City Book Club (founded in 1954), affirmed, “It was absolutely essential that you have a book report.” After reports and readings, programs usually featured less-formal discussions on related topics.

Some clubs also scheduled periodic debates on topical issues, in which several speakers would present on the affirmative and negative side of the topic in question. The Inglenook Reading Club of St. Paul held a debate on “Child Labor and Constitution,” and the Lyndale Reading Circle debated “The Annexation of the Philippines — a Mistake?” and “The Race Problem: Shall the Chinese Be Excluded?” The club adhered to the following procedure: “Each side shall be allowed twenty minutes, after which the question is open to the club for debate, no speaker to take over three minutes. The merits of the question will then be voted on.” As well as exposing women to the discipline of learning, literary circles introduced them to the world of intellectual analysis, arguing and defending a position, and confident self-expression.

Club meetings of the past tended to be official in every respect and emphasis was placed on proper decorum. For the Froula Reading Circle of St. Paul, as with most clubs, punctuality was required and three successive absences were taken as a sign of resignation, resulting in loss of membership. Article IV of the bylaws of the Inglenook Reading Club stated, “Each member must do the work assigned to her or procure a substitute.” During meetings, members referred to each other only by title and surname. Refreshments were banned from meetings and members did not go upstairs in each other’s homes in order to stress that housekeeping was secondary to intellectual pursuits.

The strictness of governance of these clubs reflects less their sense of self-importance than the collective significance they attached to their projects. The commitment to reading and critical thought is implicit in every regulation.