Minnesota writer Cheri Register has been the featured guest at nearly 100 book clubs since her memoir, “Packinghouse Daughter,” was published in 2000 by the Minnesota Historical Society.

She’ll never forget the well-to-do members of a Kenwood club, who bragged about how much money they’d saved by buying and circulating just one copy of her book. For entirely different reasons, she’ll never forget the members of the Library Book Club at Shakopee Women’s Correctional Facility. She and Linda Melting, her best friend from childhood and a central figure in the memoir, attended the club’s midsummer discussion together, and both have been “processing the experience ever since.”

To say that they had a captive audience is not to make a tasteless pun. Each of the 10 book club members was focused and prepared, with multiple Post-it notes marking pages and lengthy hand-written remarks. Except for occasional static from a staff member’s two-way radio, there were no interruptions or distractions.

“What I was struck by … was the intensity of their engagement with the book and with us,” Register said afterward. “So much more seemed at stake for them in the reading than for most people in book clubs I go to.”

Conflict still reverberates
“Packinghouse Daughter” looks back at the 1959 Wilson & Co. meatpackers’ strike in Albert Lea, Minn., a conflict that tore the town in two and reverberates to this day. Register was 14 at the time, and her memoir is part history, part treatise on class and labor and part homage to family and friends. Most poignant is her friendship with Linda Melting, a girl who “liked to talk about serious things, to sort out puzzling events and make sense of perplexing behavior.”

Register’s father was a union man, a millwright, whose pride in a job well done transcended the brutalities of the packinghouse, with its “thrusting and sawing, its death squeals and gushing blood.” Melting’s father was a meat salesman, a job not covered by the union. 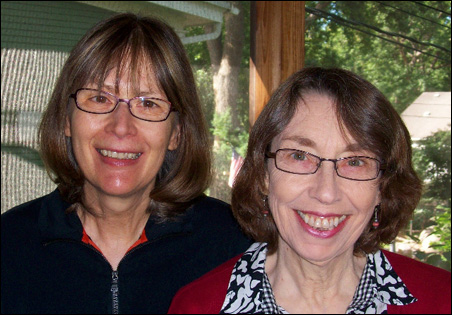 Cheri Register, right, with her best friend from childhood, Linda Melting: Their dads were on opposite sides of the picket line during the Wilson Co. strike.

When hostilities escalated during the strike, the girls took care not to let it drive a wedge between them. “The tension in the town was palpable,” Melting told the inmates. “And the fact that Cheri and I could remain friends and still do these girlish things together was just extraordinary.”

The memoir rings with Register’s outrage at the injustices spawned by privilege:

“Rich kids could smoke, drink, and make out promiscuously without retribution,” she writes, “but working-class kids who broke the rules risked their reputations, their liberty and their futures.”

Resonant themes
These blue-collar, working-class themes clearly resonated with the inmates, who spoke of their parents’ hardships, and their work in tanneries, on farms and in iron mines.

“I understand what it’s like to put things on the table, what things cost, what dentists cost,” said Heather W., whose father had tried farming to support the family. “I know all too well what that was like. … I’ve heard my dad cry when we had six years in a row of no rain, and we were about to lose everything. We were just kids, but when you hear that, your whole world stops.”

A chilling connection was made: With no place to sell meat during the strike, one inmate’s father could no longer afford to feed his pigs. “We could hear him shooting them from the house,” said Deb C. 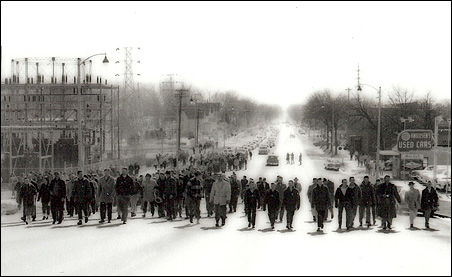 Courtesy of Kevin Savick
Strike supporters march down South Broadway in Albert Lea during a rally on Feb. 13, 1960.

And a funny memory shared: Register writes of how her father would sometimes bring home a magnet salvaged from a cow’s stomach (used to collect nails and wires that might otherwise puncture an intestine). ” I know how to put ’em down [the cows’ throats],” said Kelly N., who grew up on a farm in Fargo. She loved watching the powerful magnets suck up her dad’s pocket change.

Two of the inmates do not eat meat, and expressed gratitude to Register for including the chapter, “A Nod to Vegetarians.”

An eye-opener for the uninitiated
Cynthia H., who grew up in a suburb, said the book was an eye-opener. “I know nothing about unions, much less how to kill a cow,” she said, laughing. “I love meat, and I still love meat.”

Karol H., who works in the library, expressed regret that Register did not keep a diary. ” ‘But most of all I want my words to make the dim and misunderstood events of my childhood ring clear and true,’ ” she said, quoting from a page she had flagged. “I can imagine someone coming behind you and wanting those dim details of your life and then they won’t be there. How saddened they will be.”

Register said she can’t stop thinking about how still and attentive the women were, how closely they read the text, how deeply they connected with it.

“It surprised me and engaged me in a way I wasn’t expecting,” she said.

Register feels “called to return” and is negotiating to teach a monthly writing workshop at the prison. She is not motivated by sentimentality or do-goodism, she said. “I think about how people’s lives pivot on a series of bad choices that lead you in deeper, or one horrific moment that you get caught up in … and how that doesn’t explain totally who you are or what your potential is or what the substance of your life is.”

Connecting through books and writing is a way for the women “to bring coherence to their lives,” she said. “That’s what everyone’s doing. That’s why I write memoirs.”

Heather W.: “Your book was a trip down memory lane.”

Cheri Register: “Whether or not you wanted to take it.”

Other favorite reads: “Socrates Café,” by Christopher Phillips; “Three Cups of Tea,” by Greg Mortenson and David Oliver Relin; “The Places in Between,” by Rory Stewart; “The Keep,” by Jennifer Egan; “Kindred,” by Octavia Butler.

About the club: The club was established in 2007, and monthly discussions are held in the prison’s modest library, stocked with about 9,600 titles from various donors and the inmates themselves. Club members are self-selected and make a six-month commitment. At the members’ request, librarian Andrea Smith chooses the books for discussion. Otherwise, “it gets to be a very personal thing,” she said, “and people either don’t like the responsibility or the outcome.” Smith said she believes the club has “life-changing” potential for its members. “It’s a space that gives them time for reflection and conversation. … Here’s a spot where you’re not looked at as an offender first, you’re just looked at as a reader first.”

Up next for the Book Club Club: The men of Grand Rapids, Minn., read Bill Bryson’s “The Mother Tongue.”

Sarah T. Williams is a former books editor at the Star Tribune, where she worked as a news editor and reporter for 27 years. She lives in St. Paul with her husband, writer Jim Heynen.