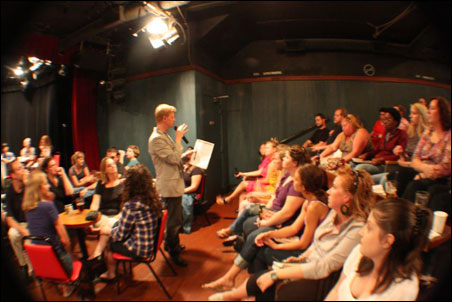 Books and Bars is not your average book group.

Started in 2004, the club gathers monthly in the auditorium of Bryant-Lake Bowl in Minneapolis to share brews, chow down on apps and burgers, and talk about books.

Produced and moderated by Jeff Kamin — a talented journalist, writer, and general book-nerd with a background in comedic acting — Books and Bars is likely the largest (and most jocular) book club in the Twin Cities.

“It’s like a wildly popular literature course with a funny, well-prepared prof,” describes member Liz Otteson, “… minus the exams, plus beer.”

With Kamin at the helm, Books and Bars is a combination dinner theater, improv show and book discussion. Meetings, which usually last one and a half hours, flood Bryant-Lake Bowl’s 85-seat-plus auditorium — mostly with 20- and 30-somethings.

To maintain a semblance of order in a group this size, members raise hands for a chance to speak. If called on by Kamin, a speaker gives his or her name before commenting. Although Kamin steers the conversation as necessary, discussion generally wanders where the audience leads.

Named the Best Reading Series of 2009 by City Pages, Books and Bars is a serious yet casual book discussion, an alluring combination of critical analysis and boozing.

A rocky start
In February, Books and Bars celebrated six years running. Although the club is now a smash hit, it wasn’t always evident it would make it this far.

Originally sponsored by Bound to Be Read bookstore in St. Paul, Books and Bars dissolved when the store went under in July 2005. During that summer, Kamin took up the cause of reviving the club. When Mary Magers proposed involving Magers and Quinn Booksellers, Kamin seized the opportunity. With Bryant-Lake Bowl and The Onion on board as additional sponsors, Kamin created the Books and Bars website, started an online forum, and established a presence on Facebook and Twitter.

After being down for a summer, Books and Bars was re-pitched and re-launched. Soon the refashioned club eclipsed its predecessor. When the club disbanded, attendance hovered around 30 or 40 members. Now, meetings overflow the Bryant-Lake Bowl auditorium. The club’s subscriber list has grown to 800 strong and more than 600 fans follow it on Facebook. And recently the group gained a fourth sponsor, mnartists.org.

Expansion
According to members, the popularity of Books and Bars — and its feasibility, considering its massive size — is mostly attributable to Kamin.

“A 70-plus-person book club could easily be intimidating, disjointed, or downright chaotic. But Jeff does an incredible job of facilitating the discussion,” said Otteson. “He balances the voices, connects the comments, and picks up lost threads of the discussion.”

“Jeff does a great job making sure we hear from many different voices — ‘fresh hands,’ he calls them,” says Cassie Dillion.

Although the number of participants precludes contribution from everyone on every topic, the club’s large-group format has its advantages.

“Attendees have incredibly diverse backgrounds, and all of their thoughts get mashed into one big, loud — sometimes crazy — and always interesting conversation,” says Emily Finley.

To cope with packed meetings, Kamin recently experimented with conducting Books and Bars twice a month, each with a different book selection. As it turned out, the biweekly meetings were filled to capacity.

Kamin urges people not to be discouraged by the popularity of the meetings. “Everyone always welcome!” he asserts. “But it is good to get there early.” Although the discussion doesn’t begin until 7 p.m., participants generally need to grab their seats between 6 (when doors open) and 6:30.

The club’s enthusiasm for book discussion — not to mention witty sarcasm — spills over onto the booksandbars.com forum, where members are highly active.

“The whole enterprise has simply exploded,” says Kamin. People from other states have started contacting Kamin about starting Books and Bars in their own cities.

It’s unclear at this point whether Books and Bars is reproducible, or whether its unique combination of elements — chief among them Kamin — is singular to the Twin Cities.

‘The voices of our generation’
Each year’s reading list is sure to include a plenitude of new authors.

“I try to give exposure to younger authors in their 20s or 30s,” says Kamin, “the ‘voices of our generation,’ although that’s a nebulous term.”

“It’s fun that the authors are still fresh enough off a certain work” to discuss their process without being reiterative, notes Levi Byers. Authors evince a genuine energy, an eagerness to hear responses to their writing. They are still surprised by audience questions, still able to discover things about their own work.

Innovation Skype
Holding Skype chats with authors is one more way Kamin has updated Books and Bars. The author’s computer visual is projected onto an onstage movie screen and audience members are given microphones to ask questions.

The first video chat took place in May 2009 with Seth Grahame-Smith, author of “Pride and Prejudice and Zombies.” Members found Grahame-Smith both amusing and compelling; the rousing success of the venture was a high point of Kamin’s years as moderator.

In December 2009, Hannah Tinti, author of “The Good Thief,” Skyped in while having a glass of wine in her Manhattan apartment. She introduced her dog and picked up her laptop to show the audience her apartment.

In February, the club video-chatted with “Ray of the Star” author Laird Hunt.

“It’s very cool to pick their brains,” says Cassie Dillon, “to learn how the story took shape, hear their thought process, and find out what they did or did not intend by a certain passage.”

And, unlike in-person author visits, video chats allow the book club private time to discuss the book without fear of offending the author.

“You can’t really kick out an author who visits in person,” says Kamin. “But with Skype, once the video feed gets turned off, I can turn to the audience and ask, ‘Now what did you really think about the book?’”

Kamin is key
When members talk about Books and Bars, they gush. Inevitably, they gush about Kamin. They praise his vivacity, cleverness, and dexterity, his humor and pop-culture savvy.

“He does a marvelous job of book-nerd wrangling,” says Elise Christenson.

He expertly maintains levity, providing comic relief when the mood becomes overly combative or morose. His mockery of the pedantic or pretentious is particularly amusing.

Aside from being the draw, Kamin is the glue that holds Books and Bars together. He doesn’t just pick the book titles; hours are put into researching each selection prior to the meeting. He also tries to prepare a few jokes and bits about the book, although most of his jesting is off-the-cuff.

In addition, Kamin serves as the club’s manager — arranging chats with authors, scheduling guest speakers, and booking additional venues. He maintains the website, writes the blog, and churns out the subscriber newsletter, which he writes in the style or voice of the book the club is currently reading.

“A lot of people have erroneous assumptions about what I do, why I’m here,” says Kamin.

Two of the most common misconceptions are that Kamin works for Magers and Quinn (which he doesn’t) and that he’s paid for his work with Books and Bars (which he should be, but isn’t).

Kamin values having a platform to advocate for literature and reading. “ I love being able to share reading with other people,” he says. He also relishes the opportunity to be in his element — performing and hosting.

Whatever his reasons, Kamin is certainly the heart and lifeblood of Books and Bars, giving longevity to what otherwise could have been a fad.

The pull
“Reinventing the book club.” That’s Books and Bars’ slogan — and that’s exactly what appeals to members.

Sure, this group analyses literature and exchanges views on real social, political, and ethical problems — but they do it in a warm, laughter-filled, slightly-buzzed atmosphere, as part of a night out with friends. Books and Bars is definitively hip, urban, and mixed-gender.

“It has an unreal energy that’s catchy,” says Kate Hillesheim.

Sponsor reps attend meetings, giving away prizes such as T-shirts, books, and movie passes for raising good questions or for going the extra mile and dressing up like a character from the book.

Members rave about the meeting on Jonathan Ames’ “Wake Up, Sir!,” when a regular dressed up in a tux and took on the role of “Jeeves.” Acting as Kamin’s personal servant, Jeeves distributed drinks to the crowd.

For this crew, attending book club is always a good time and always an adventure — and the size of Books and Bars makes it a good place to meet new people. As Emily Finley says, “It’s more than a group of people who get together and talk about books. I met a large portion of my close friends through B&B.”

As for the future of Books and Bars, Kamin would like to have more sponsorships and partnerships, and hopes to turn all his hard work into a paying gig.

Books and Bars meets the second Tuesday of each month at Bryant-Lake Bowl, 810 W. Lake St., Minneapolis. The events are free.