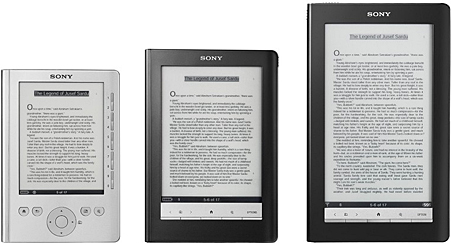 I predict print books will be around far into the future. But they will no longer be the only books in our lives.

E-books and e-readers: Ready or not, here they come. An estimated 11 million e-readers will be sold in the United States this year.

They’re slim and they’re light, and unlike computers and PDAs, their screens are not backlit. E-reader displays use e-ink technology and reflect light like ordinary paper and minimize eye strain. The slightly gray background of an e-ink display is easier to read in full sunlight than backlit screens and the brighter white of traditional paper books.

There’s a surfeit of different e-readers on the market; the most advanced allow you to download books anytime, anywhere — often in less than 60 seconds.

The highest-profile devices include the Amazon Kindle 2 and larger Kindle DX, the Sony Reader Touch and larger Reader Daily, the Barnes & Noble Nook, and the Apple iPad.

The iPad — with backlit IPS color display — is a multipurpose tablet that can be used as an e-reader; the other devices are dedicated e-readers with minimal additional functionality.

Granted, the Kindle is no longer a one-trick pony. It has a web browser with free 3G wireless and 3G roaming. The Nook is comparable to the Kindle, with a second small color LCD touchscreen instead of the keyboard found on the Kindle. The Nook lacks a built-in web browser, but the 1.3 software update includes a beta release of a basic browser.

The Sony Reader Daily Edition, with its large, auto-rotating screen, is similar to the Kindle DX, though it lacks a web browser.

If you’re primarily interested in reading books on a portable electronic device — particularly if you intend to read for hours at a time — the Kindle 2, Kindle DX, Reader Daily, and Nook are good options.

The Sony Reader Touch Edition is a less desirable choice in that it requires a PC connection to download books via the internet.

Here is a rundown of current e-readers (and you can find a handy comparison chart here [PDF]):

Kindles
Weighing the same as a mass market paperback, the Kindle 2 can store a vast collection of e-books (roughly 1,400).

Wirelessly downloading books onto Kindles is fast and flawless, and it’s one of the few e-readers with a text-to-speech feature. Amazon’s customer service and comprehensive catalog are also major selling points. 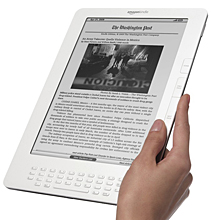 Linda Hulbert, associate director of collection management and services at the University of St. Thomas O’Shaughnessy-Frey Library, is impressed by the ease of using the Kindle 2.

“My 91-year-old mother even enjoys reading books on her Kindle!”

Hulbert’s favorite feature is the dictionary: Click on a word once for a short definition, twice for a longer one.

“If I come across an unfamiliar word when I’m reading a book, I’m not likely to get out of my chair and look up the word in a dictionary. The Kindle definitions are very convenient.”

In 2009, at the urging of Hulbert and other library staff, St. Thomas acquired five Kindle 2s. So far, the library has downloaded strictly fiction onto the e-readers — leisure reads that would not be purchased for their collections. The e-readers are available for students, faculty, and staff to check out for three-week periods — but the waiting list is long.

The e-readers have been wildly popular at St. Thomas, and the O’Shaughnessy-Frey Library is in the process of purchasing more. The libraries at Macalester College and Bethel University have also acquired Kindle 2s.

At $250, the Kindle 2 is quite reasonably priced, says Hulbert.

“The library buys individual books that cost that much!”

He tried reading instructional materials on the Kindle, expecting to find the ability to do text searches useful. Instead, he became frustrated with the difficulty of moving back and forth through the documents.

“The format and screen-refresh speed of the Kindle’s e-ink display aren’t as well-suited to skim and flip through material as they are to reading linear text.”

For this reason, Hauser continues to read blogs, newspapers, magazines on his computer.

Marge Barrett, a writer who teaches at the Loft Literary Center in Minneapolis and blogs for MinnPost’s Book Club Club section, also finds jumping around a text to be frustrating on a Kindle.

“I feel sort of claustrophobic on the page,” she says. Like Hauser, Barrett uses her Kindle 2 primarily for lighter fiction reading.

“Any book I might want to teach or reference, I buy and mark up.”

A user can type notes on a Kindle and upload them to the web, “But it’s not the same as writing in the book and making it your own,” says Barrett. Moreover, it’s nearly impossible to reference passages in the text when the Kindle doesn’t provide standard page numbers. Instead, the Amazon uses a proprietary system of “location numbers” and displays percentages of read and unread text, a universal annoyance for Kindle owners.

Although hundreds of thousands of e-books are available for free from sites like Project Guttenberg and Feedbooks, most new releases have prices comparable to their paperback counterparts.

“I’d like to see e-book prices reflect the fact that they don’t incur the costs of printing, warehousing, or shipping,” says Hauser.

Book borrowing
One common complaint about e-readers is the limited ability to share purchased books with friends and family. 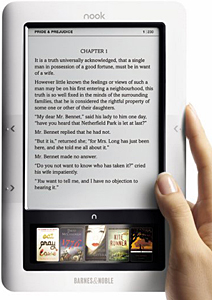 The DRM (Digital Rights Management) incorporated into e-books purchased from the Kindle Store, iBooks, the Sony Daily Edition Reader Store, and other retailers, prevents the buyer from passing along a good read — to just anyone, that is.

All of these retailers allow a purchased e-book to be downloaded by a set number of people (five to six) on the same store account (same credit card).

Like the rest, Barnes & Noble e-books are DRM-protected. Unlike the rest, the Nook has a special LendMe feature, which allows a book to be lent out for up to 14 days, during which time it disappears from the lender’s Nook.

This much-touted feature is far more restrictive than the DRM wrapping used by Apple and Amazon. First, only certain e-books available on the Nook can actually be lent out. Second, an e-book can only be lent out once.

The iPad
Initial data indicate that the largest group of Kindle owners are people in their 50s. Because Apple already captured the hearts, minds and wallets of the younger market with the iPod and iPhone, my guess is it will have a competitive edge with young consumers when it comes to electronic reading.

Unlike e-readers, the iPad — which Apple theatrically describes as “magical and revolutionary” — is a multipurpose computing tablet capable of functioning as an e-reader. And, since the iPad has IPS color instead of e-ink, it’s especially great for reading children’s books, art and design books, comic books and other graphics-heavy texts.

Some e-readers have MP3 players and elementary web browsers, but the uniquely powerful iPad functions as a simultaneous e-reader, productivity tool, Internet portal, and media player.

With the release of the Kindle app and the Nook app, iPad also became the only e-reader that can be a platform for additional e-readers.

Eric Newman, professor of neuroscience at the University of Minnesota, adores his iPad. 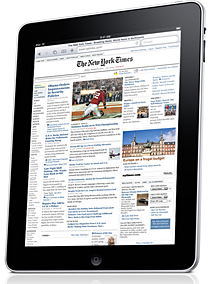 Newman especially likes the touchscreen interface and built-in light, although he admits it would be beneficial to have an even brighter built-in light for reading outdoors.

“I use my iPad all the time. I don’t read printed books. Ever.”

“I use it several hours a day.”

Cookbooks are the only texts Sabin still reads exclusively in print. (You wouldn’t want to spill melted butter or boiling water on your iPad, would you?) The iPad is heavier to carry around than e-readers, but Sabin says the weight is worth it because the tablet can do so much more.

But don’t harbor any delusions: An iPad will not replace your laptop. Although it’s designed to be a seamless multimedia device, it lacks Flash support and a widescreen aspect ratio. The iPad’s limited ability to multitask and lack of USB ports and a camera may also hinder mass appeal.

If you are looking for an e-reader with advanced web capabilities, then the iPad is a solid choice. If you want an iPad that can do more, you might want to hold out for the second generation or an Android competitor.

Generation Y
Although the Apple brand has the edge with Generation Y, it remains to be seen how sales break down demographically. I question the logic of those who suggest that the high cost of the iPad will deter young consumers from purchasing iPads. Twenty- and 30-somethings had no qualms doling out $400 for their iPhones.

The way I see it, if this time around the younger set fails to descend on Apple stores like a plague of locusts to snatch up the iPad, it’s because of the much broader disadvantage of any e-reader device: It’s another thing to lug around. My friends, who are all in their 20s, eagerly replaced their digital gadgets — MP3 players, cameras, handheld gaming consoles, cell phones — with 4G smart phones that consolidate their capabilities.

Convenience is key. We want fewer gadgets, not more.

Tellingly, Amazon Kindle and competitors have already released versions of their software for smart phones.

Are young people really willing to read on those tiny smartphone screens? Yes.

Plus, we don’t read much anyway.

From Kindle to iPad: Your guide to e-readers