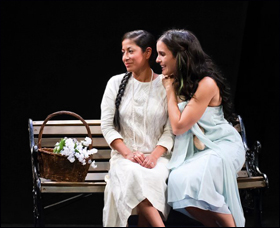 Written by Latina playwright and songwriter Caridad Svich, the family saga — spanning the 1920s through the 1970s — is told from the point of view of Alba, the youngest of the three generations of women.

While held captive by a military government, Alba (played by Christina Acosta Robinson) relives the Trueba family’s rise and fall, ultimately finding the strength to survive within her own story.

Directed by Marcela Lorca (“Caroline, or Change,” Guthrie Theater), Mixed Blood’s production of “Spirits” will be performed in English and Spanish and accessible to all theater-goers via projected translations.

Lorca,who came to the U.S. from Chile in 1983, says the production will be strongly rooted in Chilean culture. 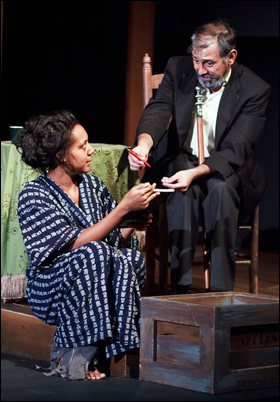 “Spirits,” Allende’s debut novel, is based on Chilean history and Allende’s own family narrative.

The novel focuses on the female experience, weaving myth and realism together; Lorca’s staging captures the vibrant magical realism, emphasizing the power of memory and imagination.

MinnPost is giving one lucky book club 10 tickets to “The House of the Spirits.”

If you are in a registered BCC club and want to attend, email bookclubclub [at] minnpost [dot] com by Friday, October 29 at 5 p.m. Please include your full name, the name of your club and the address to which tickets can be mailed.

“Spirits” runs through November 14. More details and a full performance calendar can be found here.