Last Thursday, Common Good Books hosted a reading by Eliza Griswold to promote her new book, “The Tenth Parallel: Dispatches from the Fault Line Between Christianity and Islam” (2010, Farrar, Straus and Giroux).

The hitch: Griswold never showed up.

As attendees trickled into the Virginia Street Swedenborgian Church and filled the pews, Garrison Keillor — owner of Common Good Books — paced the chancel making small talk with the audience and phoning the store’s events manager on his mobile. 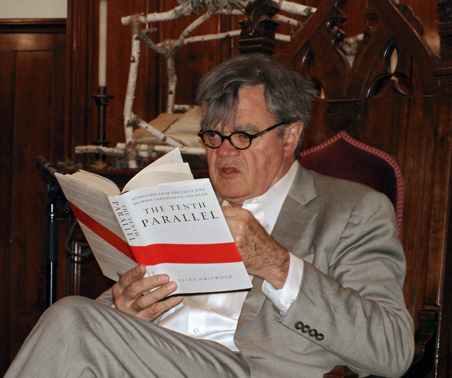 The church — a small, sage green Scandinavian-style structure designed by Cass Gilbert in 1886 — was dimly lit, candles flickering on every window ledge, giving the event the feel of a séance.

When Griswold failed to manifest, Keillor took the matter in hand, delivering an introduction to the “The Tenth Parallel” and its author.

An award-winning investigative journalist who has written extensively on the “War on Terror,” Griswold spent the past seven years traveling little-known parts of the world — including stretches of Nigeria, the Sudan, Somalia, Indonesia, Malaysia and the Philippines — chronicling the brutally violent misunderstandings and antagonism between the world’s two leading religious groups.

The result is in-depth analysis of turbulent Christian-Muslim relations in Africa and Asia along the fault line of the tenth parallel, home to more than half the world’s 1.3 billion Muslims and 60 percent of the world’s 2 billion Christians.

A conversation of one
“Did someone just walk in who might possibly be the author of this book?” Keillor asked the audience hopefully as he finished his introduction.

The author remained absent. The bookstore’s staff never were able to reach Griswold’s booking agent to figure out exactly what had gone wrong.

Sitting in a high-backed, velvet-cushioned chair, Keillor read selected passages from the book’s opening chapters on Nigeria — “A country that I, like most of you, have not devoted even 10 minutes to thinking about in the last year or two,” he admitted.

“[It’s] a part of the world that Americans avoid knowing about. Griswold puts us all to shame.” 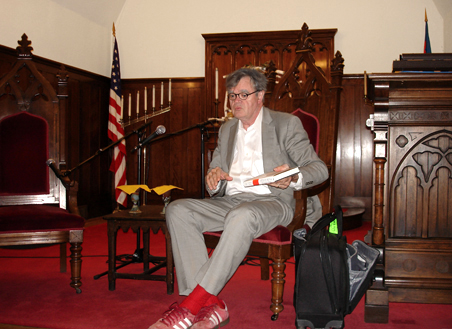 History Lesson
Wearing his signature red Adidas, his foot bouncing up and down to the rhythm of the prose and punctuating full stops, Keillor gave listeners a generous sampling of what he termed “a revolutionary work.”

Since 2001, Nigeria’s belt has been torn apart by violence between Christians and Muslims; tens of thousands have been killed as a result of religious skirmishes and faith-based genocide.

The largest petroleum producer in Subsaharan Africa and the fifth largest supplier of oil to the U.S., Nigeria is one of Africa’s wealthiest powers. Yet the economy remains in desperate condition — there are no jobs for the destitute masses — and the government is so riddled with corruption that it fails to supply much of the country with basic necessities like water, electricity and traversable roads.

In the bitter struggle to simply survive, many Nigerians have turned to religion to solve the problems that government won’t. Griswold points out that nearly all religious battles in Nigeria have arisen over secular issues such as election fraud, voting rights, and public housing.

“Being a Christian or a Muslim [. . .] and voting along religious lines has become the way to safeguard seemingly secular rights,” explained Keillor.

When Griswold interviewed the Nigerian emir, he stressed the fundamental similarities between the teachings of the Bible and the Qur’an, the mutual emphasis on religious acceptance. Christianity and Islam are deeply linked, but “leaders [do] not know of or else [have] forgotten their common bonds.”

When jobs in the region became increasingly scarce, the two religious groups began to see each other as objects of competition.

The decimated economy has resulted in over 60 million jobless youth, a “ready army free to man the front lines in any religious conflict,” said the emir.

A stunner
Despite Griswold’s absence, Keillor was ever-willing to extoll her talent, insight and skill.

“She’s an amazing poet by the way,” he said in reference to her collection “Wideawake Field” (2008, Farrar, Straus and Grioux).

“It absolutely stunned me, and I’m not easily stunned. I have a very thick head.”

Tapping the cover of “Tenth Parallel,” he concluded, “This book has stunned me as well.”

‘The Tenth Parallel’ — with or without Eliza Griswold