As we approach the second annual Book Club Blast, MinnPost has invited participating authors to answer a few questions about their writing and inspiration. Responses from our Keynote Speaker, Speed-Chatters, and Meet & Minglers will be published over the next two weeks. To meet this remarkable lineup of Minnesota authors, register here and reserve your spot at the Book Club Blast. 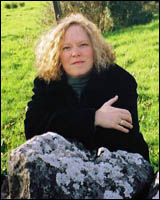 MinnPost: Tell us about your recent book release and current projects.
Erin Hart: The trade paper edition of “False Mermaid” (tailored for book clubs, with discussion questions in the back) will be in bookstores on March 10, 2011. I’m currently at work on the fourth book in the Cormac Maguire/Nora Gavin series, with the working title “The Serpent’s Egg,” which will be finished in June, and published (I hope) sometime in 2012. I’m also newly elected as the local chapter president of Sisters in Crime, a national organization that promotes the work of women crime writers. We have monthly meetings at Once Upon a Crime (first Tuesday of the month) open to all, usually featuring guest speakers on various crime-related topics.

MP: Which authors have been the strongest influences on your own writing?
EH: I’ve always enjoyed writers who manage to conjure up plenty of atmosphere in addition to a good story. I guess my greatest influences in the mystery genre would probably include writers like P.D. James, Elizabeth George, Minette Walters and Martin Cruz Smith. I read everything by Phyllis A. Whitney as an adolescent, so I think some of her gothic-adventure vibe rubbed off on me. In general, I’ve probably been influenced by the writers I’ve loved to read: Charles Dickens, Anton Chekhov, Arthur Conan Doyle, A.S. Byatt, John Fowles and Seamus Heaney, along with many interpreters of mythology, songs and ballads, and folk tales.

MP: What do you love most about living in Minnesota?
EH: I love the depth and richness of the arts and culture in Minnesota! Not only do we have outstanding library systems in every region, but there’s a real connection to all the arts — music, dance, theater, visual arts, literature and folk arts — throughout our state that I think is pretty spectacular.