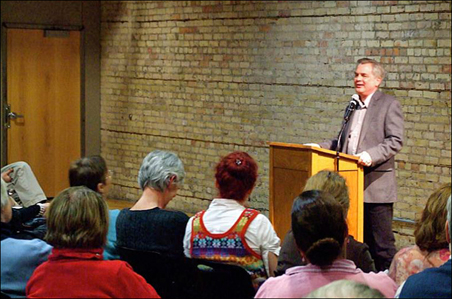 With a bottle of Stella Artois in hand and a confident swagger, David Housewright took the podium in the Open Book auditorium and took a stand for mystery writers everywhere — for the validity, artistry and strength of their genre.

As he discussed the historical antagonism between literary fiction and genre fiction, Housewright kept the audience roaring with laughter with a litany of accounts of snubbings by critics, professors and other literary types.

Although he kept the audience entertained with his sarcasm, self-mockery and hilarious punchlines, he made a serious case for the importance and relevance of genre fiction, particularly its willingness to address volatile social issues such as women’s rights, GLBT rights, racism and poverty.

As Blast speed-chat author — and Star Tribune Books Editor — Laurie Hertzel said on the newspaper’s Artcetera blog, “Housewright’s message was that good writing, and good storytelling, should transcend genre and that writers of mysteries, sci fi, and romance should not be pigeonholed.”