Only one week until the premiere of “Agnes Under the Big Top,” and Mixed Blood has become a virtual subway station, with growling trains, muddled announcer sounds rumbling through the building, and beat-box rhythms from our very own busker (Nick Demeris) adding a hip-hop aura. Mix that with the Bulgarian, Indian and Liberian accents in the air, and it’s a wonderful cacophony of intersecting lives and sounds. Come and see! 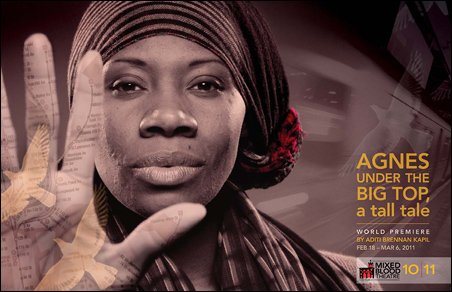 Under the figurative Big Top and propelled by the rhythms of a subway train, five newcomers find and redefine themselves in their new land — Agnes, a Liberian homecare worker (Sha Cage) employed by bedridden Ella (Linda Kelsey in her Mixed Blood debut), an itinerant transit busker (Nick Demeris), a Bulgarian ringmaster and his wife (Nathaniel Fuller and Virginia Burke) and an Indian call center escapee (Ankit Dogra).

Combining a grey subterranean world with music, clowning and unexpected junctions, “Agnes Under the Big Top” follows these characters’ journeys as they search for beauty amidst the chaos of migration.

“I wanted to celebrate the immigrant spirit — that hope and faith that makes a person leap from the known to the unknown. I wanted to mythologize migration, as part of the gorgeous spectacle of the human condition, because as well as being Indians and Bulgarians and Swedes and whatever else, my people are immigrants. That’s our shared identity.”

Kapil, director of “Ruined” and “Messy Utopia” — both Ivey Award-winning Mixed Blood productions — and her artistic team have crafted a new configuration for the theatre that immerses the audience in an international world as the fable criss-crosses the globe from Monrovia to Mumbai, from Eastern Europe to the East Coast.

“Agnes Under the Big Top” runs from February 18 through March 6 at Mixed Blood’s historic firehouse theatre on the West Bank in Minneapolis.

MinnPost readers, this is the last week you can enter to win 10 tickets for your book club to see the world premiere of Aditi Brennan Kapil’s “Agnes Under the Big Top, a tall tale” at Mixed Blood Theatre.

If you are a registered BCC club and want to attend a performance, email bookclubclub [at] minnpost [dot] com by Friday, Feb. 18 at 5 p.m. Please include your full name, the name of your club and a mailing address where tickets can be sent.