MinnPost is offering your book club a chance to win tickets to the world premiere of Aditi Brennan Kapil’s magical adventure, “Agnes Under the Big Top, a tall tale,” presented by Mixed Blood Theatre.

A National Endowment for the Arts’ Distinguished American New Play, “Agnes Under the Big Top” imagines the intersecting lives of immigrants in today’s America with gritty candor and humor.

Under the figurative Big Top and propelled by the rhythms of a subway train, five newcomers find and redefine themselves in their new land — Agnes, a Liberian homecare worker (Sha Cage) employed by bedridden Ella (Linda Kelsey in her Mixed Blood debut), an itinerant transit busker (Nick Demeris), a Bulgarian ringmaster and his wife (Nathaniel Fuller and Virginia Burke) and an Indian call center escapee (Ankit Dogra).

Combining a grey subterranean world with music, clowning and unexpected junctions, “Agnes Under the Big Top” follows these characters’ journeys as they search for beauty amidst the chaos of migration. 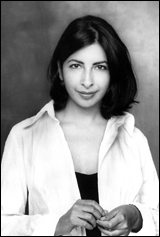 “I’m an immigrant born of immigrant parents. The shifting identities, the multiple languages sifting every thought, the disconnect from family history are inescapable parts of how I think and see the world,” said Kapil.

“I also wanted to celebrate the immigrant spirit — that hope and faith that makes a person leap from the known to the unknown. I wanted to mythologize migration, as part of the gorgeous spectacle of the human condition, because as well as being Indians and Bulgarians and Swedes and whatever else, my people are immigrants. That’s our shared identity.”

Kapil, director of “Ruined” and “Messy Utopia” — both Ivey Award-winning Mixed Blood productions — and her artistic team have crafted a new configuration for the theatre that immerses the audience in an international world as the fable criss-crosses the globe from Monrovia to Mumbai, from Eastern Europe to the East Coast. 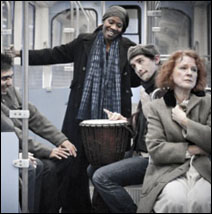 According to Artistic Director Jack Reuler, “‘Agnes’ brims with optimism, convenes disparate individuals on stage, challenges the use of our reconfigurable space, and does so all within the 90-minute intermissionless form that is our signature. [Aditi] is an international treasure who flatters us by calling Minnesota and Mixed Blood her artistic home!”

“Agnes Under the Big Top” will run from February 18 through March 6 in the Alan Page Auditorium of Mixed Blood’s historic firehouse theatre, located on the West Bank in Minneapolis.

MinnPost is giving away 10 tickets to “Agnes Under the Big Top”
(performance date undesignated).

If you are a registered BCC club and want to attend a performance, email bookclubclub [at] minnpost [dot] com by Friday, Feb. 18 at 5 p.m. Please include your full name, the name of your club and a mailing address where tickets can be sent.