The Tony Award-winning hit revival “HAIR: The American Tribal Love-Rock Musical” will be coming to the Orpheum Theatre March 1-6, and MinnPost is offering book clubs a chance to win 10 tickets to the opening night performance.

Directed by Diane Paulus and choreographed by Karole Armitage, the musical follows a group of hopeful, free-spirited young people who advocate a lifestyle of pacifism and free-love in a society riddled with intolerance and brutality during the Vietnam War.

As they explore sexual identity, challenge racism, experiment with drugs and burn draft cards, the show resonates with an irresistible message of hope more than 40 years after it first opened on Broadway.

With a score that includes groundbreaking numbers like “Let the Sun Shine In,” “Aquarius,” “Hair” and “Good Morning Starshine,” “HAIR” depicts the birth of a cultural movement in the ’60s and ’70s that changed America forever.

Time Out New York raved, “‘HAIR’ speaks to a whole new generation!” and the Los Angeles Times gushed, “Exhilarating! Floating on a cloud of euphoria…connects us to what inspired an era to reinvent itself.”

MinnPost is giving away 10 tickets to the opening night performance of “HAIR,” Tuesday, March 1, at 7:30 p.m.

If you are a registered BCC club, enter to win tickets by emailing bookclubclub [at] minnpost [dot] com by this Friday, Feb. 25 at 5 p.m. Please include your full name, the name of your club and a mailing address where tickets can be sent. 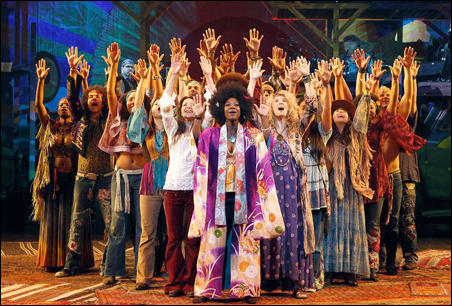