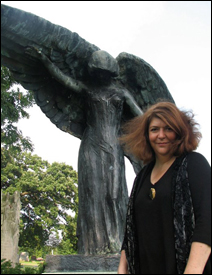 The nearly century-old graveyard statue — sculpted in bronze by Mario Korbel as a memorial to Teresa Dolezal Feldevert; her second husband, Nicholas Feldevert; and her son by her first marriage, Eddie Dolezal — is steeped in local lore and superstition.

Beautiful but eerie, the monument is considered one of Iowa’s most haunted sites, both because of its strange posture — wings and head facing downward instead of tilted up toward heaven — and its mysterious change in color from golden bronze to gruesome black.

In “Killing Kate,” a murderer striking across the Midwest is drawing angel-shaped chalk outlines around the bodies of his victims. As TV reporter Riley Spartz investigates, she unearths the disturbing legend and finds herself pitted against a delusional young man who believes a cemetery statue is urging him to kill.

“Iowa’s Black Angel is so rich in superstition, I couldn’t resist making it the center of fresh controversy,” Kramer says. “Maybe, deep down, I’m hoping angels will be the next vampires.”

“People always have lots of questions about how the media works,” says Kramer. “I think that’s one of the strengths of my books; I take people inside how newsrooms make decisions such as which missing people get publicity and which don’t. And that can get ugly. But it makes for provocative storytelling, especially in this time of media meltdown.”

” ‘Killing Kate’ is a little scarier than my other books,” Kramer warns readers. “I was even scared writing it….[but] I felt it was the right path for my series.”

MinnPost, in conjunction with Atria Books, is giving away five hardcover copies of “Killing Kate” to new BCC members!

To enter to win, register your book club with BCC by 5 p.m. on Friday, Sept. 2. Individuals can enter to win by signing up to receive the BCC newsletter (tick the box next to “Book Club Club e-mail newsletter”).

Once you have registered your club or signed up to receive newsletters, please email Book Club Club with your full name, email address and a mailing address where book prizes can be sent.

Julie Kramer grew up on a corn and cattle farm along the Minnesota-Iowa state that has been in her family for more than 130 years. A journalist turned novelist, Kramer formerly ran WCCO-TV’s nationally award-winning investigative unit in Minneapolis. She continues to work as a freelance network news producer, in addition to devoting time to writing. Kramer is a winner of the Minnesota Book Award and the RT Reviewers Award for Best First Mystery. She has also been a finalist for the Anthony, Barry, Shamus, Mary Higgins Clark and Daphne du Maurier Awards.