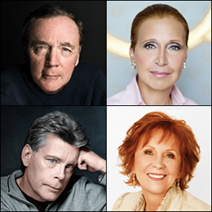 Forbes has just released their 2011 list of the world’s highest-paid authors (based on earnings from May 2010 to April 2011), and some of them may surprise you. We’ll tell you how much each author made, why you should know their names, and how they beat the recession’s effect on the fiction industry.
– Megan Wasson, Monitor contributor

James Patterson made a cool $84 million between May 2010 and April 2011 and signed a 17-book, $150-million contract with Hachette Book Group. The reason Patterson is doing so well while fiction sales across the publishing industry have plummeted? He’s cornered the adult and the young adult markets. Adults will be familiar with his Alex Cross series — thrillers about an American psychologist — while kids will know him as the author of the “Maximum Ride” series.

It’s no surprise that immensely popular romance novelist Danielle Steel makes the 2011 list with earnings of $35 million. Currently the eighth best-selling author of all time, Steel is responsible for many well-loved novels, including “Jewels,” “The Ghost,” and “Matters of the Heart.”

The thriller/mystery/horror master raked in $28 million during the 12 months tracked for this list. Although King is best known for his darker novels, including “The Shining,” “Salem’s Lot,” and “It,” 2011 marks an interesting year for him. His newest book, set to come out in November, is called “11/22/63” and takes a departure from the horror genre to explore a time-traveling man sent back to stop JFK’s assassination. So next year, this number could be even higher.

Meyer, the author of the famed “Twilight” series, didn’t actually publish anything this year, but she still managed to make $21 million. The “Twilight” series is still selling copy after copy of the four books in the series: “Twilight,” “Eclipse,” “New Moon” and “Breaking Dawn,” along with a companion book to the series, “The Short Second Life of Bree Tanner.” The popularity of the books has been boosted immensely by the series of films based on “Twilight” — films to which you’ve probably been dragged by any teenage girl you’re related to.

Rick Riordan — yet another superstar in the young adult market — also made $21 million this past year. Riordan writes the bestselling “Percy Jackson and the Olympians” series, recently made into a film in the U.S. The series stars Percy Jackson, demi-god son of Poseidon, who finds out that the Greek/Roman gods (and monsters) are still alive and well in the modern world, and he must work to both discover his heritage and protect the world from the forces of evil.

Science fiction author and many time best-seller Dean Koontz earned $19 million over the past year. Koontz is most famous for his books “Demon Seed” and “Strangers.” “Strangers” features a group of people with equally odd illnesses who meet up in the desert to try to figure out what’s happened to them. In true science fiction fashion, aliens are involved.

John Grisham not only made $18 million this year, he’s one of only three authors to sell over two million copies of a book in its first printing (in good company with Tom Clancy and J.K. Rowling). Known for his gripping legal thrillers, some of Grisham’s most famous books include “The Firm,” adapted into a film starring Tom Cruise; “The Pelican Brief,” made into a film featuring Julia Roberts; and “The Runaway Jury,” adapted into a film with John Cusack. If that’s not a testament to his writing, we don’t know what is.

Nicholas Sparks, quintessential romance novelist, made $16 million to hit the No. 10 spot on the list. Sparks is the author of novels such as “The Notebook,” made into an extremely popular film featuring Rachel McAdams and Ryan Gosling; “Nights in Rodanthe” and “A Walk to Remember.” More than half of his published novels have been (or are being) made into films.