Book Club Club wants to hear the latest dish from our readers — which books you’re reading, excited to delve into, or can’t wait to share. 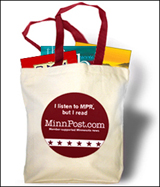 Send in your recent reads and book recommendations or (rejections) and you’ll be entered to win one of three deluxe black MinnPost shoulder bags [not pictured] filled with terrific books sure to captivate and entertain.

Each bag contains an assorment of hardcover and paperback books in a variety of genres — fiction, nonfiction, poetry and coffee table books — plus a little MinnPost swag, as well!

How’s that for incentive?

Check out the great selection of titles below and read the Contest Guidlines at the end of this post.

Aptly named, “Eat Quite Everything You See” is concerned with the various desires for sex, children, companionship and other ineffables. The force and lack of specificity of the speaker’s needs drive her across Europe, mostly through France, spurred by the Derridean epigraph “What is at stake is an adventure of vision,” telling new stories and retracing those from her past.

“I Curse the River of Time” by Per Petterson (translated by Charlotte Barslund)
Harvill Secker, 256 pp., hardcover

It’s 1989 and all over Europe Communism is crumbling. Lonely protagonist Arvid Jansen is in the throes of a divorce at the same time his mother is diagnosed with cancer. Over a few intense autumn days, Norwegian writer Per Petterson follows Arvid as he struggles to find a new footing in his life, while everything around him is changing at staggering speed.

“The Wilder Life: My Adventures in the Lost World of Little House on the Prairie” by Wendy McClure
Riverhead Books, 352 pp., hardcover

Wendy McClure is on a quest to find the world of beloved “Little House on the Prairie” author Laura Ingalls Wilder — a fantastic realm of fiction, history and places she’s never been to, yet somehow knows by heart. She retraces the pioneer journey of the Ingalls family — looking for the Big Woods among the medium trees in Wisconsin, wading in Plum Creek and enduring a prairie hailstorm in South Dakota. Along the way she comes to understand how Wilder’s life and work have shaped our ideas about girlhood and the American West.

Twenty years ago, Bill McKibben offered one of the earliest warnings about the inevitable impact of global warming with “The End of Nature.” Twelve books later, the committed environmentalist concedes that the earth has lost climatic stability. Passed the tipping point for dramatic climate change, our world will continue warming, triggering more extreme storms, droughts and other erratic catastrophes, for centuries to come. Humanity’s survival depends, McKibben argues, on scaling back.

Acclaimed photographer Wing Young Huie explores the complex cultural and socioeconomic diversity of the St. Paul neighborhoods along University Avenue, documenting the everyday lives of citizens connected by this singular street. The book, which springs from the public exhibition of the same name, explores the power of photography to destroy stereotypes and reveal cultural richness among the peoples of a city.

In Geye’s debut novel, an estranged father and son find reconciliation in the final week of the father’s life. Set in the wooded areas around a small lake north of Duluth and in the tempestuous waters of Lake Superior, the story draws parallels between the men’s strained relationship and the tumultuous sea.

After years abroad, Lucy returns home from Japan. At a crossroads in her life, she is newly haunted by her father’s unresolved death a decade ago. When she uncovers a secret and complex family history, the family story she has always known is shattered — then dramatically reconfigured, emboldening her to live with freedom.

This collection of poems continues Logue’s lyrical examinations begun with her previous books of poetry, “Discriminating Evidence,” “Settling” and “Meticulous Attachment.” These books chronicled the poet’s journey to let go of the past, embrace the future and live in the moment. As Logue wrote this fourth collection, however, she admits she was feeling afraid; the world seemed unsettled, uncertain, and full of conflict. These poems reclaim a lost sense of control.

Kathryn Stockett’s debut novel is a provocative and inspiring look at what happens when a southern town’s unspoken code of rules is shattered by three courageous women who strike up an unlikely friendship. Skeeter, Aibileen and Minny — three very different, extraordinary women in Mississippi during the 1960s, build an unlikely friendship around a secret writing project that breaks societal rules and puts them all at risk.

In this historical novel, Mary Sutter is a brilliant, headstrong midwife from Albany, N.Y., who dreams of becoming a surgeon. Determined to overcome the prejudices against women in medicine — and eager to run away from a recent heartbreak — Mary leaves home and travels to Washington, D.C. to help tend the legions of Civil War wounded.

“Nickel and Dimed: On (Not) Getting By in America” by Barbara Ehrenreich
Holt Paperbacks, 240 pp., softcover

Millions of Americans work for poverty-level wages. Inspired in part by the rhetoric surrounding welfare reform, which promised that any job equals a better life, Barbara Ehrenreich decided to join the working poor to find out how can anyone survive, let alone prosper, on $6 to $7 an hour. “Nickel and Dimed” reveals low-wage America in all its tenacity, anxiety, and surprising generosity — a land of Big Boxes, fast food, and a thousand desperate strategies for survival.

Claudius Aelianus (also known as Aelian) was a second-century A.D. Roman encyclopedist whose “De Natura Animalium” was esteemed enough in his time to survive more or less whole; the book comprises most of what we know of Aelian’s work today. A randomly-ordered, often perposterous collection of stories about animals, Aelian’s book constitutes an early encyclopedia of animal behavior, affording unparalleled insight into what ancient Romans knew and thought about animals.

In Geye’s debut novel, an estranged father and son find reconciliation in the final week of the father’s life. Set in the wooded areas around a small lake north of Duluth and in the tempestuous waters of Lake Superior, the story draws parallels between the men’s strained relationship and the tumultuous sea.

In 1962, Igor Stravinsky, long an expatriate, agreed to return to Soviet Russia to conduct his last symphony. In Leningrad, people began lining up to buy tickets a year in advance, hoping to secure themselves spots at a concert they wer unsure would ever happen. The line evolved into a kind of microsociety, with those in the queue interacting almost like family. Inspired by these historical events, Grushin’s imaginative narrative speaks to the human longing for something wonderful and miraculous, and the endurance of the human spirit.

Four mothers, four daughters, four families whose histories shift with the four winds depending on who’s “saying” the stories. In 1949, four Chinese women, recent immigrants to San Francisco, begin meeting to eat dim sum, play mahjong and share the secret stories of their lives. United in shared unspeakable loss and hope, they call themselves the Joy Luck Club. Set forty years later, this novel explores the tender and tenacious bond between mothers and daughters, as each woman reveals her secrets, trying to unravel the truth about her life.

Conceived in the years before Hurricane Katrina and deeply influenced by its aftermath, “Saltwater Empire” is an assemblage of geographical metaphor expressed in original lyrics, text from “The Tempest” and the voices of New Orleans. As the poems enter the ecological, political and religious miasma of the Gulf Coast, their moral, philosophical and literary complexity offer a perceptive look at cataclysmic disaster, human cruelty and cultural resilience.

Winner of the 2008 National Book Critics Circle Award and the 2008 Pulitzer Prize for Fiction, this novel immerses readers in the tumultuous life of Oscar, a sweet but disastrously overweight, lovesick Dominican-American ghetto nerd. From his home in New Jersey, where he lives with his old-world mother and rebellious sister, Oscar dreams of becoming the Dominican J. R. R. Tolkien and, most of all, of finding love. Miserably, the FukS-the curse has haunted Oscar’s family for generations, dooming them to prison, torture, tragic accidents and ill-starred love. Still waiting for his first kiss, Oscar is just its most recent victim.

Milo Burke — husband, father, development officer at a third-tier university — has just joined the burgeoning class of the newly unemployed. Grasping after odd jobs, Milo is relieved to get another chance from his former boss. All he has to do is reel in a potential donor who, mysteriously, has requested Milo’s involvement. Exploring themes like work, war, sex, class, child rearing, romantic comedies, Benjamin Franklin, cooking shows on death row, and the eroticization of chicken wire, “The Ask” is a hilarious black comedy.

Rushmore McKenzie is a retired cop, an unexpected millionaire and, occasionally, an unlicensed private investigator. So it isn’t the biggest surprise in the world when he’s attacked and kidnapped from his home — McKenzie has more than a few enemies out there with a grudge against him. But it is a surprise when it turns out his kidnapping is a case of mistaken identity.

Compiled by the editors of St. Lynn’s Press from their personal files, “The Inspired Gardener” is an exuberant, design-driven book (multiple typefaces, full-color photos and line drawings) featuring inspirational, serious and humorous garden quotes ranging from Aristotle to Alice Walker.

Blessed with beauty, talent, and a loving family, the Aschers seem to have it all. Then one winter night, 17-year-old Thomas dies, and the Aschers lose everything. More than a decade later, as their daughter Emily’s wedding approaches, the family yearns to reconnect. But in order to do so, Joe, Laura, and Emily will first have to confront the tangle of blame, guilt, and long-held secrets that tore them apart.

Looking to reconnect with their ancestral home and with one another, three generations of Chinese-American women take a two-week tour of mainland China — a journey that will change their family forever. As they search for culural identity, these six fiercely independent women discover the powerful thread that binds their lives.

To enter to win a MinnPost tote filled with great books, email your book recommendations and reading lists to bookclubclub [at] minnpost [dot] com by 5 p.m. on Monday, Oct. 3, 2011. Please include your full name, the name of your registered book club (or the email address where you receive BCC newsletters), and a mailing address where prizes can be sent.

Individuals who already submitted book recommendations and recent or upcoming reads within the past three weeks are automatically entered to win!

To be eligible, you must be a member of a registered BBC book club or be signed up to receive BCC newsletters.

To register your book club, click here or use the link on the righthand column of this page.

To sign up to receive BCC newsletters, click here; in the new window, tick the box next to “Book Club Club e-mail newsletter”.