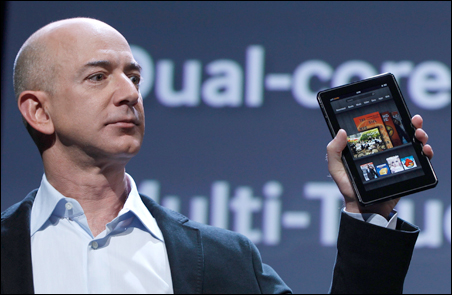 Amazon has certainly grabbed the latest bragging rights in the ongoing tablet wars with Wednesday’s unveiling of the Kindle Fire.

Sure, you can argue the fine points when comparing it to the Apple iPad, the industry frontrunner — Wi-Fi versus 3G, no camera or microphone, 8 GB storage with unlimited cloud storage versus a hefty 32 GB onboard the iPad.

But, the price point of $199, less than half that of the cheapest iPad, kicks open the tablet market to the mainstream, say tech watchers. And, they add, turns an important page in the evolving tale of digital publishing.

“This price point is what everyone has been waiting for,” says Mary Monahan, managing partner and research director of Javelin Strategy & Research, a third-party analyst firm. “Tablets themselves were game-changers, but a lot of people who were on the fence are going to be jumping down and getting in the game now,” she says.

With this cheap entry point, she adds, “this is something you will see families putting in the hands of children. It will be the must-have gift this Christmas season, no doubt.” The Kindle Fire will be available Nov. 15.

Amazon’s new device is the online giant’s bid to be ready for the future of digital content, says David Lankes, a professor and director of the library science program at Syracuse University’s iSchool in New York.

While the Fire is not the most technically advanced e-reader or tablet on the market, it has some real hidden advantages, he says, such as the Amazon cloud storage and processing systems that Amazon has been providing to businesses for years.

“While many consumers haven’t heard about it, Amazon’s cloud back end makes local storage less important, and the cloud-based computing is starting to do interesting things like make browsing the Web much faster by doing a lot of the processing up in a very fast network and then sending it to the device,” he says via email.

The price is pretty incredible, he says, adding, “and they are clearly aiming for folks who aren’t quite sure what a tablet is, but can instantly get the idea of a ready platform to read, watch movies on, and surf the web.” 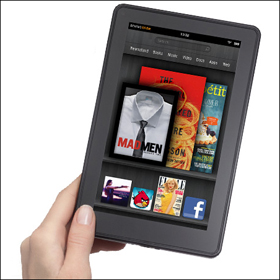 The Fire will have a far-reaching impact, says e-commerce expert Fiona Dias of ShopRunner. It will accelerate people’s rush to online commerce by simplifying access even more, she says, noting that it is smaller than the iPad and is directly linked into the vast proprietary Amazon universe.

“This makes this a very sticky product which will encourage even more loyalty to Amazon,” she says. The cloud storage service means the millions of Amazon customers will stay where their books and movies and music are stored rather than crossing into other platforms and online services.

This mainstream penetration is good news to e-book authors and publishers, says Jonathan Taplin, director of the Annenberg Innovation Lab at the University of Southern California.

He recently published an “enhanced e-book,” called “Outlaw Blues,” with 100 videos. “These are the kinds of books that you couldn’t access on the old Kindle,” he points out, adding that this iteration of the e-reader opens the door to the next chapter in online publishing.

“This may seem like a small segment of the market at the moment,” he says, but it is coming next and it is coming fast. “Amazon is just positioning itself to be ready for that marketplace.”

These price wars are an important step in hastening the next generation of publishing, says author Lori Aronsohn, who just released “Iowa Farms, California Tables,” an e-book available on all current platforms — iPad, Sony Reader, Kindle and Nook.

She says with that price tag, she would pick one up for her son. But more important, it opens up the educational market.

“I’d like to see the day when it’s standard for students to have all their books on a tablet,” she says via email.

A tablet allows users to electronically do all that they can do with a physical book, from highlighting passages and taking notes, to copying and pasting passages into new documents for writing reports.

“It’s easier for school kids to carry around a tablet than to lug those heavy backpacks full of one-use hardbacks,” she says. “Trees would be saved, and our environment would be better off with less need for printing ink to be produced.”