Next Tuesday, Talk of the Stacks will open its fall season with acclaimed Somali novelist, Nuruddin Farah.

Farah will read from his newest work, “Crossbones,” the final volume in his Past Imperfect trilogy, which imagines possible modes of a return to Somalia.

Although it follows-up “Links” and “Knots,” the highly topical novel can also be read as a stand-alone work, a fascinating look at individuals caught in the maw of zealotry, profiteering and political conflict.

Kirkus Reviews described “Crossbones” as a “gripping but utterly humane thriller set in one of the least understood regions on earth;” Publishers Weekly called the novel “an insightful portrait of his African country imploding so furiously that neither well-educated citizens nor well-meaning exiles who return can alter the trajectory.” 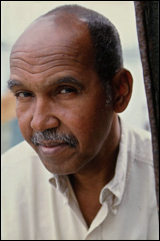 A celebrated feminist African writer, Farah was born in 1945 in Baidoa, in what is now Somalia, and grew up in Kallafo, in the Somali-speaking Ogaden region of Ethiopia.

The author of 11 novels, a nonfiction book about the Somali diaspora, and numerous plays and journalistic pieces, Farah is known for tackling the controversial and complex topics of arranged marriages, patriarchal constructs, government dictatorships and exile.

Farah himself was pushed into exile by the dictator Siyad Barre long before the collapse of Somalia’s government.

Currently, Farah co-resides in Capetown, South Africa, and Minneapolis, Minn., where he is serving as 2010-2012 Winton Chair in the Liberal Arts at the University of Minnesota.

Farah’s work has been translated into more than 20 languages and has won numerous awards, including the prestigious Neustadt International Prize for Literature for his Blood in the Sun trilogy, which consisted of “Maps,” “Gifts” and “Secrets.”

Join Talk of the Stacks in welcoming one of Africa’s greatest writers and learning from his experience and insight.

The program will be free and open to the public. A book sale and signing will follow the presentation. Seating is first come, first served.