Samuel Johnson once famously noted that a man who is tired of London “is tired of life.” Some of us feel the same way about children’s picture books. While it’s true that many cover familiar ground — animals, the great outdoors, adventures with family and friends — no two ever do so in quite the same way. And the best of them rediscover the world with such a fresh and inspired gaze that they turn even the most adult of us into children all over again.

Some of the gems that have arrived in bookstores this season include a couple of classic winter tales, a retold Aesop’s fable, poetry about dogs, a baby penguin, and a chicken awash in blue ink. 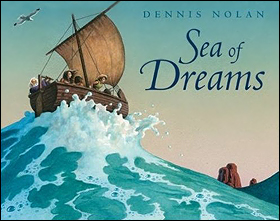 But readers who prefer nonverbal adventures — and the best of picture books do render words superfluous — might want to start with “Sea of Dreams” (Roaring Brook Press, 40 pp.), a magical oceanside fantasy by award-winning author and illustrator Dennis Nolan (“Dinosaur Dream”). In vibrant colors, Nolan tells the story of a little girl who builds an elaborate sand castle, and then must leave it for the night, when its tiny inhabitants emerge to enact a fascinating nautical drama of their own. The little girl returns the next morning — and unwittingly helps the magic to begin again.

In another nearly wordless romp in the great outdoors, award-winning author and illustrator Lita Judge (“Pennies for Elephants”) conjures the story of “Red Sled” (Atheneum Books for Young Readers, 40 pp.). A snowsuit-swaddled young boy must go inside for the evening and leave his red sled leaning against the house. Barely has the dark descended before a bear, a bunny rabbit, a moose, and several raccoons, muskrats, and other forest creatures leap on the tiny sled and begin wild sweeps through the snow. There is no language — just a marvelous progression of “scrunch,” “ssssffft,” “whoa,” and “eeeee” as the critters whisk through the night on the sled. When the little boy awakes in the morning, there is just a scattering of telltale tracks to hint at what his sled might have experienced.

3. “Mouse and Lion,” by Rand Burkert and Nancy Ekholm Burkert

In a retelling of one of the world’s best-known stories, famed illustrator Nancy Ekholm Burkert (“Snow White and the Seven Dwarves,” “James and the Giant Peach”) works for the first time with her son Rand Burkert to produce “Mouse and Lion” (Scholastic, Inc., 32 pp.). Jerry Pinkney’s award-winning 2009 rendition of the Aesop’s fable of the lion who spares the mouse — who later saves the lion — may have seemed definitive two years ago, but in 2011 the Burkerts prove that there is still plenty of room for a new treatment of this timeless tale. In their spare and lovely watercolor version, the tiny mice of the Aha Hills are a particular delight — and ounce for ounce they exhibit full as much personality and individuality as the mighty lion of the Kalahari.

For lovers of both animals and words, “The Hound Dog’s Haiku”
(Candlewick Press, 56 pp.) by Michael J. Rosen with illustrations by Mary Azarian, pairs the gentle wit of haiku with playful woodcuts of 20 different breeds of dogs. (The book serves as a companion to the equally delightful “The Cuckoo’s Haiku.”) My favorite is the beagle’s haiku: “far off, one dog barks/ dreams blur like smoke from chimneys/ he barks at barking.” But each poem highlights the special features of some particular breed, and young readers will enjoy recognizing the dogs that they love best. For those who want to learn more about dog types they don’t know as well, the book includes thumbnail sketches of each breed in the back. 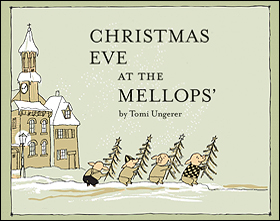 5. “Christmas Eve at the Mellops’,” by Tomi Ungerer

First published in England more than 50 years ago, “Christmas Eve at the Mellops’ “
(Phaidon Press, 32 pp.) by beloved French children’s author Tomi Ungerer, retains all of its original charm in a new edition. The Mellopses are a cozy porcine family with four fine young piglet sons — Casmir, Isidor, Felix, and Ferdinand. When the boys, excited by the idea of Christmas, each bring home a tree, the family finds it has four Christmas trees too many. Mr. Mellops encourages his boys to find other pigs who need the trees more than they do, and in the process the four earnest piglets learn something priceless about the true meaning of the holiday.

A little penguin contemplates his own tiny stature in Emma Dodd’s charming “I Am Small” (Scholastic, Inc., 24 pp.). In block prints perfectly tinted to convey the awesome depth of the Arctic ocean and the glittering expanse of the starry skies, Dodd shows how the knowledge of his mother’s love allows the baby penguin finds peace and safety in his environment.

Oh no! The painting of the barn is almost done in Deborah Freedman’s “Blue Chicken” (Viking, 40 pp.) when one of the chickens snoozing in the coop wakes up and decides to help. Instead of helping, however, she tips a pot of blue ink and splatters herself and the entire painting. Young readers will love to watch how the ink washes over all the other farm animals as well and seems to be creating a hopeless mess — until the resourceful chicken finds a way to save the day.