The Internet has been good at spawning neologisms. One that is particularly indicative of the times is “twitchfork mob:” a group of people using Twitter to protest, harangue, or expose people they don’t like or agree with. In 2011, after the British High Court barred media from revealing the identity of a soccer player who had an extra-marital affair, over 70,000 people took to Twitter to name and shame the sportsman. 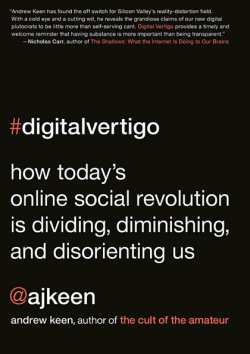 It is this “dumb herd” – and more broadly what he sees as the cult of social media – that author and Silicon Valley entrepreneur Andrew Keen takes on in Digital Vertigo.

“Internet browsers, search engines, and e-mail services – the trinity of technologies that shape our daily Internet use – are becoming social,” Keen writes. If you have a start-up in Silicon Valley, chances are it’s social, whether it’s social gaming or social ice-cream making.

All of this, according to Keen, is a very bad thing. Social media is “actually splintering our identities so that we always exist outside ourselves, unable to concentrate on the here-and-now, too wedded to our own image, perpetually revealing our current location, our privacy sacrificed to the utilitarian tyranny of a collective network.” Rather than bringing us together, Keen argues, social media are dividing us.

Despite what Mark Zuckerberg might think, Keen argues vehemently that we shouldn’t allow our privacy to slip away. He skewers the idea of “publicness” held by web theorists such as journalism school professor Jeff Jarvis. According to Keen, Jarvis argues that living in public “will result in a more tolerant society because everything will be known about everyone and thus traditional social taboos, such as homosexuality, will supposedly be undermined.”

That, as Keen points out, is wishful thinking. One of the problems is that we tend to value other people’s privacy less than our own – and social media has democratized the business of exposure. The social media and privacy maximalists might cheer when the good folks of Twitter out a footballer for having an affair but they might feel differently about social-media-fueled people power when a collective of pro-lifers on Facebook publishes photos of their daughter entering an abortion clinic.

Keen takes on the digital evangelists with their overblown and self-serving claims about the power of the Internet to revolutionize society and bring human salvation. He pours water on the notion that the Internet is helping us rediscover a lost oral and participatory culture and community. Anyone who has ever seen the racist hashtags that occasionally crop up on Twitter, or the legions of extremist, hate-filled Groups on Facebook would know that such sentiments are well meaning but up in the clouds.

But while Keen is right to lambast these digital evangelists promising a new Renaissance (and he does so with verve), it is perhaps an exaggeration to suggest that a new Dark Ages could be imminent. The book suffers from the same failing as many books on the Internet: a selective use of studies and anecdotal evidence to bolster its arguments.

For example, Keen cites a 2007 Brigham Young University social-media study that found that the heaviest networkers “feel less socially involved with the community around them.” But there are plenty of other academic studies that show the exact opposite – that, in fact, social-media users have richer social lives.

Or Keen cites a study that showed that in 2010, among teenagers, use of e-mail was down by 59 percent. According to the author, that meant teenagers were prepared to sacrifice the one-to-one privacy of email in favor of the “public social-messaging platforms like Twitter and Facebook.” He doesn’t mention, however, that both Twitter and Facebook allow private messaging between users and that is how teenagers often use them.

“Might Mark Zuckerberg’s five-year plans to transform the Internet into a brightly lit dorm room incarcerate us all in an absurd global prison where we are all forced to live in public?” Keen asks. Ultimately “Digital Vertigo” doesn’t really answer that question, and the author relies far too much on historical analogies to paint a picture of an online dystopia – the shattered dreams of the California Gold Rush; Britain’s Crystal Palace, a marvel of the 19th-century technological revolution, burnt down as the promises of the industrial age descended into totalitarianism and war.

Through these parallels, the reader is constantly aware that we are all on the verge of toddling off, smart-phones in hand, into the abyss, but we never hear exactly how we’re going to get there or how we can stop it. Lessons from history only go so far.

The issues that really matter – and will help shape our online and offline futures – such as “Do Not Track” or “right to be forgotten” legislation, or the complex debates surrounding engineering and governance of the Internet, are only barely touched on. Privacy in the Twitter age is a controversial issue, raising numerous social, ethical, and technological questions, and here, despite Keen’s polemical and engaging writing, it is given short shrift.

It is good that among the cheerleaders and apparatchiks of Silicon Valley there are skeptics like Keen who are prepared to swim against the tide. Critiques from inside an empire always carry more weight. But ultimately Keen squanders that insider status and just ends up sounding like a grumpy old man telling the pesky kids of Silicon Valley to get their damn Internets off his lawn.