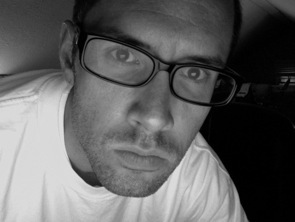 To read John Jodzio is to laugh. But it’s the sort of laugh that starts with a gasp, a laugh that is equal parts “I am highly amused” and “I can’t believe he actually wrote that.”

But he actually does, over and over again, and he gets away with it. In his highly distinctive short fiction, Jodzio goes places most writers don’t dare, and few writers could even pull off if they tried. The title often tells the story, such as “Ackerman is Selling His Sex Chair for Ten Bucks,” or “My Codpiece Smells Like Soup,” so there’s your fair warning; these are not a misleading titles.

Behind the shock factor, though, there are finely crafted, economical little portraits of characters who are actually kind of innocent and really aren’t that far off from believable — doesn’t everyone know a couple really far-out-there weirdos? — and who are often pretty endearing, or at least sympathetic. Getting this balance just right has landed Jodzio a Loft-McKnight fellowship, regular spots in Minnesota Monthly, McSweeney’s, and numerous literary magazines, and two story collections.

But he’s not just a print guy. Jodzio’s stories are golden read aloud, and he’s frequently onstage hearing those laughs firsthand in collaborative events that bring writers, artists and musicians together. If the Twin Cities literary community is changing from an introspective model to a performance-based, community model, it’s in no small part due to Jodzio, who makes writing look not just easy, but fun.

MinnPost: I hear you’re at work on a novel. May I ask how it’s going?

John Jodzio: It is going really slooooow. I heard the siren call of some unfinished short stories and have been spending my energies there lately. I’m about halfway through another collection right now and hoping to finish it up by the end of the year and then return to the novel.

MP: Describe your writing space and what it takes to keep you there.

JJ: It is a spartan room in my house that has a bunch of books and not much else. There is a little ceramic pig on the desk named Chanchito, who is a good luck charm. There is a slightly creepy thrift-store painting of Dwight D. Eisenhower on the wall. Usually I can do the work that needs to be done, but if I am feeling especially squirrely I’ll push a large bookcase in front of the door to make it very, very inconvenient to leave.

MP: You have a very busy calendar of events. Is it just you, or is public performance a bigger part of the writer’s job these days?

JJ: In the book world, promotion has clearly fallen on an author’s shoulders, so if you have a book out you are going to need to do some readings. I really like it — I like seeing an immediate reaction to my work. Also, since I don’t want to have people hear the same stories over and over, having a bunch of readings is a great way to put pressure on myself to finish some new ones. 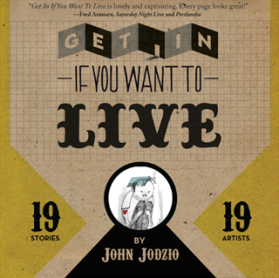 MP: Your latest book came out on Paper Darts, who fantastically illustrated it with a series of commissioned art pieces. You seem to have a sort of an extraordinary relationship with this publishing house. Do they influence you or do you influence them?

JJ: I don’t know if we end up exactly influencing each other, but I think that Meghan, Jamie and I certainly have a shared aesthetic. I don’t have the visual sense or the design skill that they have, but we all like working on fun projects and throwing great readings and drinking and eating nachos. I am really glad our paths crossed and are now semi-intertwined for future literary fun.

MP: You became a father last year. Are you going all soft like musicians often do? Maybe put out a kids’ book?

JJ: I think that my work has actually gotten more strange and demented since I’ve had a kid, so maybe I am unconsciously railing against that softening? Either way, there are some really bizarro kids’ books out right now (i.e. “All My Friends Are Dead,” “Go the F*** To Sleep,” etc.) so I might start pondering that genre more seriously.

MP: Your work is a frequent part of McSweeney’s magazine. And lately, other McSweeney’s writers seem to write the way you do — declarative titles, outrageous situations, short and oh-so-sweet. Are they copying you?

JJ: McSweeney’s has been really influential to so many people my age and I think there is a style and sense of humor that they’ve been cultivating for a while now that is becoming pretty pervasive in a lot of humor and literature. That said, everyone is obviously just copying me.

JJ: The next two books up on my bedstand are Alethea Black’s short story collection, “I Knew You’d Be Lovely” and Dylan Hicks’ novel “Boarded Windows.”