One might think that travel guides — printed guidebook, that is — are becoming a thing of the past. What chance does a paper book have against online forums, where you can get fresh updates on pressing topics like bedbugs, food poisoning and roadwork? But that’s a different kind of travel. Things usually don’t change quite so quickly in the outdoors, so printed guidebooks aimed at hikers and campers aren’t going away anytime soon.

“Books don’t run low on charge and don’t cost a lot of money if they get dropped in the creek,” says Tom Watson, who has two new guides out, “Best Tent Camping Minnesota” and “60 Hikes Within 60 Miles — Minneapolis St. Paul” (Menasha Ridge Press). Both books are updates; Watson has become one of the area’s definitive keepers of the trailhead and tent pad. For 30 years, he’s been writing about outdoor topics in Minnesota as well as Alaska, where he lived for 12 years on Kodiak Island. He now lives in the Prairie Waters region of western Minnesota, in the Minnesota River Valley.

Things do change in our parks and wild places, so Watson spent two summers camping and hiking, revisiting old stomps and discovering a few new ones. His descriptions are meticulously researched; he checked out every campsite in every campground, hiked every trail, and gives detail down to what birds, flowers and trees you’ll see, how much road noise you might hear and what type of restroom facilities you can expect. Campers hoping to reserve a site in advance can pinpoint exactly where they’d like to be, based on his thorough descriptions. Watson says he easily hiked 150 miles, and visited about 80 campgrounds before narrowing it down to 50 for the book. 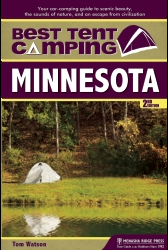 “I grew up a back-packing Boy Scout, so those kinds of campsites [hike-in] are still my favorites,” he says, although most of the campgrounds he writes about are accessible by car. “In the book, there are probably three or four that I consider ‘most favorite’ and a few that I will never reveal.” Fair enough.

Watson includes a bit of natural and human history as he moves across the state, region by region, pointing out Civil Conservation Corps works, settlement misshaps and potential wildlife sightings.

“I am always seeing wildlife, and it’s always spectacular to witness,” he says. “The most impressive sight was a long line of buffalo coming up over a rise at Blue Mounds State Park one morning right after dawn — I felt like I was back 200 years!” 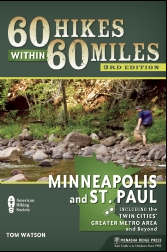 While development is eating away at the edges of most of our public lands, Watson was heartened to see that several trails that had been marked “proposed” on maps when he wrote the first editions of his books have since become reality. But his work shows that in Minnesota, we’re lucky enough to be able to get away from the crush of humanity pretty easily, even in view of the downtowns. It’s not Kodiak, but the potential for experiencing the outdoors is still pretty great here.

“You never really come all the way back from Alaska, and I still miss it dearly,” he says. “However, I am so glad I came back to Minnesota. It’s a wonderful north-woodsy outdoor state.”

Take these Minnesota guidebooks outside (no Wi-Fi signal needed)