A couple of years ago, German-born Katharina Eggers arrived in the Twin Cities to marry her long-distance American sweetheart. She found her new home lively, creative and lacking. What we needed, she thought, was a publication that reflected the spirit of this place and defined it to a wider — maybe even global — audience. So naturally, she started one, on paper to boot, and became its editor. 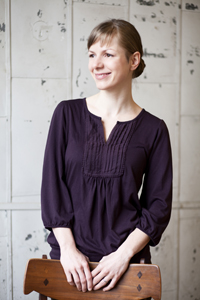 Thirty Two magazine, named for the freezing point that defines this place fairly well (sometimes, anyway), is a bimonthly, subscription-based magazine (with a scattering of ads) that reflects the local — the first issue is out now, and features articles about musician Haley Bonar and bookseller Jay Peterson — but also addresses ideas that reach beyond our region, such as the role of the creative class in local economies.

It is not a literary magazine, although it includes literary topics and voices, and it is not a regional magazine, although it aims to capture the essence of what life here is all about. With a conspicuous lack of botox ads and restaurant reviews, Thirty Two is unlike any other local publication — although fans of the departed Rake magazine will draw comparions to that publication’s smart writing and ambitious ideas.

As a newcomer, Eggers isn’t interested in revisiting Garrison Keillor and Mary Tyler Moore. Instead, she wants a publication that speaks to transplants like herself, to people elsewhere who are curious about the area, and to locals who appreciate thoughtful, high-quality writing that comes from here but reaches beyond.

MinnPost: What publications do you consider models for Thirty Two?

Katharina Eggers: We draw inspiration from very different publications. The Oxford American and Garden & Gun are examples very successful regional publications who are not afraid to look outside of their regional borders. German and other European magazines are a continuous source of inspiration in terms of design and innovative features. Here in the Twin Cities, Paper Darts has done a fantastic job in showing how the DIY approach can be successful, and that it is possible to build a community around a magazine.

MP: Who do you see as your audience?

KE: We never wanted to appeal to one demographic. We figured we would work on the content first, establish a voice and then see what kind of people will find us. After a month of sales, I think I can say that we have had success in attracting people of all walks of life and of all ages. It feels great to have subscriptions coming in from lawyers, artists, bankers and fellow writers. That tells me we might be onto something.

KE: The term “literary magazine” has been used by other people. We see ourselves as a current affairs & culture magazine, which of course, also includes literary coverage. So the focus is very different. But we don’t want to replicate the great writing that is already out there – in fact, we are working on creating partnerships with other small publishers. What I hope will be our unique contribution consists of carefully curated, in-depth and fearless features about our region and the larger Midwest that wouldn’t make it into more commercial publications for one reason or another.

And while the regional dimension is important, as somebody who did not grow up here, I think my job is to question a reflex that many writers seem to have been conditioned to have: “I want to write about this, because it is so Minnesotan.” Really, is it? What does that even mean? Instead, simply tell me what makes this an interesting regional topic. That being said, it’s easier said than done.

MP: You’ve said that the Twin Cities hasn’t made a widespread cultural impact. Have you considered the possibility that we are a modest people and don’t want the rest of the world staring at us?

KE: I have never said that we haven’t made a widespread cultural impact, but instead, that it is underappreciated in the rest of the world. People talk about up-and-coming cities like Helsinki, Amsterdam, Wellington, Berlin – but in my experience, Minneapolis is never one of them. At the same time, there have been bold initiatives here in the Twin Cities that want to brand our region as an international hot spot akin to Paris and Tokyo. While I admire the ambition, I think we agree that there is nothing modest about that.

To get to the heart of the question, am I aware of how modest this region is? I have heard more about Midwestern modesty than I could have ever hoped for. In fact, some people that I have met here have attributed my introvert personality to having lived here for a while, as if modesty is a learned behavior that can only be acquired in the Midwest. And while people may be modest, I have never lived in a place that is more preoccupied with its identity and its place in the world than the Twin Cities.

I admit that Thirty Two is guilty of the same charge – but like so many other organizations in town, we’d like to do our part in changing that. We’d like to contribute to creating something that speaks for itself, so that one day, we can free ourselves from these insecurities and simply lay back and enjoy our cities.

MP: Give me three examples that make you believe print isn’t dead.

KE: Regional magazines are not faring too badly. I believe that if you provide quality content along with a beautiful object to behold and to cherish, you can survive. I don’t like how the word “boutique” has been overused, but the success of many independent publications that rely solely on subscriptions proves that it can work.

Secondly, we have been talking with online editors from all across town, and they seem very interested in content partnerships. There are some great online-only outlets, but some editors are worried that the great features they invested in don’t have the shelf-life they deserve. That’s where print comes in.

And finally, people are tired of being alienated by modern life. That’s why they go back to farmers markets, bicycling, growing their own food. There is no reason that print couldn’t be part of this return to simplicity and authenticity – it’s a product that you can understand, and you don’t have to have an advanced degree to know how to fix it, if something goes wrong. You can focus on the content, and it gives you the mental space you need to reflect on what you have read.

Besides, the sensual experience remains important. Apple may seduce people with its design, but when I saw a hulky, tattooed, pierced man at a record shop sensually grace our paper with his fingertips, I knew print still has its place.

MP: What do you admire about the local literary scene?

KE: The camaraderie, the openness and enthusiasm to collaborate — whenever people come together over their shared love for art, something great happens. The fact that we still have many independent bookstores and many publishing houses speaks for itself. My dad, who works in an independent bookstore in Germany, looks at the size of the Twin Cities and everything that is going on here, and wonders: “How is this possible?”

Thirty Two magazine: Current affairs and culture — and all on paper