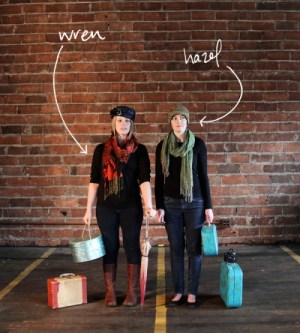 A long time ago, I heard the Twin Cities’ literary scene described as being a bunch of middle-aged ladies in Scandinavian sweaters writing their memoirs while sipping tea at a window in front of a birdfeeder. That may never have been true, but it certainly isn’t true now. Today, some writing might go down in front of the sparrows, but the literary scene has moved into the bars, galleries and bookstores, thanks to various local entities who know how to put on a good party.

Hazel & Wren, an online community devoted to keeping Twin Cities writers connected, is one of the chief instigators. Started by Melissa and Amanda Wray, two creative sisters who wanted to stay connected to the writing scene while working non-literary day jobs, the site was supposed to be a blog.

“We had always talked about starting a literary magazine, but thought that a blog would be something more manageable with our day jobs,” says Melissa Wray, a writer and editor; Amanda is a graphic designer.

More than a blog

The site still centers around a blog, which shares writing tips, publishing tips, book reviews, promotion ideas and other matters related to being a writer — or a reader. But it’s become more than a blog, with writing prompts and a useful calendar of (un)deadlines listing writing contests and other motivating deadlines.

Even better, every now and then, Hazel & Wren puts on a party. These center around open-mic events in which writers try out their stuff with a live, friendly audience. On Aug. 26, the literary world collides with the art world as Hazel & Wren collaborate with Ad Hoc Art to host a Literarty Party. The event includes contests and activities and a social hour, during which writers can sign up for open mic slots. Local writers Rob Callahan and Courtney Algeo are also scheduled to read. And then there’s dancing.

“Open mics are great even for those who don’t actually go up in front of the microphone. Sitting in the audience, soaking up all of the diverse work, it’s pretty hard to leave an open mic and not have a bunch of new ideas and inspiration for your own work by the end of the night,” says Wray.

What about those shy writers who don’t want to perform at an open mic? “For those writers who are true hermits, we have online ‘open mics’ every month. They are basically online writing workshops, where the writers who submit give each other feedback. No one can see your face!”

The upshot of all of this is that, while writing is still a solitary pursuit, being a writer is a more social endeavor than ever.

“I think Minnesota writers are being more social because they have this wonderfully supportive and creative community to engage, encourage, and challenge them,” says Wray. “We know that at least three writers who were invited to read elsewhere or had their work published as a direct result of reading at our last open mic, Words at WAM. But even for the seasoned writers, interacting with peers is always a great thing: bouncing ideas off of others, working on collaborative pieces, or just getting exposed to what’s currently happening in the community might spark your own next great writing project.”

Hazel & Wren are changing the way writers do business