Michael Perry’s name comes up often when people talk about the next possible host for “Prairie Home Companion.” He does seem to have the basic qualifications. He’s a writer; his books include “Population 485: Meeting Your Neighbors One Siren at a Time,” “Truck: A Love Story,” “Coop: A Year of Poultry, Pigs and Parenting and a new one, “Visiting Tom: A Man, A Highway, and the Road to Roughneck Grace.” He’s also good on stage, and fronts the Longbeds, a country folk group. He’s comfortable with public radio too; he’ll be on Michael Feldman’s “Whad’ya Know” on Aug. 18. He’s self-depreciating, like Garrison Keillor.

But he’s funnier than Keillor, and he’s from Wisconsin, and it seems doubtful anyone would be able to take him off the farm; for Perry, small-town living is no radio schtick.

“I might miss my pigs,” says Perry, who enjoys the freelance rural lifestyle immensely (when he’s not hilariously cursing it). “Also, it is easy to underestimate the vast reserves of time and talent it takes to do what [Keillor] has done week after week, year after year.”

Perry’s no slouch himself, though. In addition to the pigs and books, he’s a busy freelance magazine writer, works as a volunteer EMT with the Auburn, Wis., fire and rescue service, and is raising daughters. He’s finishing a young-adult novel and starting a book about French Renaissance essayist Montaigne, of all people. (“I like Montaigne because he classified himself as a well-read stumblebum, and I can relate. That and he said we are all walking contradictions. I paraphrase, but I agree,” Perry explains.)

So, while Keillor sits in St. Paul and ponders the nature of small-town life from his midcentury memories, Perry manages actual livestock, maintains cantankerous farm equipment, and pays attention to the weather. “I just talked to my brother about his corn. It’s been tough. Not much more to say.”

Perry understands country life minutely, and conveys it to urban audiences with such humor and appeal that many back-to-the-landers consider “Truck” to be a guidebook. But he also understands why small towns can mystify. He’s adept at taking the outsider’s perspective, and is many ways he doesn’t entirely fit in himself. 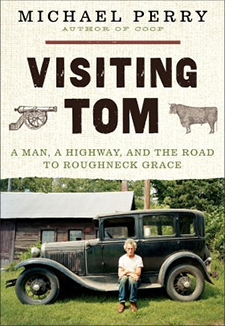 “When I ask my neighbor to come up and plow my corn patch because I’m on the road, he doesn’t ask how I vote, he just rolls on up here,” Perry says. “Then later I help him bale hay, and then we have a common base to work from.”

One such neighbor is Tom, an 82-year-old farmer with a cannon in his front yard and a vast wealth of arcane rural knowledge. Perry decided Tom’s collection of stranger-than-fiction tales from his years on a farm near a highway had to be captured for posterity; rural life is alive and well, but it’s also not the same as it once was. In “Visiting Tom,” Perry follows his neighbor around and tries to capture some of his country wisdom, and country weirdness. Tom — not his real name — is not your typical octogenarian.

“Last time I was over there he was wearing cutoffs and had been chasing a bear,” Perry says. And that’s the news from Auburn.