It will all be over soon. The polls, the lawn signs, the painful Facebook battles, the ugly debates and finally, the election itself, will come to pass, one way or the other. And that will be a relief. But maybe you’ll miss it. Maybe politics is your favorite sport. In that case, three new books that revisit Minnesota’s political past will give you something to mull over until 2013. In his new memoir, “Becoming Wellstone: Healing From Tragedy and Carrying on My Father’s Legacy (Hazelden), Paul David Wellstone Jr. describes life as the son of Paul and Sheila Wellstone. He shares anecdotes of a childhood filled with sports and politics, as well as the strange world he was thrown into when his parents, along with his sister Marcia, died in a plane crash 10 years ago this month. Sons David and Mark were left to wrestle with the their private grief for public figures, and watched as mourning their family become a partisan activity.

David Wellstone left Minnesota for California in an attempt to escape the endless reminders, often from well-intended people, of his loss. At times the book veers into spiritual journey territory, but it comes back to politics when Wellstone realizes that part of his healing process must involve finishing the business his father left undone. He goes to Washington to help pass the mental-health parity legislation his father championed, and in 2008 the Wellstone Mental Health and Addiction Equity Act passed into law, requiring insurance companies to cover mental health care and addiction treatment. He succeeded  in large part because he worked with House Republicans, especially then-Rep. Jim Ramstad, an old friend of Paul Wellstone and a recovering alcoholic. The legislation was one of the few bipartisan accomplishments of recent years, and Ramstad called the bill his most important accomplishment.

Bipartisan success stories are part of what made Minnesota a national leader in education, economic prosperity and environmental stewardship in the 1970s, even while the rest of the country was roiled by social upheaval. Tom Berg’s “Minnesota Miracle: Learning From the Government That Worked” (University of Minnesota Press), explains how, once upon a time, Minnesota demonstrated a rare degree of political collaboration, respect and fairness between the parties. 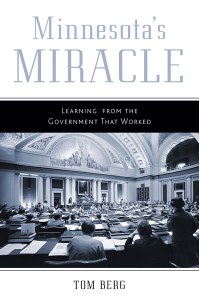 Berg served as a state legislator in the 1970s and later as a U.S. Attorney for the District of Minnesota, and was privy to many of the key events that shaped Minnesota politics during its most bipartisan years.The end result: legislation that helped the state become known across the country for its high quality of life, good employment opportunities, well-educated work force, carefully managed resources, and beautiful outdoor recreation opportunities. Berg walks us through key pieces of legislation and how they fared, as well as a few that didn’t make it beyond the Capitol. (That amendment to regulate streaking — yes, nekkid people — never went anywhere.)

Walter Mondale, Wendell Anderson, Martin Sabo, Nick Coleman, Joan Growe, Al Quie, Arne Carlson, Jesse Ventura, and Tim Pawlenty all make a comeback on these pages, and Berg goes behind the scenes to show how they dealt with the issues of their day (many of the same issues are back today) and delves into the minutia of tax distribution, presidential aspirations and bipartisan decisionmaking across the past 40 years. Berg offers plenty of insights and suggestions, should anyone care to try getting along.

A focus on Sen. Nick Coleman 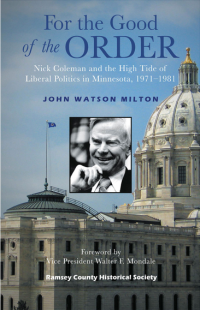 John Watson Milton, former Minnesota senator and health-care policy expert, treads some of the same territory in his new book, “For the Good of the Order: Nick Coleman and the High Tide of Liberal Politics in Minnesota, 1971-1981” (Ramsey County Historical Society). He focuses on Sen. Nick Coleman as the star of his story, which starts as a biography of the late politician, then expands to reveal the workings of Minnesota politics during what he describes as a highpoint in civility in politics as well as a time when legislators worked, very effectively, for the benefit of the citizens.

Milton’s book is for the true wonk: Nearly 700 pages chronicle, in painstaking detail, specific pieces of legislation as well as the personal lives and work habits of their authors, during Coleman’s time in office. Newspaper clippings, Senate floor speeches and editorial cartoons illustrate these battles. Coleman died in 1981, at the age of 56, and left behind a legacy of good works, though Berg notes that much of Coleman’s legacy has been buried in bipartisan rancor and reversals on many of the policies that made Minnesota so miraculous in those days.