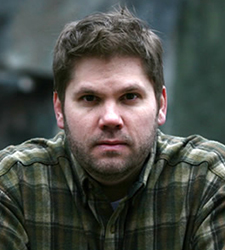 Peter Geye is a city guy through and through, but you wouldn’t know it by his books. His first novel, “Safe From the Sea,” is set on the stormy shores of Lake Superior, and explores the relationship between an aging father and his son, a bond complicated by a tragic Great Lakes shipwreck. His new book, “The Lighthouse Road,” is set in the woods of Northern Minnesota during the late 1800s’ logging boom. Yet Geye grew up in North Minneapolis, and lives in the city again today, after a stint out of state for graduate school.

“But I grew up camping in state parks and spending a lot of time in the woods, and I always loved it. From my very earliest memories, I’ve been in awe of Lake Superior and the north woods and wilderness areas, and I can’t get over it,” said Geye in an interview. “But because I’m not always there, I have a sort of longing for it, and that quality of wistfulness about a place is made more alive in my imagination and it comes into my fiction.”

The central female character in the book, a young Norwegian woman working as a cook in a logging camp, looked out at Geye from a photo in a book of Northern Minnesota images. “For years I would stop at this picture and I began imagining a life for her. I felt this compulsion to tell this woman’s story. And when I was contemplating this woman’s life, I had in mind a Shakespearean tragedy, big outsized emotion, sad and tragic.”

Shadows, snow, and the awe-inspiring backdrop of a virgin arboreal forest give Geye’s book a melancholy magic in this distinctively Minnesotan frontier tale. Several writers have moved to the North Shore to immerse themselves in the energy of that landscape, but Geye pulls it straight from memory. Although he says he would happily move up north, except for his wife’s career in the cities. And her career enables Geye to be a stay-at-home dad to their three children, and write on the side — although the demands of young children make it challenging. “The Lighthouse Road” was written almost entirely at a Dunn Brothers coffee shop. 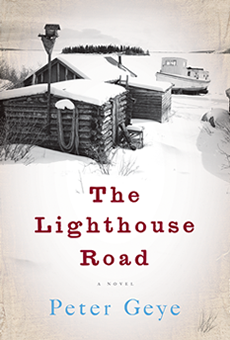 “Before kids, I would write after my wife went to sleep, between 10 and 2 at night. I could only work in absolute quiet stillness without distraction. Now I can handle the noise of a busy coffee shop with 1,000 people coming in and out, because I can tune them out but I can’t tune out three little kids pulling on my pant leg trying to get my attention.”

Fatherhood has changed Geye’s perspective as a writer as well as his ability to focus. His first book explored the generation gap between immigrants and their children, and between a repressed Norwegian male tradition and a more expressive younger generation, emphasizing the son’s perspective. “The Lighthouse Road” puts the burden on the parents as an adoptive father struggles with betrayal and his own mistakes, as a young mother tries to overcome trauma, and as a boy without a father learns how to become one.

“Before I had kids, I identified with my family and parents, and looked up to my father and admired him and thought about the world as his son. Now I look at the world as it relates to my own children. Now I have a downward gaze instead of upward,” he said. “I see the world differently now, and I worry about my kids’ future and about the difficult times in life they will inevitably face. I know they won’t always have easy and fun times, and that’s a melancholy thing to understand. And that sense of worry, and acceptance that life is difficult and surprising, has become a part of my writing. But it’s beautiful too, and I try to capture that.”