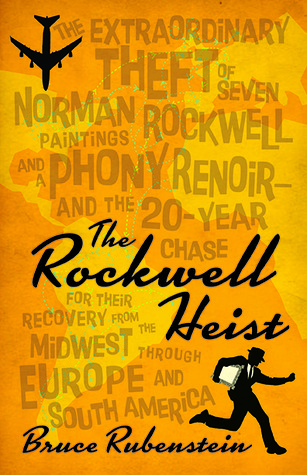 One infamous night in February 1978, Elayne Galleries in St. Louis Park was robbed. The thieves made off with seven significant paintings by Norman Rockwell, as well a slightly damaged Renoir (or was it really a Renoir?). The crime went unsolved, and for more than 20 years, the paintings were lost in the mists of the international stolen art circuit, until one by one, they resurfaced. So who done it?

Elayne Lindberg, the charismatic gallery owner who remade herself from a cafeteria bus girl into a handwriting expert, then department store detective at Dayton’s, had unusual insights into the criminal mind and mode, as well as obvious knowledge of  her gallery’s security system. Perhaps it was an inside job.

No? Then maybe it was the Pinkerton guard hired the night of the gala art opening, who was conveniently away from his post during the theft.

Or what about one of the paintings’ owners, who stood to collect insurance money? Or specifically, the owner who was already being investigated by the FBI for money laundering?

And then there was the group of three guys who stopped by the gallery before the opening, and paid such unusual attention to the doors, windows, and security protocols, that everyone’s alarms went off. Russ Lindberg, Elayne’s husband, even took down their license plate when the guys left.

Nobody wanted to talk

In “The Rockwell Heist” (Borealis Books), longtime Twin Cities crime writer Bruce Rubenstein follows these and other possibilities to reveal the true story of what really happened to those paintings — or at least, as close to the truth as he could get. Because, even though the paintings were recovered, Rubenstein found it tough to get people to talk about the Twin Cities art world’s most notorious theft.

“Gallery owners don’t want to talk about theft. They don’t want people to think their security is bad or that some of the stuff hanging in their gallery is fake. It’s a sore subject in that world,” said Rubenstein, who, in his research, discovered numerous Minnesota artists have a spot on the international registry of stolen art.

He also faced closed doors from law enforcement. But the writer had good contacts from his years covering crime for publications like City Pages and Minnesota Monthly, for whom he wrote about the theft in 2010, and eventually a door opened.

“I spoke to several Hennepin county prosecutors who indicated that they knew quite a bit about it but weren’t going to talk. But one of them put me in touch with an informant,” said Rubenstein, who also fielded anonymous tips, spent time with the 1,000 page FBI report, conducted an unrecorded interview with an informant who didn’t want his voice on tape, sorted truth from fiction, and ultimately got one of the perpetrators on the phone.

“He wasn’t happy that I called him,” he notes.

What started as a local theft quickly evolved into an international crime story, and Rubenstein reveled in following the twists and turns. “I hope you find out who did this, because I’ve always been curious about who did it,” Elayne’s daughter Bonnie told him, and he’s satisfied that he’s answered her question in his book.

He also enjoyed learning about the art world, and particularly the somewhat strange world of Norman Rockwell aficionados. Since 9/11, the artist has enjoyed a surge in popularity, especially among a certain demographic: “A — politically — kind of conservative person with quite a bit of money,” Rubenstein says. “They are people who like to reflect upon a bygone era, and the depiction of which is partially fantasy. They are not just fond of [Rockwell’s] work, they like to visit the area in which he lived, Stockbridge, Massachussetts. Rockwell was famous for using local people as models, so they drive around and look for those people, many of whom are still alive.”

Perhaps the locals find this annoying, but to Rubenstein, who has spent his career mostly pondering murders, this was refreshingly wholesome — as was writing about a crime that didn’t involve murder.

“I’m actually pretty tired of murder,” he admits. “One of the things I liked about this story is that everyone died a natural death. The thieves did a pretty good job, pulled off this spectacular crime, and no one got hurt in the end.”