Many days, if you look down to the end of the bar at the Blue Moon coffee shop in South Minneapolis, you’ll see a young man with a cane standing over a laptop, typing steadily, maybe with a little maniacal glint in his eye. Here, William Alexander escapes the demands of his students — he’s an MCAD instructor — and his children — he has two tots — and has tapped out two books so far, the National Book Award-winning “Goblin Secrets,”  its new follow-up “Ghoulish Song,” as well as a couple of works in progress. Alexander is a fixture here, undistracted by the steam and bustle.

“It’s surprisingly undistracting!” he claims. “Especially if you wear great, big, nobody-bother-me headphones and crank the music loud. If I write at home then I’m distracted by all the homey stuff that needs doing. Like dishes. But at the coffee shop I can focus on my notebook and sip fine coffee that I didn’t have to make myself.”

And there, he can go into another world. For several years, that was Zombay, a futuristic Middle Ages run by an evil mayor, populated by ghouls, goblins, and a put-upon regular sort of folk who occasionally, unwillingly, donate their hearts to power fantastic gear-driven machines. The setting of three books (so far), Zombay is a dank, frightening and unfair place, with just the barest glimpses of beauty here and there. Although he didn’t plan it that way, these are books for kids.

‘I never set out to write for kids’

“I never set out to write for kids. But I’ve never loved books more than I did then. I wanted to write something that inspires the same sort of intensity I felt when I was 11 years old and reading my own favorite books. Adults don’t respond to books the same way,” he says.

The books are aimed at middle readers, the years between “Harry Potter” and “The Hunger Games,” although adults are picking them up too, perhaps because Alexander is wrong, and we old folks do still have the urge to hear a good fairy tale. Alexander should know that; he studied folklore in college, where he also planned a future in theater, which was derailed by a painful spinal condition. That’s literature’s good fortune. So it’s no surprise that his readings are absolutely lacking in stage fright, and his stories read like old, old folktales that are scary and sadder than sad can be.

“We do need unsettling stories to help us cope with unsettling events. Trauma is lonely, but less so if we’ve been there before, holding hands with fictional characters while they found a way to muddle through. That was absolutely my experience,” says Alexander. “And all sorts of ordinary things can be traumatic. My toddler son has nightmares about his favorite chair, but creepy picture books that reflect his own fears help him learn how to handle them. It works like a vaccine. Fiction gives us grim topics in manageable doses.”

The world of steampunk 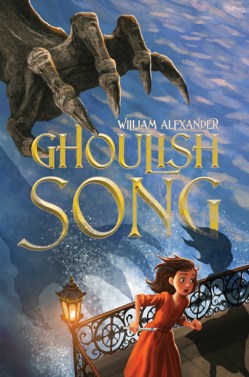 Alexander’s Zombay stories also initiate young readers into the world of steampunk, an offset of science fiction and fantasy that merges a stark, stylized Victorian primness with elegantly inhuman (and sometimes inhumane) machinery. Citizens of Zombay might swap their hands for gear-worked prosthetics, or ride in carriages drawn by mechanical beasts of burden. It’s gorgeously creepy stuff, and yes, just wait for the movie to prove it, but there’s something horribly wrong here, too: All these machines are powered by coal. And coal, in Zombay, is made from human hearts. That’s reality, not a crisis, in these tales — so far, anyhow. But it is deeply unsettling.

“For some reason we are now telling the sorts of stories that we used to set in the future by setting them in the past instead. Maybe we need to work out our anxieties about technology and empire by writing about the industrial birth of modern tech — hence the steam. Maybe we always romanticize whatever part of history is just out of reach, beyond living memory. Maybe clockwork robots and prosthetics are just unspeakably cool and we cannot resist them.”

That could be it. Or it could be that Alexander is just really good at getting to the heart of the matter, the story inside of the story that feels like one we’ve always known. Like a fairy tale, a folk tale, or the latest attempt to explain the human condition in a world that is increasingly being taken over by machines. Sound familiar?